One of the interesting elements that came out of some of our discussions at the IEDM conference this year revolves around the present deployment of EUV. Currently only one company makes EUV tools, ASML, and the deployment of these to the various foundries that are on the leading edge has been a topic of some discussion here at the event, especially as we start talking about 7nm, 5nm, 3nm, and new generations of tools.

One of the interesting metrics that we’ve seen from ASML is the total number of 300mm wafers that have been enabled through EUV. Early adoption of EUV actually started all the way back in 2013, and it took until 2017 to push through over 1,000,000 wafers. In 2018 another 900,000 wafers were processed, and through 2019, with chips such as Huawei’s Kirin 990 5G, Qualcomm’s upcoming Snapdragon 700 series, and Samsung’s own EUV efforts, another 2.5 million wafers have been processed, showing an explosive CAGR of 95% since 2016. 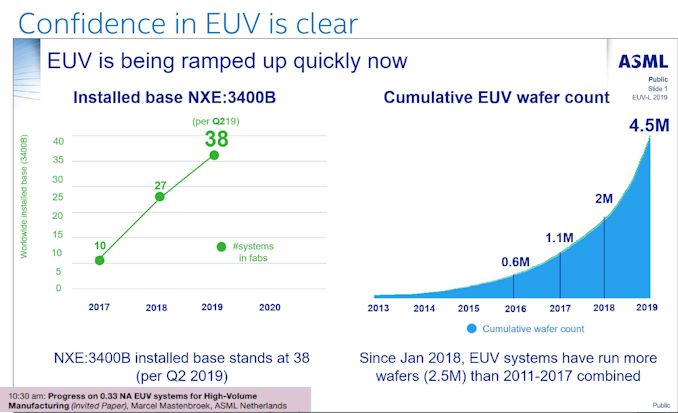 Along with that, ASML’s NXE:3400B Step and Scan machines have been at the heart of most of this EUV production. As the graph above shows, 38 machines were installed by Q2 2019, and through 2019 the B versions have been replaced with the NXE:3400C editions, which can process at peak 175 wafers per hour. 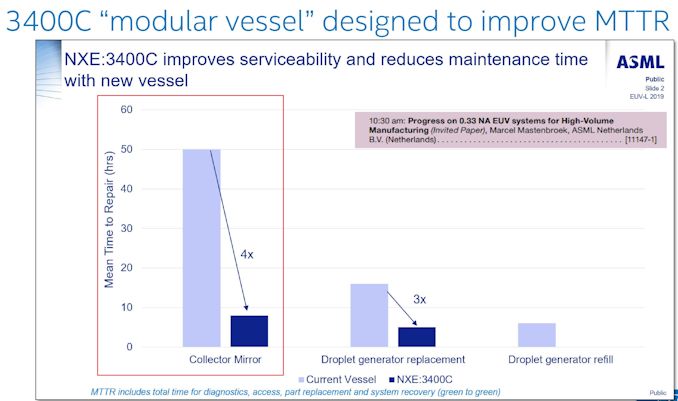 One of the advantages of the NXE:3400C models is the modularity in its design, meaning that a mirror defect should take only an 8-10 hour replacement, rather than take the machine out of action for a full 48 hours.

A note on EUV machine uptime is a key metric: ASML states that their average uptime (a 13-week moving average) is around 75%. This includes a series of ongoing updates to the machines, whcih take about 10% of that downtime: customers who want persistance on their machines without direct updates (or less frequent updates) end up with an average uptime of around 85%.

(Update: originally this article quoted uptimes from a different machine due to a miscommunication. The article has been updated to reflect ASML's latest numbers.) 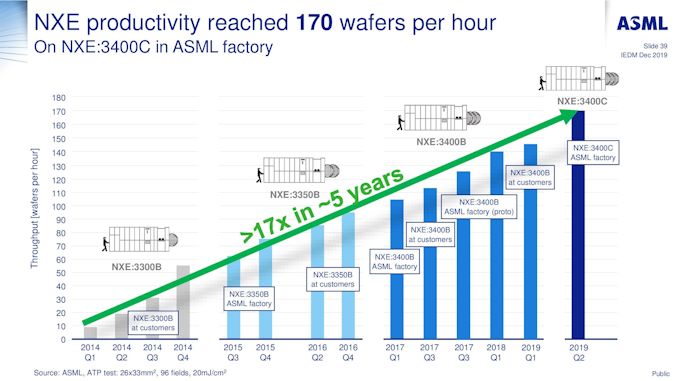 Beyond the NXE lines of machines will be the EXE:5000 series. What makes these machines different is that they are built for the equivalent of TSMC’s 3nm / Intel’s 5nm processes by using ‘High-NA’ technology, technically moving from 0.33 NA optics to 0.55 NA optics, which will help improve manufacturing features at smaller and smaller resolutions. It will be interesting to see if the speed of the High-NA EXE machines will be similar or better to the NXE machines. Based on ASML’s presentation, High-NA machines should be coming into the market by 2023, by which time EUV use should be extensive at the leading edge.