NVIDIA announced a number of things at Supercomputing, such as an Arm server referece design. Despite the show being the major hub event for high-performance computing/supercomputers, it isn’t often the location where NVIDIA launches a GPU. Nonetheless we saw a new model of NVIDIA’s high performance Tesla V100 at multiple booths at Supercomputing.

The new GPU we saw was called the V100S (or V100s). Firstly, the name: I didn’t realise it was new/unannounced until it was pointed out to me. The way it was written on a few of the billboards looks like it is just referring to ‘multiple V100 units’, but a couple of companies confirmed to be that it is a new product. For these vendors, they were actually told before the show that NVIDIA was planning to announce it there, and were surprised that the CEO Jensen Huang did not mention it in his off-site two hour presentation to press and partners.

Nonetheless, NVIDIA’s partners had printed the billboards, built the displays, built the systems, and hadn’t been told *not* to show it off. So they did. I was informed to look out for the gold shroud at one particular booth – they were differentiating by having the standard V100 with a green shroud, and their V100S will have a gold shroud. This is despite the gold shroud units also just say ‘V100’, which is meant to signify the family of the card. 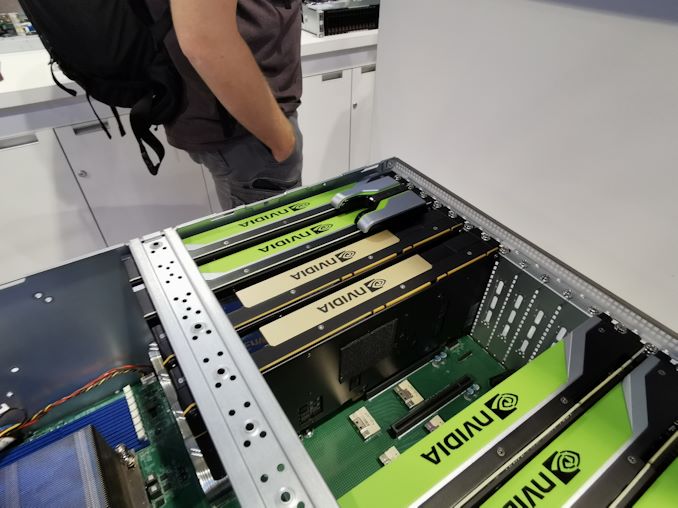 Finding out what is different about this card has actually been a task – none of my usual contacts seem to know exact numbers, although a couple confirmed it was ‘faster memory’, referring to the on package HBM2. I’m still looking into exact frequency changes, and presumably the knock on effects on TDP, but as it stands ‘faster memory’ is the only information I have. There might also be a price difference for anyone interested in these variants.

One thought is that NVIDIA might not actually announce the V100S as a separate model, but just a higher memory version of the V100 and customers will just have to check exactly what the memory frequency is when they purchase – just like different consumer cards can have different memory speeds. No-one was discussing exact launch timing, but it seemed NVIDIA’s partners were deep into validation, if not already offering them to select customers.