Good for Gaming, but Can’t Touch the GTX 485M

As for gaming performance, this is the real purpose of the G73 series, and here the Sandy Bridge only offers moderate increases in most titles. This is why either the 470M or even the 485M as an option in the G73SW would have been good, although that would bump the price up even higher. MSI’s GT680R also includes a “Turbo” feature, only this time instead of overclocking the CPU (as in the previous generation GX640), it overclocks the GTX 460M slightly. GPU memory speed is unaffected, so the benefit ranges from negligible to potentially 5% thanks to the GPU overclock (708MHz instead of the stock 675MHz). In practice, there’s a bit more variance than that, but it’s typically just the margin of error for gaming benchmarks. 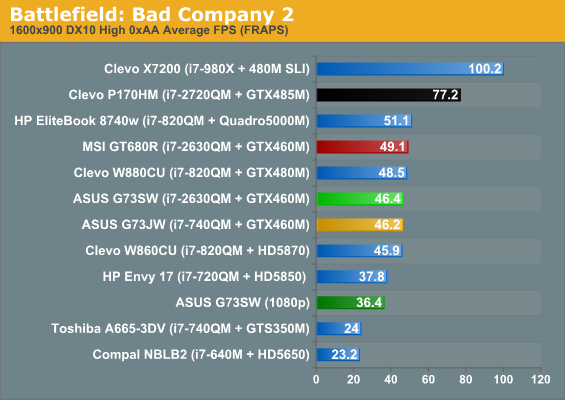 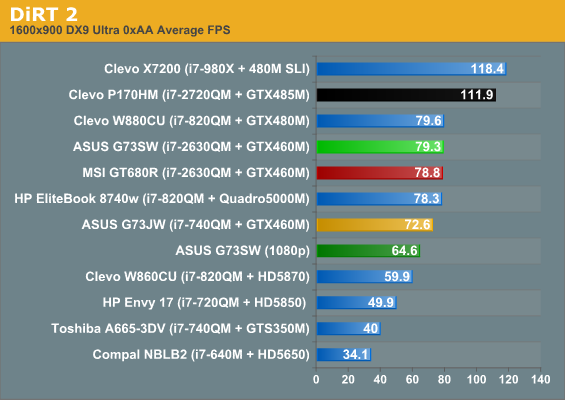 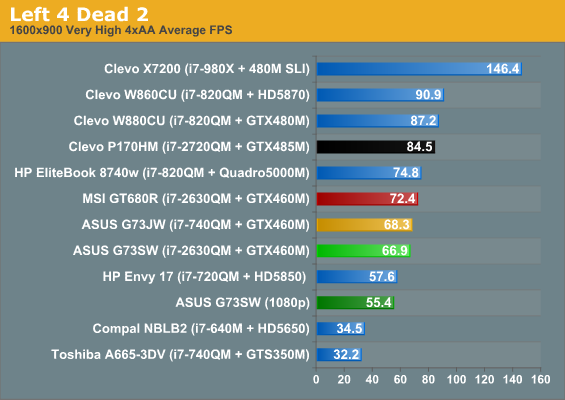 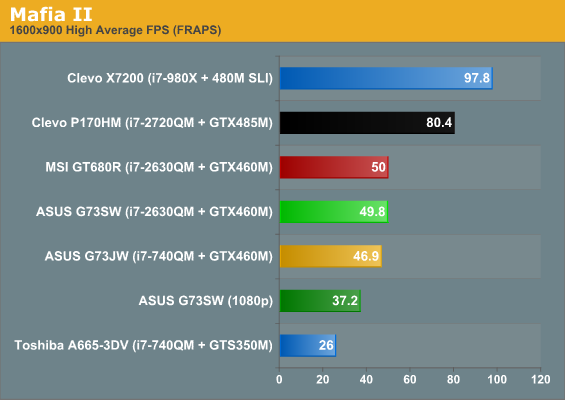 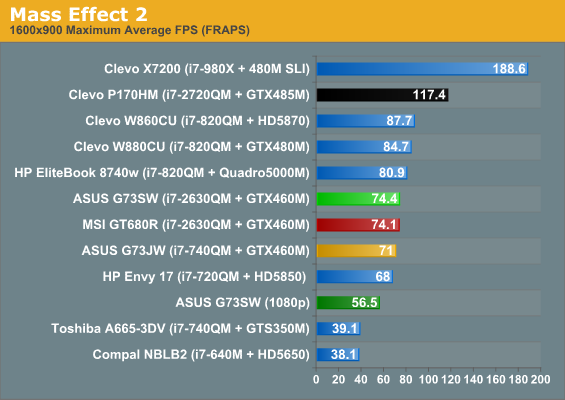 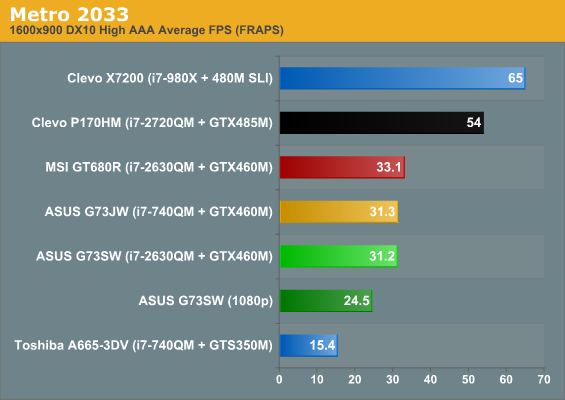 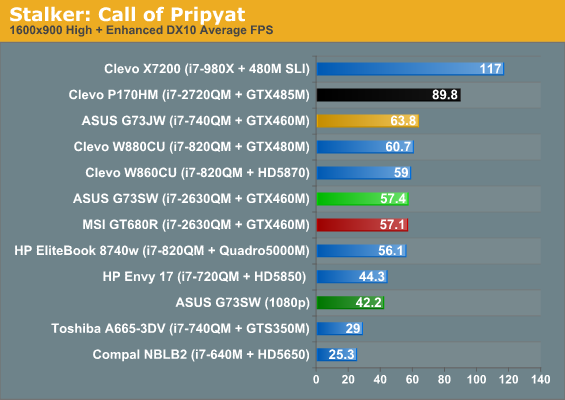 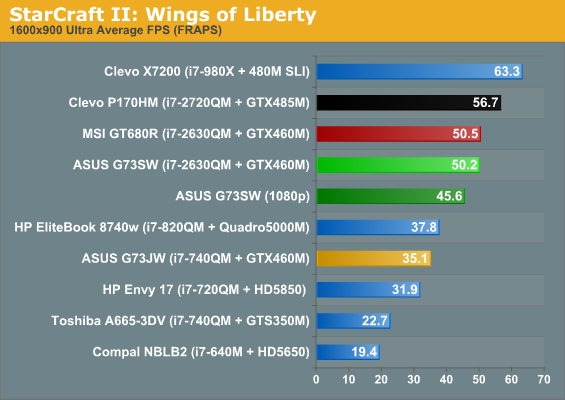 Starting with our High Detail benchmarking, the first thing to note is that all games are playable (i.e. above 30FPS), and even at the LCD’s native 1080p all games remain so, with the exception of Metro 2033. That happens to be a punishing title on even the fastest of GPUs, so we wouldn’t worry too much about the lower score. Also worth noting is that for some reason, both the G73SW and the MSI GT680R scored exceptionally high on the STALKER benchmark; there’s apparently something wrong with our test resolution of 1600x900, as 1600x1024 and 1366x768 both ran much slower. We’ve chosen to scale the 1600x1024 result by 13.8% (i.e. 1024 is 13.8% more than 900) as the 900p score of 114.6 is clearly wrong—we’re just not sure why the test runs so much faster than other resolutions. This appears to be a bug in the 266.58 NVIDIA driver, as performance with older drivers was as expected.

As far as comparisons go, the G73SW ends up being anywhere from 10% slower to 10% faster than the older G73JW. In theory, it should never be slower, but driver changes likely account for the discrepancies. The performance in BFBC2, L4D2, and Metro 2033 remains unchanged (i.e. the new CPU doesn’t change the performance at all); DiRT 2 and Mafia II are 6% and 9% faster, respectively; finally, StarCraft II is the poster child for Sandy Bridge, as performance is up a healthy 43%. Moving over to the MSI GT680R comparison, as expected the differences are generally negligible. BFBC2 and Metro 2033 are 6% faster and L4D2 is 8% faster, while the remaining five titles are within 1% of each other. And then there’s the P170HM with GTX 485M, which is anywhere from 13% (StarCraft II) to 73% (Metro 2033) faster than the G73SW. Actually, only L4D2 and SC2 are under 25%; the other six titles show an improvement of at least 41%. 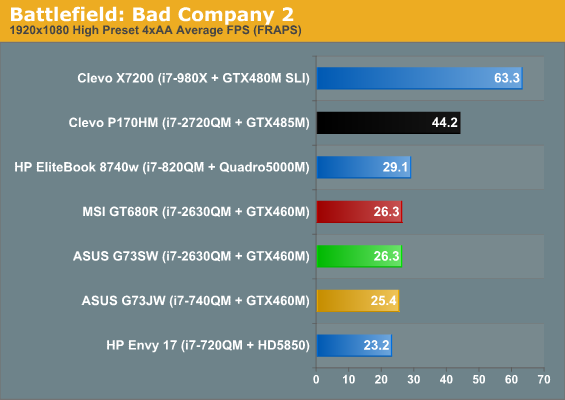 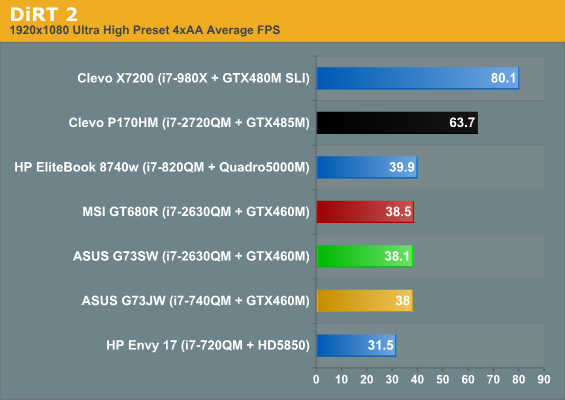 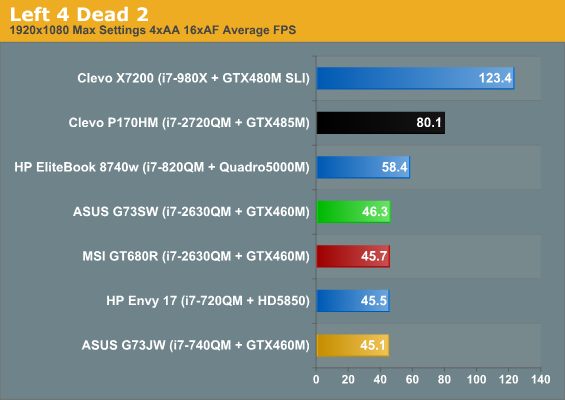 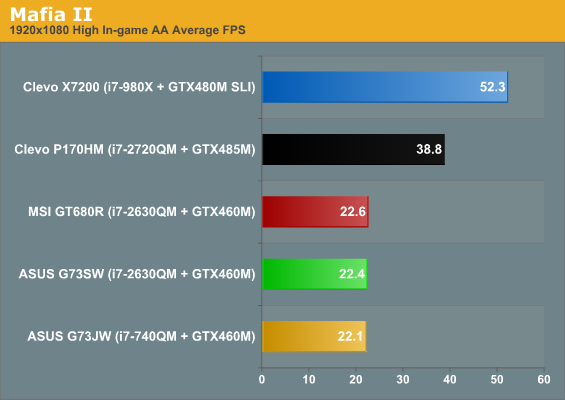 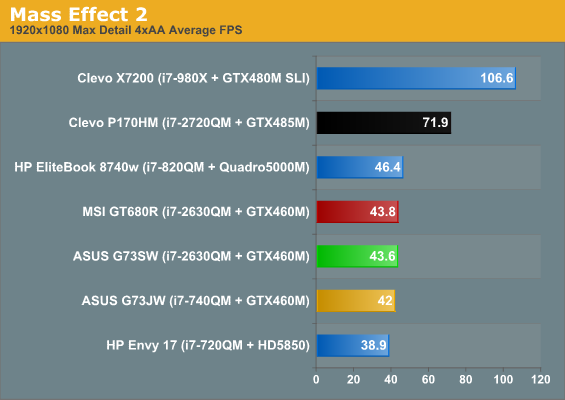 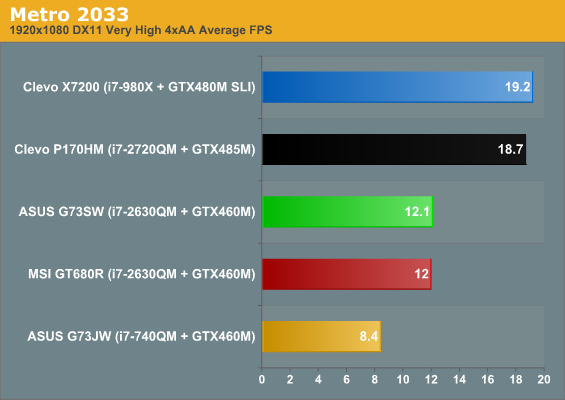 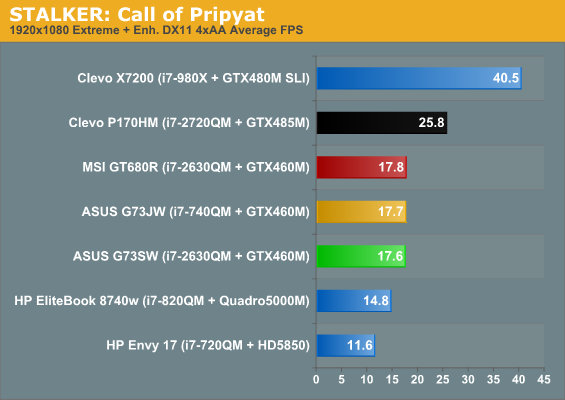 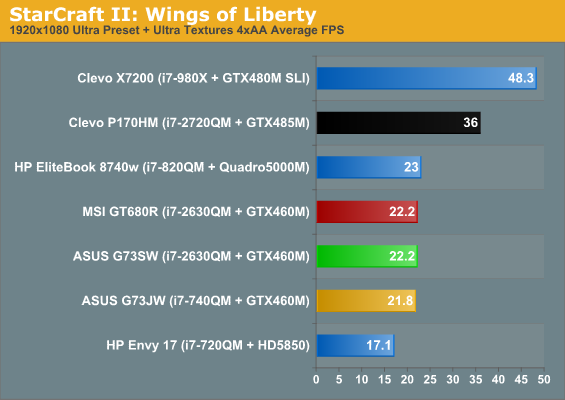 Bumping up to our Ultra settings tends to be too much for most of the single-GPU mobile solutions. DiRT 2, L4D2, and Mass Effect 2 still break 30FPS, but everything else is in the 20s or even teens. One of the major issues with most mobile GPUs is that they simply don’t have the memory bandwidth to handle high detail settings with 4xAA, but then there are titles like Metro 2033 and STALKER where enabling DX11 features and SSAO just kills performance. Even the mighty 485M and 480M SLI fail to break 20FPS in Metro 2033 at our Ultra settings.

Looking at comparisons once more, this time the G73JW and G73SW are nearly tied (-1% to 4% lead for the SW), with the exception of Metro where the SW is 44% “faster”. Of course, 12.1FPS versus 8.4FPS is hardly a meaningful comparison, as neither option is remotely playable. The slight overclock of the GT680R GPU also fails to help here, as the memory bandwidth requirements overshadow the 5% core clock increase, resulting in scores that are all within 1%. Finally, the GTX 485M is able to post comfortable leads across the test suite. The closest the G73SW can get is in STALKER, where the 485M is 47% faster; in the remaining titles the lead is at least 55% and as much as 73%.

When you consider the total cost of a gaming notebook, the extra $500 to upgrade the P170HM to a GTX 485M actually starts to make sense—who'd have thought? But what about the HD 6970M from AMD? If you don’t mind a little spoiler.... <spoiler>I can tell you that out of the eight titles we test, the GTX 485M leads in five games and the 6970M takes the other three; most of the margins are single-digit percentages, but a few break into double-digits. It looks like NVIDIA will maintain their overall lead in mobile GPU performance, but only by a small amount; the question now is how the two GPUs compare in terms of power, heat, pricing, and availability. We’ll get into that more with our review of the Clevo P150HM next week… </spoiler>