We’ll start with our standard set of application results. Here’s where the Sandy Bridge processor upgrade really helps the G73SW distance itself from the previous iteration. What would help even more would be to get an SSD in the system as the OS/app drive; even a 60GB model would be fine, but personally I find 120GB to be the sweet spot. The main comparison here is going to be with the MSI GT680R and the older G73JW, although the Clevo P170HM is also worth a look. As the unit we tested had an SSD, the P170HM is going to really pull ahead in the PCMark tests. 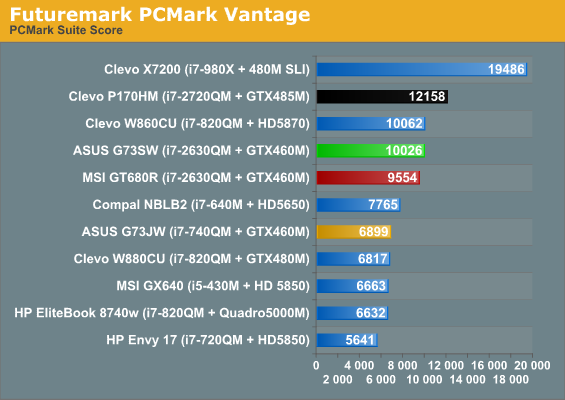 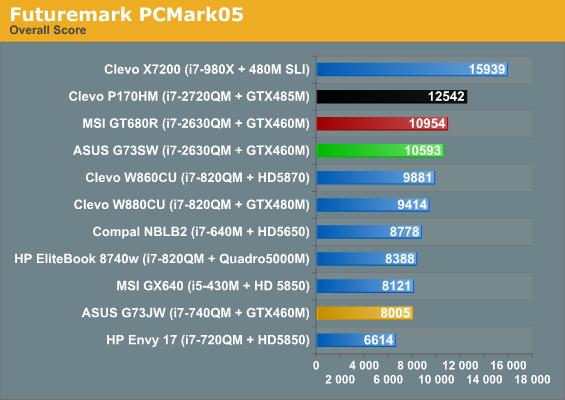 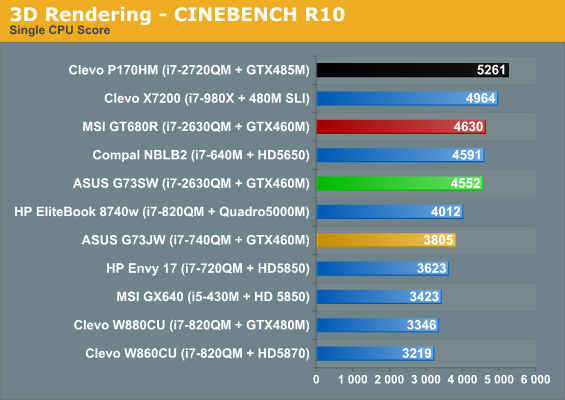 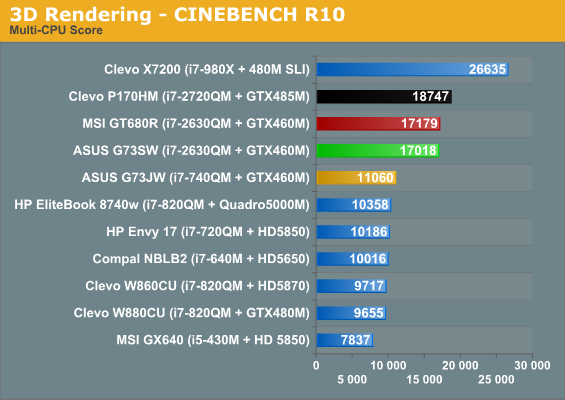 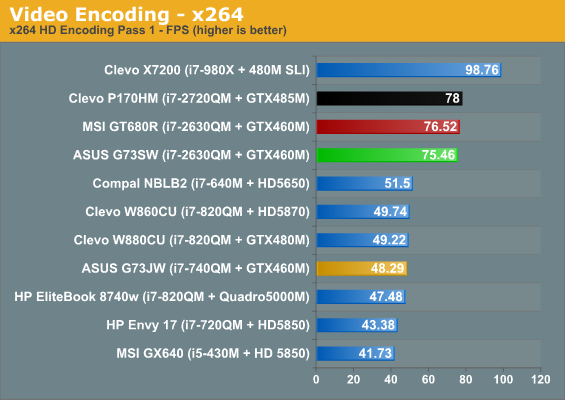 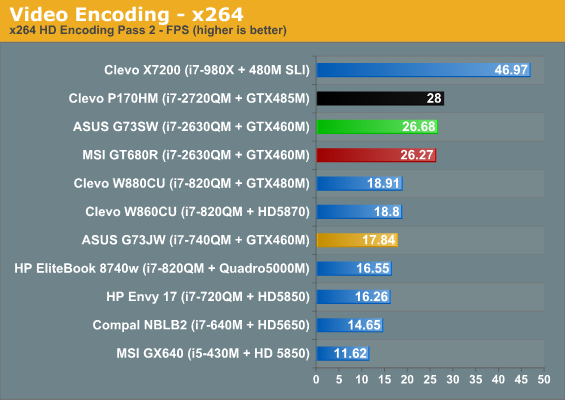 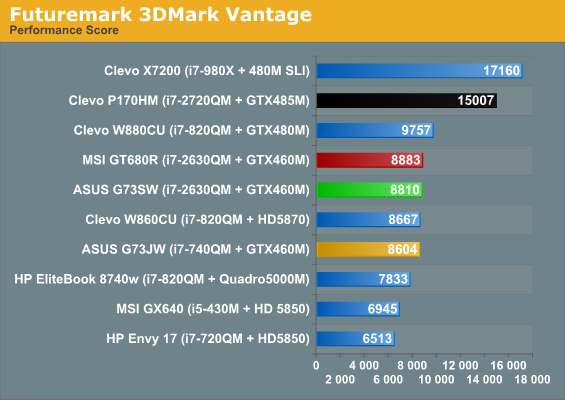 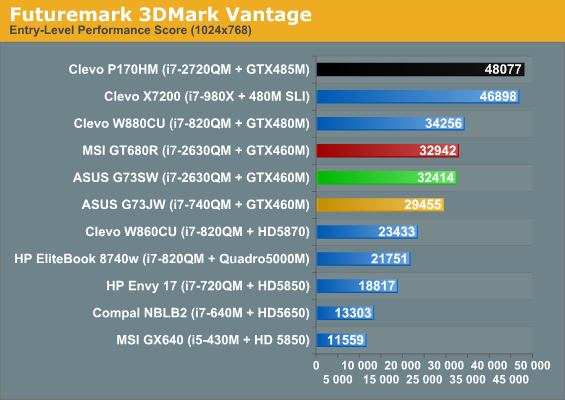 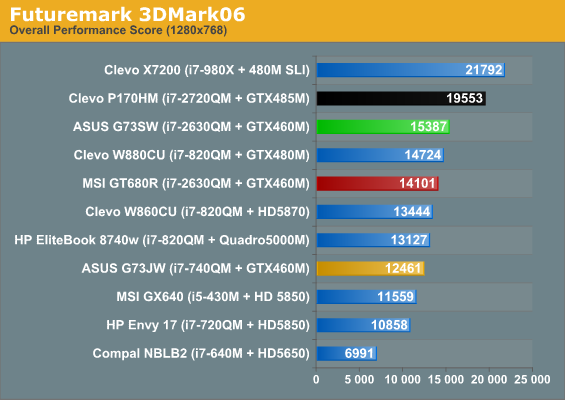 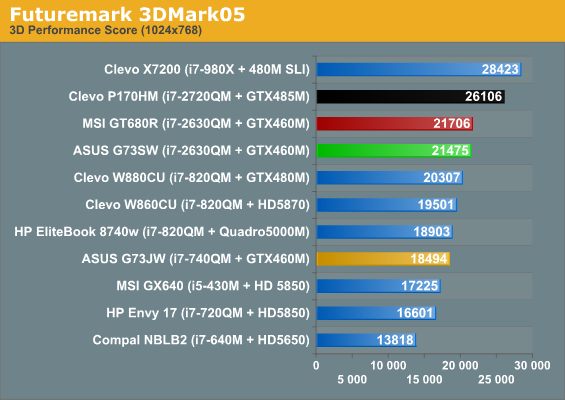 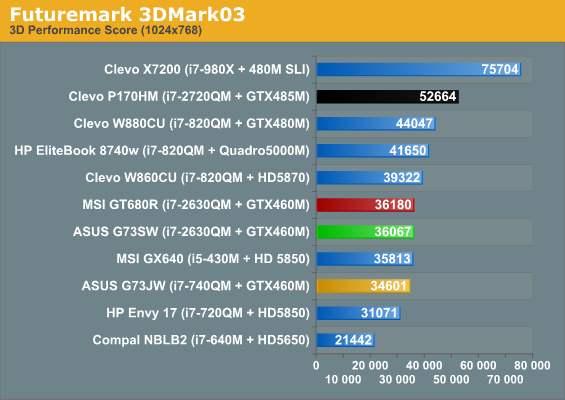 So the first point of interest is just how much faster the G73SW is compared to the G73JW. It leads by 45% in PCMark Vantage (and that’s without an SSD), 32% in the older PCMark05, and anywhere from 20% in the single-threaded Cinebench results to as much as 58% in the multi-threaded tests. In fact, all of the heavily threaded benchmarks are at least 50% faster with Sandy Bridge. Wow. But we already knew that. What about some more recent competition?

MSI’s GT680R has pretty much the same specs, only with RAID0 HDDs instead of individual drives. Oddly enough, the G73SW still came out slightly ahead in PCMark Vantage (by 5%), a test that’s particularly kind to fast storage subsystems (particularly SSDs). PCMark05 puts the GT680R ahead by a similar margin (3.5%), but Vantage is arguably more pertinent in today’s market. Elsewhere, the comparison is largely a wash, with MSI winning three, ASUS winning two, and a tie in the final test. All of the margins of victory are close enough to call it a tie. So, despite having a larger (and ostensibly cooler running) chassis, the G73SW delivers about the same performance as that of the GT680R, which is still very good.

The other point of comparison is the recent Clevo P170HM, which has a faster i7-2720QM CPU and a much faster GTX 485M GPU. The latter mostly won’t matter here (except for PCMark05), but the 2720QM does carry a small clock speed advantage, and the Crucial C300 SSD will definitely help in PCMark Vantage—good for a 21% lead, in fact. it has an 18% lead in PCMark05, with help from both the SSD and GPU. The remaining tests are purely CPU limited, and the lead ranges from 3-5% in x264 encoding to as much as 15% in the single-threaded Cinebench result where the more aggressive Turbo Boost on the 2720QM comes into play.

Recall that the 2720QM can Turbo to 3.3GHz from the stock 2.2GHz for single-threaded work, and still hit as high as 3.0GHz with all four cores active; in contrast, the 2630QM maxes out at 2.9GHz single-threaded, or 2.6GHz for all four cores. It looks as though x264 encoding isn’t able to Turbo as high as Cinebench for some reason, as even the heavily CPU bottlenecked second pass is still only 5% faster with the 2720QM, despite a potential 10% to 15% clock speed advantage—or maybe it’s that the G73SW is able to run at the maximum 2.6GHz, whereas the P170HM might have to drop down to 2.7-2.8GHz due to temperature.

Any way you slice it, the quad-core Sandy Bridge processors are very fast for general computing work. It’s just a shame that the use of the PM67 chipset and discrete GPU means there’s no way to access the CPU’s QuickSync feature. That’s one more reason switchable graphics really makes sense in notebooks, but it does add some complexity that some of the OEMs prefer to avoid. So far, no one has been willing to try NVIDIA’s Optimus Technology with any mobile GPU faster than the GT 435M, although we hear there’s a GT 555M Optimus notebook coming some time in 1H’11.