The G73 is a 17.3” notebook chassis with a 75Wh battery; we know what that means, right? You’re not going to get all-day computing, or even half a day (unless you have a six-hour workday). We also know that Sandy Bridge is more power efficient than Clarksfield, so we should see some gains relative to the G73JW. And that’s exactly what we get. 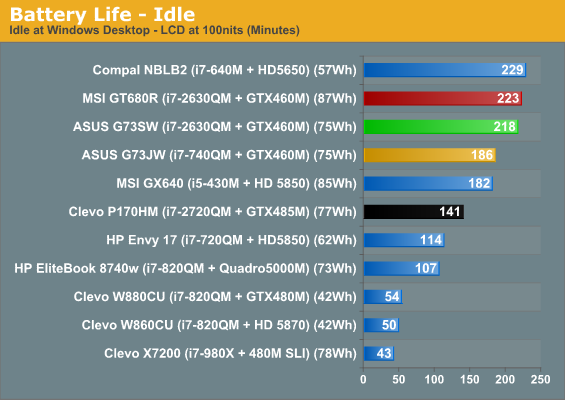 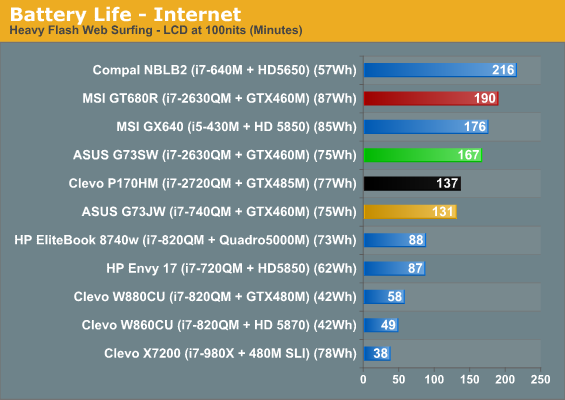 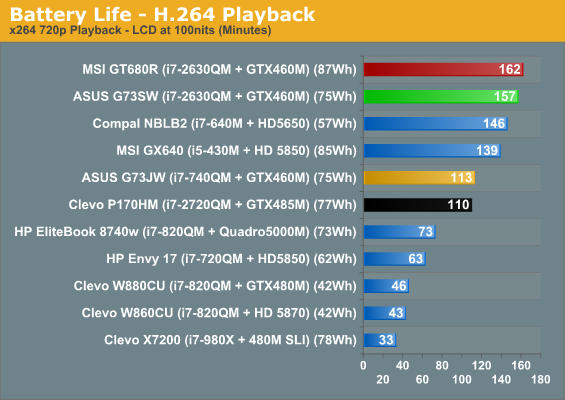 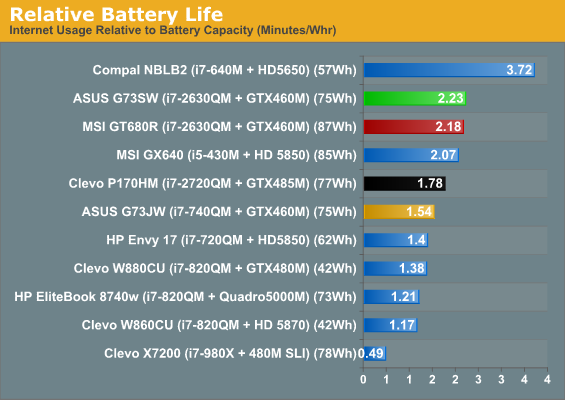 Idle battery life is up 17% to 3.75 hours, and that’s the smallest increase. Internet battery life is up 27%, though it falls just shy of the three-hour mark, and H.264 decoding is up 39% to over 2.5 hours. While those are all fairly impressive increases over the previous generation, let’s not lose sight of what we could get with switchable graphics. A vanilla i7-2820QM notebook running off the HD 3000 IGP manages roughly double the runtime in our battery life testing, and that’s with a slightly smaller battery.

We can actually estimate the idle power requirements of the GTX 460M based off of those results, and let me tell ya, it ain’t pretty. Based on the 71Wh battery and the various test results, the Compal SNB notebook we tested used an average of 9.04W at idle, 10.24W in the Internet test, and 16.38W in H.264 playback. In comparison, the G73SW averages 20.64W idle, 26.95W Internet, and 28.66W in H.264 decoding. That means the GTX 460M requires roughly 10W at idle with very low clocks (50MHz core, 270MHz RAM), around 15W with a web browser showing Flash advertisements, and the difference between HD 3000 and GTX 460M in H.264 encoding is back to ~10W. Sadly, these high-power GPUs just aren’t very friendly to battery life, with just the GPU using about as much power as the rest of the notebook combined. Here’s where NVIDIA’s Optimus Technology would have been useful: twice the battery life, the ability to use Intel’s QuickSync technology, and discrete graphics performance when you want it.

Plugged in power numbrs are all higher, as the GPU isn't in "limp mode" and we also ran the LCD at maximum brightness. At idle, we measured 27W at the outlet using a Kill-A-Watt device; taking into account power adapter inefficiency, that figure matches up pretty well with our above calculation. When we put a 100% load on just the CPU (using Cinebench 11.5 SMP), power draw gets as high as 87W. Running through the various 3DMark tests, we saw a maximum "typical gaming" load of 114W, whereas Furmark manages to push the GPU just a little harder and we measured up to 125W. It's also interesting to note that we couldn't get power draw any higher by running Furmark with a CPU loading utility; the CPU load was apparently enough to reduce Furmark performance and so our "worst-case" CPU+GPU load actually dropped to 118W. Again, factoring in power adapter inefficiencies, there's still plenty of headroom on the 150W power brick (unlike the 300W brick in the Clevo X7200 with SLI systems), so you can even play games while charging the battery.

We've had some reader requests for a few other battery life metrics. Charging time on the G73SW (with the system powered up) checked in at 168 minutes; it might recharge slightly faster if the system is off, but with a 150W power brick there should be plenty of extra juice for the charging circuit. If you want to run the LCD at maximum brightness rather than 100 nits (or cd/m2 if you prefer), idle battery life drops to 195 minutes. So the extra 55 nits of brightness requires an additional ~2.5W of power. We also ran our Internet test with Pandora open and streaming music in a separate browser tab; that dropped battery life down to 140 minutes. Finally, what about gaming on battery? With the GPU set for maximum performance, we managed 67 minutes looping 3DMark06, but there’s still a catch.

Even trying our best to achieve maximum gaming performance while on battery power, the GPU is still throttled—and the CPU appears somewhat slower as well. We ran the full Futuremark test suite on battery power, using the High Performance power profile. The following chart shows the percent of performance relative to the same test running off the mains (so a score of 100 would be no change in performance). 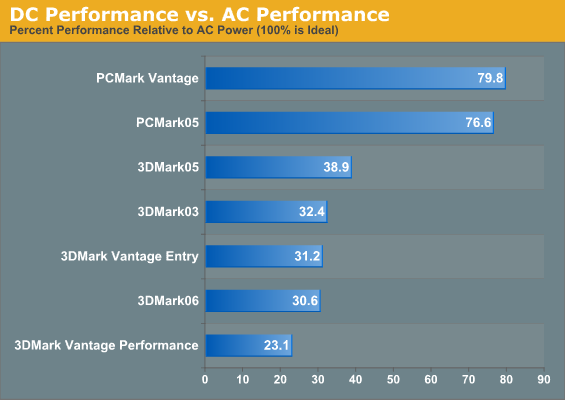 The best results are in PCMark, where battery performance is still 80% of plugged-in performance. Move over to graphics tests, and 3DMark05 managed to maintain nearly 40% of AC performance, 03/05/Vantage Entry are in the range of 30-32% of AC performance, and the Vantage Performance preset is less than one fourth as fast. To put that in perspective, you’re looking at gaming performance that’s actually worse than what you’d get with a midrange GT 425M GPU.

The problem appears to be getting sufficient power to the GPU from the battery for the higher clocks, as the midrange GPUs don’t forcibly throttle performance on battery power (at least in my experience). Then again, it’s not like you get significantly better battery life for gaming on a midrange GPU—I measured 104 minutes with a GT 425M on an 84Wh battery with an i3-380M CPU and a 14” chassis. In other words, while it’s possible to have a gaming laptop that gets good battery life (i.e. by shutting off the GPU), unless something changes in a big way we’re not going to get great gaming performance while on battery power. So fire up your smartphone and play some Angry Birds instead :)