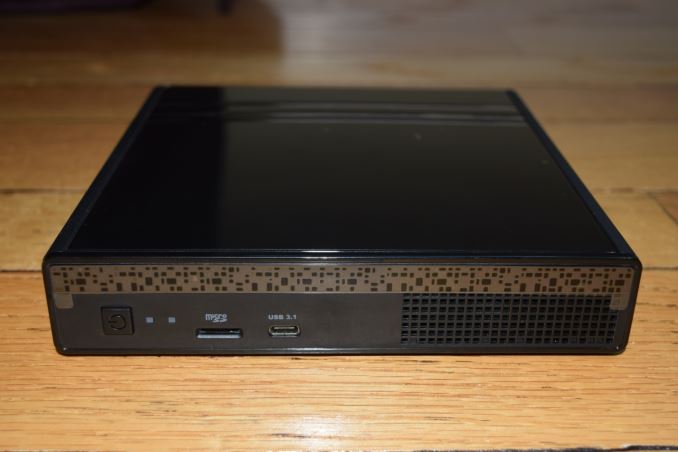 The desktop PC market has been subject to many challenges over the last few years. However, the miniaturization trend (including the introduction of the ultra-compact form factor - UCFF - NUCs) has provided some bright spots. The recent introduction of the mSTX (5x5) form factor has provided yet another option between the NUC and the mITX form factor for PC builders. Companies like ASRock and Zotac have been marketing mini-PCs based on mSTX-like custom boards for a few years now. ECS joined the fray in early 2016 with the launch of the LIVA One based on a Skylake platform.

The LIVA One is the latest member of ECS's mini-PC lineup that started with the LIVA, a Bay Trail-M system, in mid-2014. Since that time, ECS has introduced the LIVA X, LIVA x2 and the LIVA Core - each of them packing in more performance compared to the previous generation. One common feature that tied all these units together was the fanless nature. However, with the LIVA One, ECS has decided to increase the size of the unit and also utilize active cooling for the CPU. The soldered CPUs of the older LIVA units has been replaced by a LGA processor - enabling end-users / buyers of barebones units to use their own CPUs (as long as they are Skylake ones having a TDP of 35W or lower).

The LIVA One is based on the H110 Sunrise Point chipset. The pre-built configuration comes with an Intel Core i3-6100T. Dimensions of 173mm x 176mm x 33mm make it ECS's biggest LIVA yet. Subjectively speaking, the unit feels quite solid in hand, thanks to the metal exterior (only the top panel is plastic). The industrial design is also quite pleasing. The unit can be oriented either vertically or horizontally, with perforations set up to aid proper airflow in either orientation. 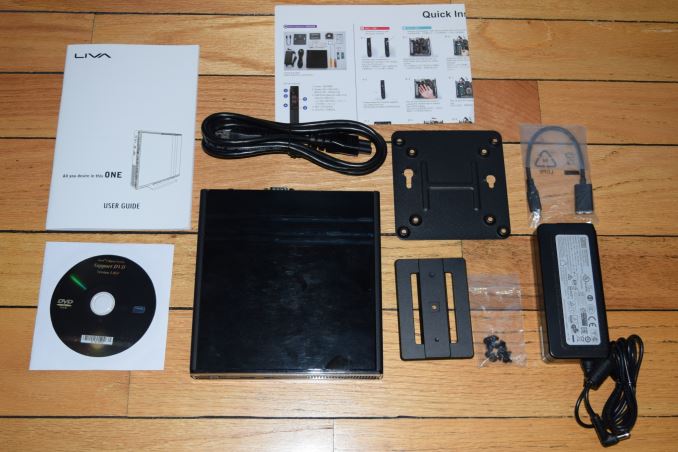 In addition to the main unit picture at the top of the page, the LIVA One package contains a 90W (19V @ 4.74A) power adapter, a Type-C (Male) to Type-A (Female) USB 3.1 cable (for use with the USB 3.1 Type-C port in the front panel), a VESA mount as well as a vertical orientation mount (along with the necessary screws), a quick installation guide (particularly useful with barebones configurations), a user guide and a support DVD with the necessary drivers.

The gallery below takes us around the package / chassis and its various features. Important aspects to note regarding the internal configuration include support for up to two DDR3L SO-DIMMs (the preconfigured unit comes with only one slot populated, allowing end users to upgrade the RAM, but, in the meanwhile, sacrificing some out-of-the-box performance) and support for both 2.5" and M.2 drives (both are SATA based). On the front side, we have a microSD slot along with a USB 3.1 Type-C port (enabled by the ASMedia ASM1142 USB 3.1 xHCI Controller, which takes up two PCIe lanes on the PCH). The rear panel is filled with different ports targeting a variety of use-cases - we even have a COM port for industrial applications.Other than that, we have the standard full-sized Display Port 1.2, VGA and HDMI 1.4a video outputs. A micrphone / headphone connector, a GbE RJ-45 port, a Kensington lock slot and four USB 3.0 ports round out the I/O connections on the rear side. One of the four USB 3.0 slots can support current delivery of up to 2.6A, enabling the connection of ECS's custom SF-Plus 'HD-Drive bay' that can be used to add either an optical drive or another 2.5" drive.

The specifications of our ECS LIVA One review configuration are summarized in the table below. The specifications indicate suitability as a powerful mini-PC for home users. It also targets industrial and business use-cases (i.e, small firms that don't need vPro support).

The ECS LIVA One kit doesn't come with any pre-installed OS, but does come with a DVD containing the drivers. In any case, we ended up installing the latest drivers downloaded off ECS's product support page. While Windows 10 (10586) comes with the drivers for the WLAN adapter, Windows 8.1 needs the driver to be installed manually. The UEFI BIOS is also quite functional (though, as expected, we don't have too much control over the clocking aspects). The gallery below takes us around the various options available in the BIOS. All the benchmarking was performed with the 'optimized defaults' setting.

In the table below, we have an overview of the various systems that we are comparing the ECS LIVA One against. Note that they may not belong to the same market segment. The relevant configuration details of the machines are provided so that readers have an understanding of why some benchmark numbers are skewed for or against the ECS LIVA One when we come to those sections.