NVIDIA sends word this morning that they are initiating a recall on the SHIELD Tablet. Being announced today and taking effect immediately, the tablets are being voluntarily recalled by NVIDIA on account of safety concerns with some of the batteries the company has used. Though NVIDIA’s announcement doesn’t go into significant detail on the matter, NVIDIA’s notice does specify that some tablets have been shipping with batteries have the potential to overheat, making them a potential fire hazard.

NVIDIA’s recall covers SHIELD Tablets manufactured between July 2014 and July 2015, essentially covering the entire lifetime of the tablet so far. Furthermore the company is asking that current owners do not use the tablets any more than is necessary to back them up and participate in the recall due to the aforementioned risk of fire.

As for the recall process itself, the company notes that only some batteries are defective. As a result the recall process for the Tablet is a bit more involved than a blanket recall, as tablets containing defective tablets need to be identified. To do this, NVIDIA has pushed out a new SHIELD software update, SHIELD Tablet software 3.1 (their release of Android 5.1.1) which includes additional battery information in the Tablet’s About screen. Defective batteries are labeled Y01, while the alternative B01 batteries are unaffected. 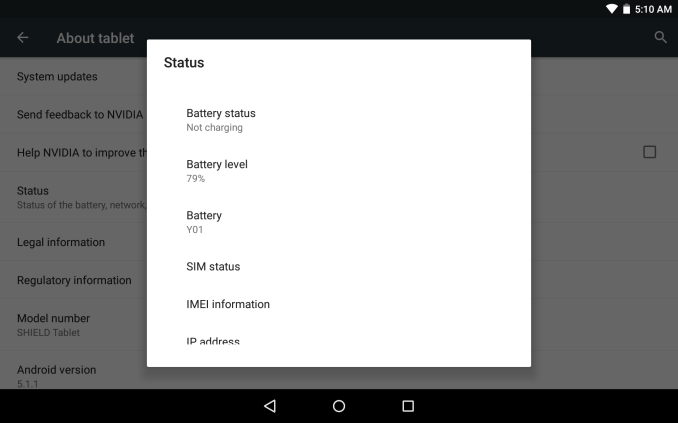 The Consumer Product Safety Commission report for the recall has been posted, which offers a bit more insight into the problems and the numbers involved.

NVIDIA has sold 83,000 faulty SHIELD Tablets in the US, along with another 5,000 in Canada. Of those, NVIDIA has received 4 reports of overheating, with 2 of those reports indicating that the overheating tablet had caused property damage (specifically, to flooring).