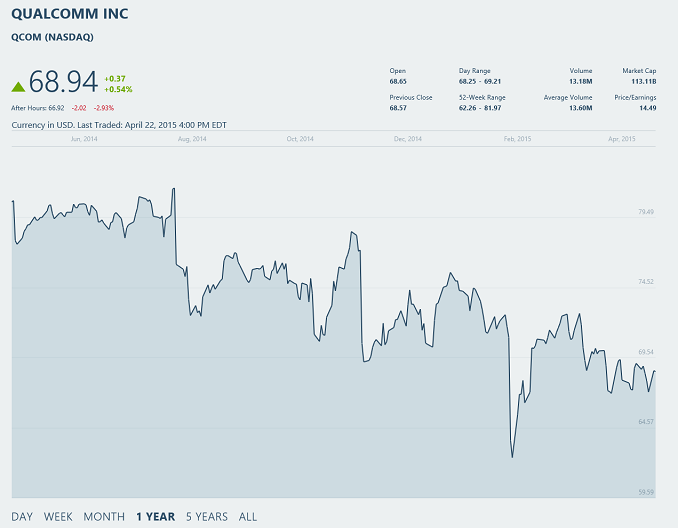 The reason for the large hit to operating income, net income, and EPS is due to Qualcomm having to pay out $975 million to the China National Development and Reform Commission or NDRC. This charge is the resolution that was enacted due to Qualcomm falling afoul of China’s Anti-Monopoly Law, and as such it is a one-time fee. As such, Qualcomm has also released Non-GAAP results which exclude this one time hit to get a better look at how the business is operating. On a Non-GAAP basis, operating income was up 16% year-over-year to $2.7 billion, which is also a 7% gain over last quarter. Net income was up 4% at $2.3 billion, and EPS came in at $1.40 for Q2, as compared to $1.31 last year and $1.34 last quarter.

Qualcomm actually had negative cash flow for the quarter. The already mentioned fine paid to China accounted for some of it, and Qualcomm also performed a prepayment of $950 million to secure long-term capacity from one of their suppliers. Those two hits resulted in a $0.7 billion shortfall in cash flow. Last year, they had $1.8 billion in positive cash flow, and last quarter it was $2.4 billion.

Qualcomm repurchased 27.8 million shares in Q2, plus paid out $0.42 per share, returning $2.6 billion to shareholders of the company. On March 9th, they announced a new $15 billion stock repurchasing program which includes $10 billion in shares to be bought back in the next twelve months. Additionally, they will be paying out $0.48 per share on June 24th to any shareholder of record as of June 3rd, which is 14% more than last quarter’s payout.

However not everything to come out of the results was good news. Qualcomm has lowered their outlook for the semiconductor business for the second half of FY 2015. Greater competition has reduced Qualcomm’s market share in the SoC space, especially within flagship phones. The two largest phone makers, Samsung and Apple, both use their own designs in their flagship products. This will change Qualcomm’s product mix more heavily towards modem chipsets. There has also been some uncertainly created due to the existing licensing agreements Qualcomm has in place in China due to the resolution with the NDRC. With the case now concluded, the company is hopeful that these arrangements can be sorted out, as they believe that not all devices sold in calendar year 2014 were reported to them.