Exactly how a portable computer can act as a notebook, an LCD desktop, and a tablet PC all in one probably needs a bit of explanation. So forget about what you know about notebooks and get ready to see portable systems the PaceBlade way.

The display and system of the PaceBook are integrated into one component which many may recognize as a tablet style PC. In its tablet form, the PaceBook operates very similar to how any other tablet PC operates. The system's 12.1" XGA LCD display is actually touch sensitive so user input can be provided by the stylus that finds its home in the upper left of the unit.

Because the PaceBook is actually a fully functional x86 machine, in it's tablet form the unit includes all the ports and accessories necessary for operation. Let's get more familiar with the system by taking a look around the tablet.

By default the system runs in landscape mode with a 1024x768 resolution. As mentioned earlier, the XGA screen is touch sensitive. Because of this, the units screen incorporates 2mm of glass above the LCD, creating a durable surface for writing and also giving the LCD a layer of protection. The screen's writing surface is very similar to the touch screens used on touch sensitive PDAs such as PocketPC and Palm systems. The distance between the screen's plastic surface and the touch sensitive layer was very small and required very little effort or pressure to make contact with the touch screen.

Located above and below the screen are two speakers. In landscape mode, the bottom speaker acts as the left speaker and the top as the right when outputting stereo sound.

To the left of the LCD screen are 3 buttons, two LEDs, and a built-in microphone. The microphone is located on the bottom left side of the unit, fairly close to the user's mouth when used on a lap or in the hands. The microphone consists of two holes: one for the microphone itself and another, smaller hole, that helps to cancel out ambient noise in the area.

Above these set of holes is the portrait/landscape button. This button allows the system to be switched from the default landscape configuration into a portrait (768x1024) using the included Pivot software. Hitting this button in Windows rotates the screen 90 degrees clockwise, putting the buttons on the top of the display and the IR port on the bottom. Because switching of the display is done in software, the button only works when in Windows with the proper drivers installed.

The power button lies in the middle of the left side of the system. Above the power button are two LEDs. The LED on the closest to the system's bottom indicates battery charge: it glows orange when the battery is charging, flashes when trickle charging, and glows solid green when on and charged. The upper LED is a power and hard drive activity light. The LED grows solid green when on and flashes during hard drive activity.

The final button on the front left of the PaceBook is the menu button. Like the portrait/landscape button, the menu button works only within Windows with the proper software installed. The button is mapped to run PaceBlade's own "menu" utility. Basically, the menu program provides quick access to the PaceBook's settings and programs, but more on this in the Software section. These LEDs and buttons relocate to the top of the system when used in portrait mode.

The other item on the PaceBook's front is the IR port, located on the right of the system when in landscape mode or the bottom of the system when in portrait mode. Besides that, the only other items visible from the PaceBook's top are the two speaker ports. Remember how the bottom speaker acted as the left speaker and the top one acted as the right speaker? Well, rotating the display ninety degrees places the speakers in their proper left/right orientation. 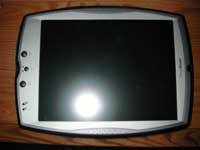