Because of when the MSI 970 Gaming was released, and the amount of versatility of the MSI BIOS ecosystem, the motherboard gets an almost fully updated BIOS package to play with. There are a couple of features that we see on the latest Intel platforms which are missing here, which is a little unfortunate for overclockers especially. That being said on the AMD 970 platform overclocking is possible but is not the main focus - MSI still adds the options in anyway. 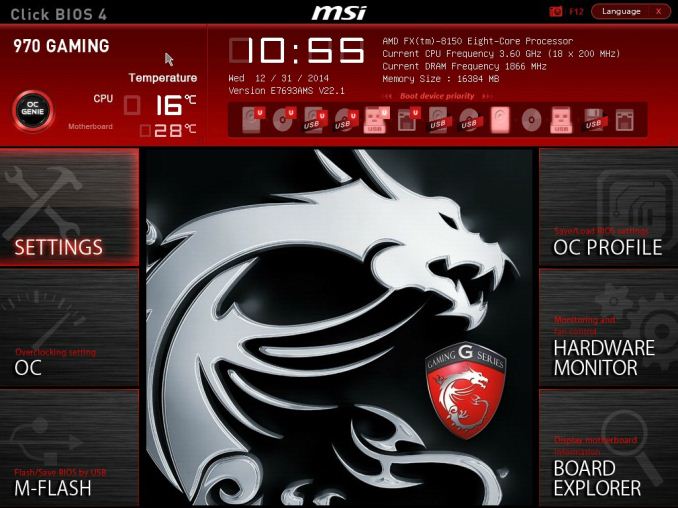 Those that are familiar with the MSI package in general will recognize this main screen setup, featuring the dragon Gaming Series logo on the front and the top banner containing a number of useful bits of information. On the positive side we get the name of the motherboard, the BIOS version, the CPU installed, the CPU frequency at POST, the DRAM size and frequency as well as the CPU temperature and an OC Genie option. Unfortunately MSI has not added its XMP button in the top left hand corner alongside OC Genie, perhaps because XMP is an Intel named process and AMD’s equivalent, which is essentially the same thing, is somewhat ambiguous in its naming (others call it AMD Memory Profile, for example). Also worthy of note is that the CPU voltage is not listed, which might be useful for overclockers, and neither is the CPU fan speed, in case the CPU fan is not plugged in properly.

On the sides of the main image are the main BIOS tabs which enter the other sections of the BIOS. The options for each section are placed in the middle of the screen, which squeezes them into a relatively small space. 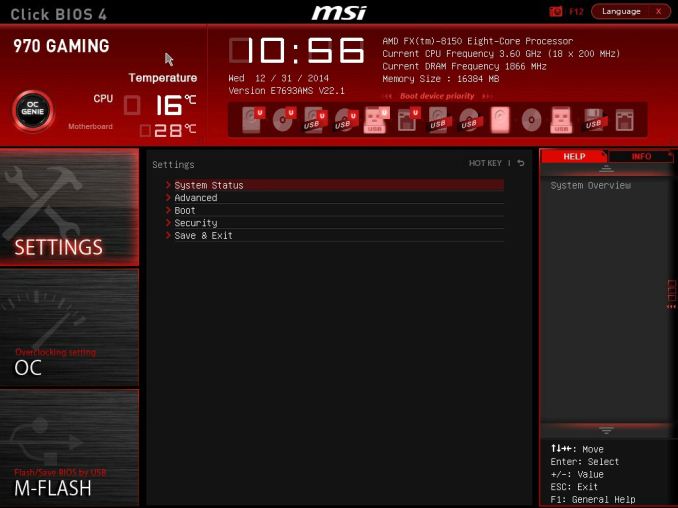 For example, the Settings tab gives the above options, with the help screen explaining each option on the right. The info tab next to the help screen will list some of the system voltages, although this information should be easier to source. 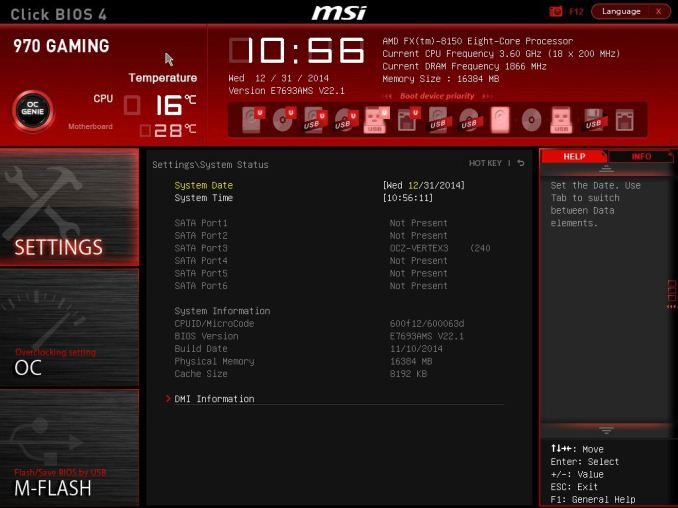 The System Status menu option is more akin to a normal entry point for a BIOS, showing more of the same information at the top of the screen along with a list of drives installed in the SATA ports. For the future, MSI might think about adding in a per-DIMM list to show which memory slots are occupied as well. 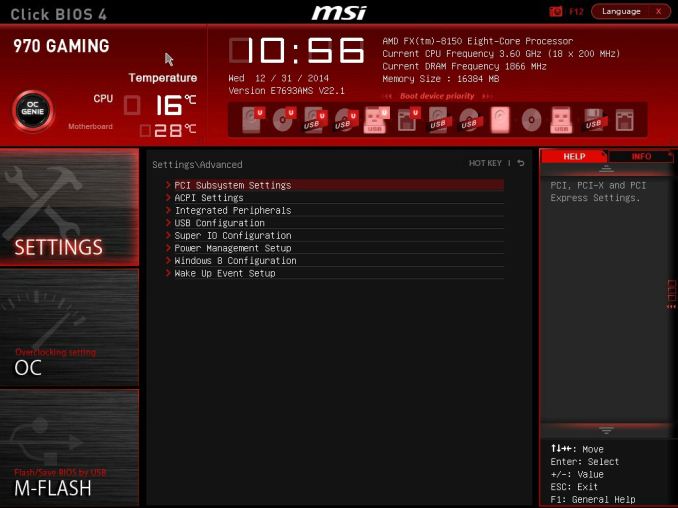 The Advanced menu option from the Settings tab gives more of a wider range of BIOS options, such as the Integrated peripherals option which allows users to switch SATA modes between RAID, AHCI and IDE or to disable controllers: 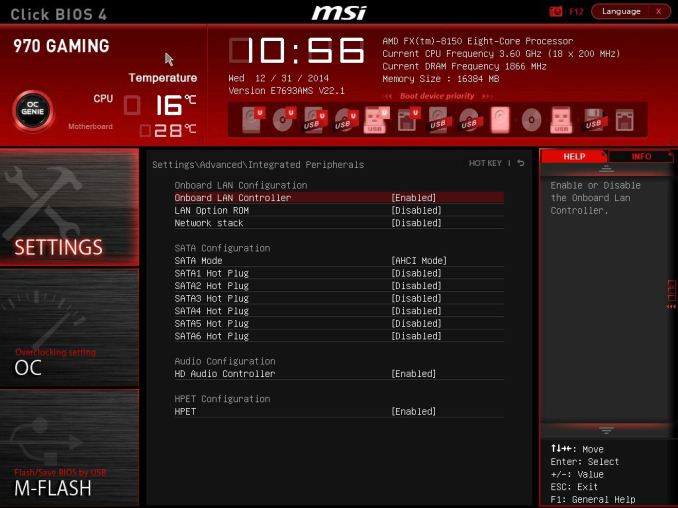 From the Advanced menu there are also the Fast Boot options, useful for users with compatible graphics solutions and Windows 8 to increase the POST loading times. 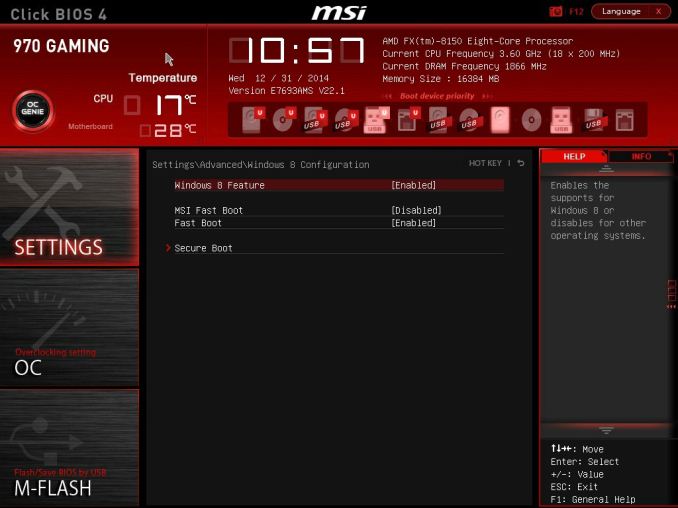 Back out in the Settings tab we also have the Boot options for boot order: 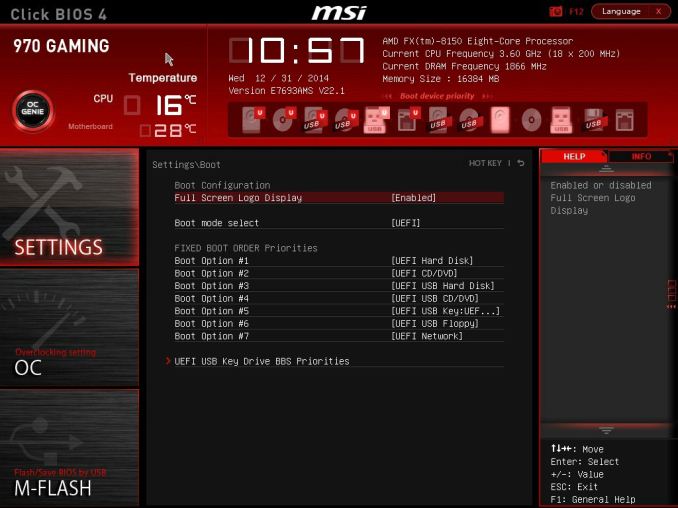 As well as Save and Exit for a simple one-time boot override: 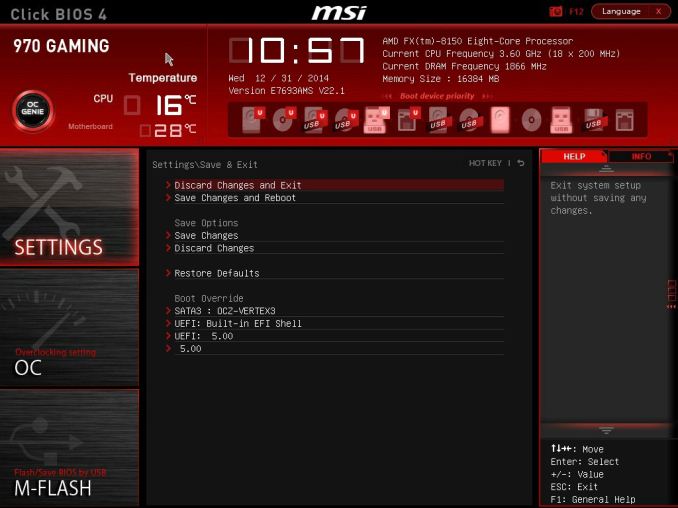 The OC tab from the main screen is where all the cool kids overclockers hang out, but unlike the latest implementations from MSI, the 970 Gaming goes back to the long list of overclocking options with no discernable order. 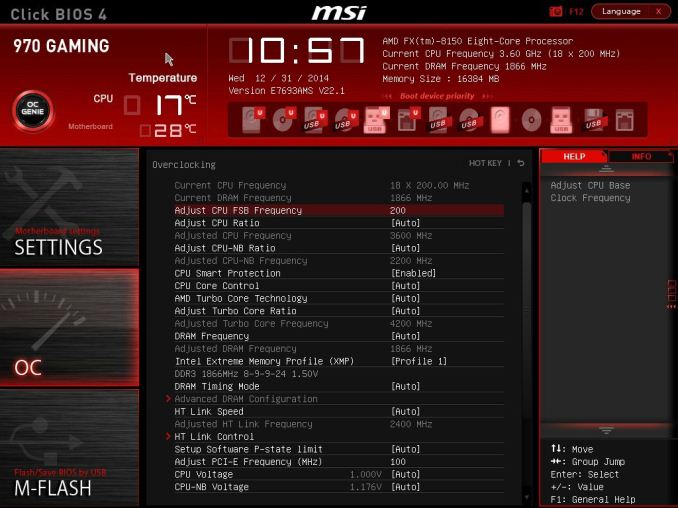 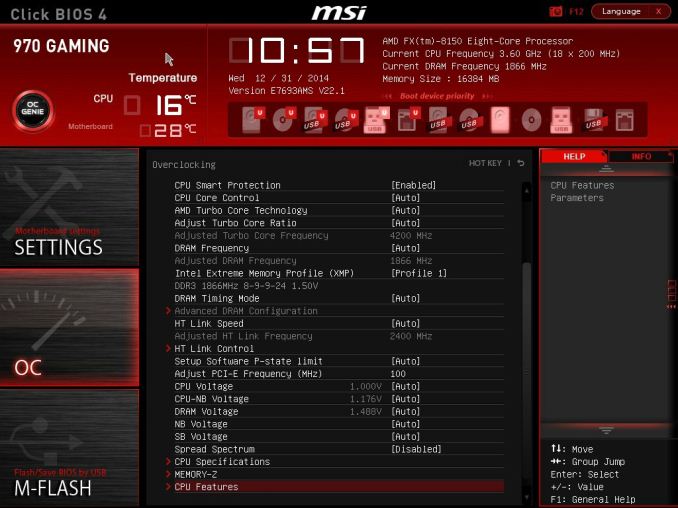 What order we do have starts with frequencies, then turbo modes, DRAM frequencies, sub-DRAM timings, HyperTransport speeds, voltages and then a couple of extra features. In the newer BIOS iterations these are aligned, which would have worked well here.

A couple of items are worthy of note. Firstly, the XMP listing has ‘Intel Extreme Memory Profile’ as a menu option, which might seem a little odd on an AMD-based motherboard. Secondly, and perhaps more important, is the CPU voltage option. With this motherboard we are unable to set a fixed voltage,and instead have to rely on an offset. This varies from -0.350 volts to +0.500 volts and up, with the graduation between voltages changing between 0.001 volts through 0.01 volts depending on what range you are dealing with.

There are two points of confusion that go on here. Firstly is that without knowing the stock voltage of the CPU, it will be difficult to guess the voltage needed when starting to overclock. Secondly, the system actually reduces the voltage when at stock settings without telling you. So above it shows that our CPU voltage is 1.000 volts, but when I place a +0.200 volt offset, it moves up to 1.525 volts in the operating system. This is because the stock voltage for this FX-8150 CPU is actually 1.325 volts, but for some reason it says 1.000 volts at stock. Again, it can be very confusing. When I made the offset to +0.01 volts, it came down to 1.335 volts in the operating system, showing that is does work in part. Moral of the story is to try with small voltages first – do not rush in.

To add all this into the mix, there is no load line calibration option here either, meaning that any voltage drop across the CPU under load is going to happen and the system does not allow for the user to correct for it, potentially ending up with higher voltages for a similar overclock than other motherboards. 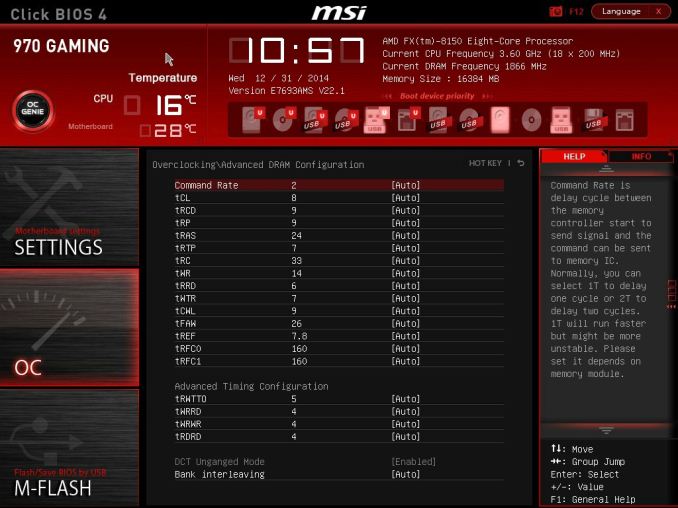 Adjusting the DRAM options is a little difficult as well, given that for whatever speed is chosen, there is no real indication of where the memory should sit or what the suggested values should be for a given XMP profile. ASRock’s implementation showing all the JEDEC and XMP subtimings is a better version here. 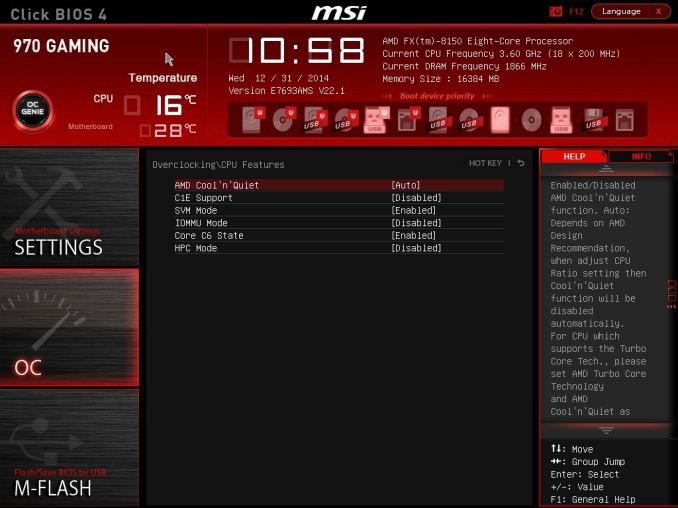 In the CPU Features section we get the usual array of C-state and turbo options. 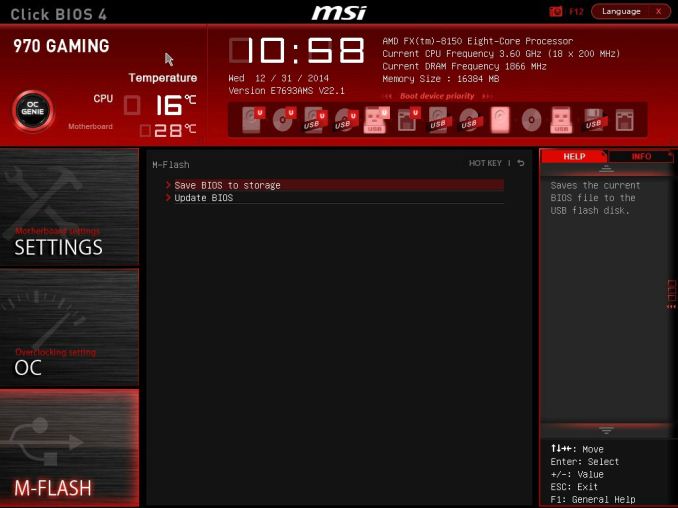 M-Flash allows for the system to have the BIOS updated. M-Flash may have to let the system restart a couple of times in order to complete the process. 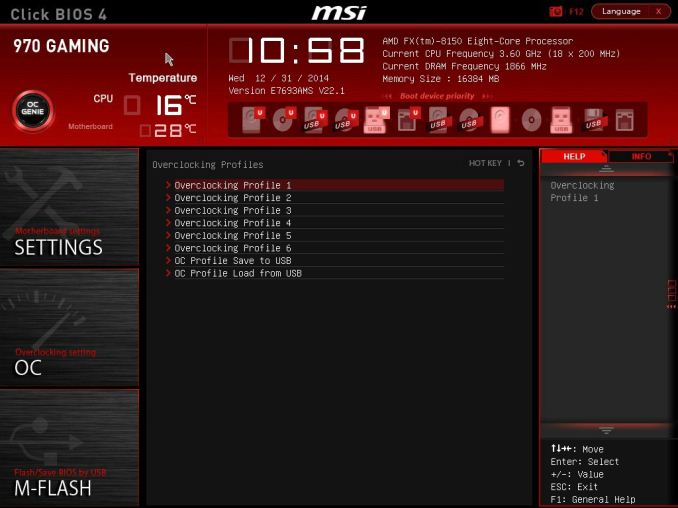 The 970 Gaming also supports overclocking profiles, allowing users to keep settings for various processors. The 970 Gaming is not necessarily aimed at extreme overclockers, especially due to the voltage options, but these are here in case they are needed. 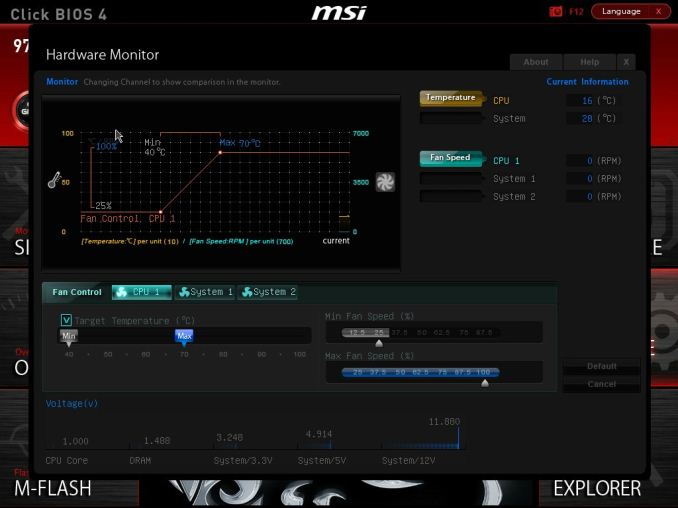 The AMD series does not get MSI’s updated version of its fan control software, but at least the Hardware Monitor tab gives a graphical representation with interactive sliders to allow the user to adjust the two-stage fan gradient as appropriate. 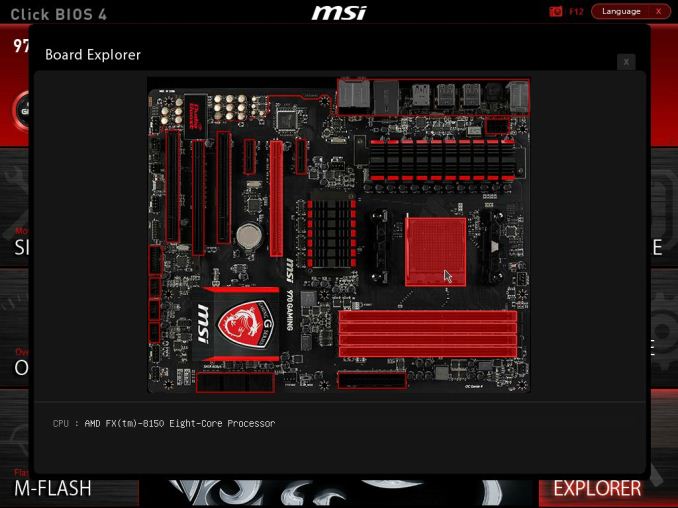 Board Explorer shows what is installed on the motherboard, and thus useful for diagnosing which memory stick might not be seated correctly or if a GPU is not accessing the right number of PCIe lanes.

Since our last review of an MSI AMD motherboard, the software ecosystem has changed a lot. User experience is one of the key features now, which means improved visuals and a higher standard of interaction between the user and software – fiddling with knobs and inputting data does not cut it anymore. MSI’s software for the 970 Gaming gets the latest updating tweaks, for better and worse. 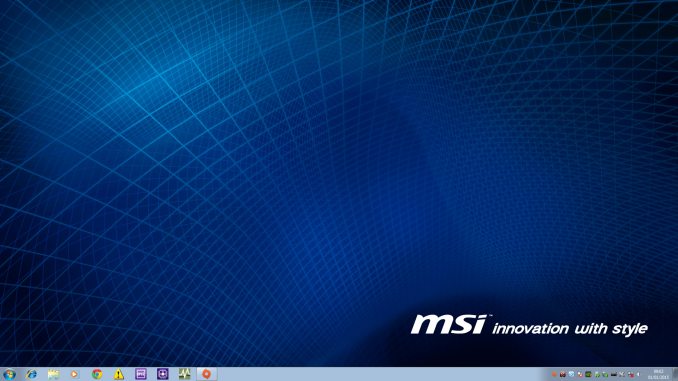 Up first is the bundled backgrounds, of which above is one of them which is then followed by a gaming motif which act on a rotation when installed. Perhaps it is a little quirky and insignificant, but it shows that the motherboard manufacturer wants the user to align their experience of the system with the brand, potentially creating a level of confirmation bias for future purchases.

MSI’s software package comes with a number of interesting apps, as well as the big Command Center one. For the small packages, we get Easy Viewer: 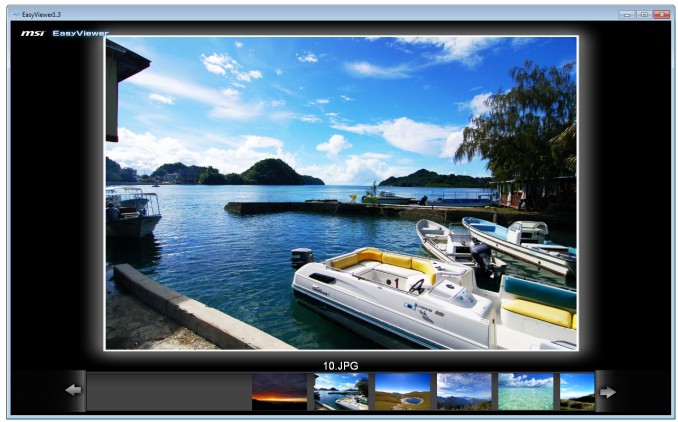 This is meant to be an improved version of Windows basic image preview, although I personally use FastStone Image Viewer (one of our benchmarks) which runs faster, is free, and has a lot more options. EasyViewer identifies a core criticism of the Windows base preview, because it is lacking in functionality, but EasyViewer is not necessarily the best answer. 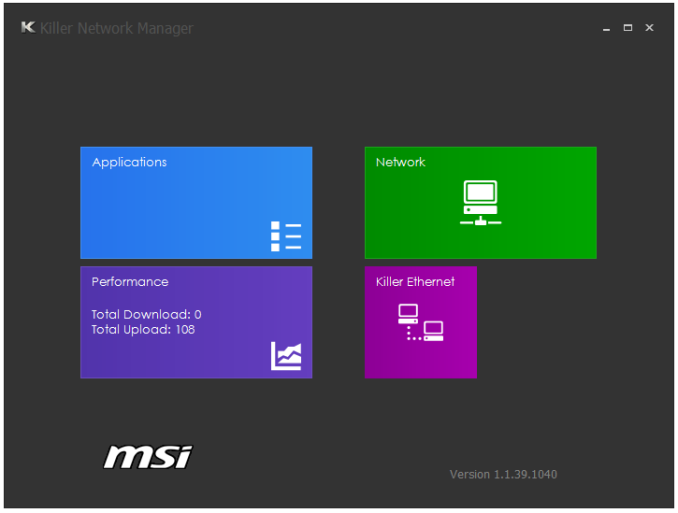 The Killer networking software is part of the package sold with the network controller, and it means that MSI can bundle in the software to actually do the network prioritization part. I now have new contacts with the Killer networking team and hope to provide a few pointers to update this software because the other implantation we see on motherboards, cFos, is a lot better to use. Ideally we want to see presets here for gaming/VOIP, or an interface which is not a pain to use. 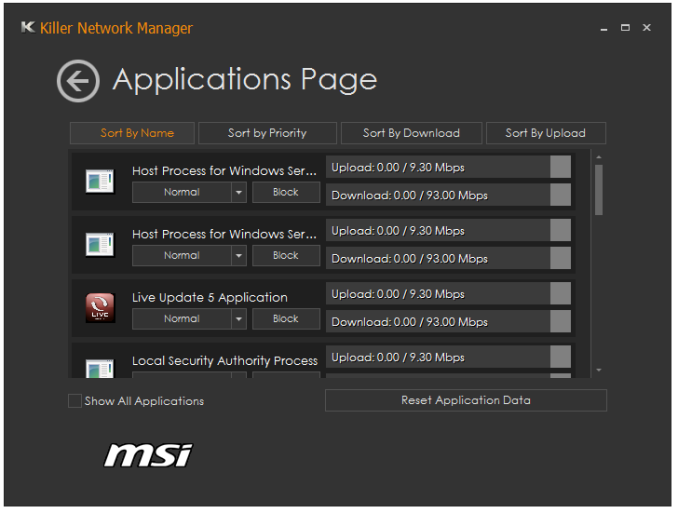 For example, the application page lists all the applications is a very verbose manner, making the process feel clunky and not worth doing – especially if you have a couple of hundred games to sort through. ASUS provides pre-determined lists for this in their ROG software, and it makes sense that Killer should go down that route if they want to improve the experience. 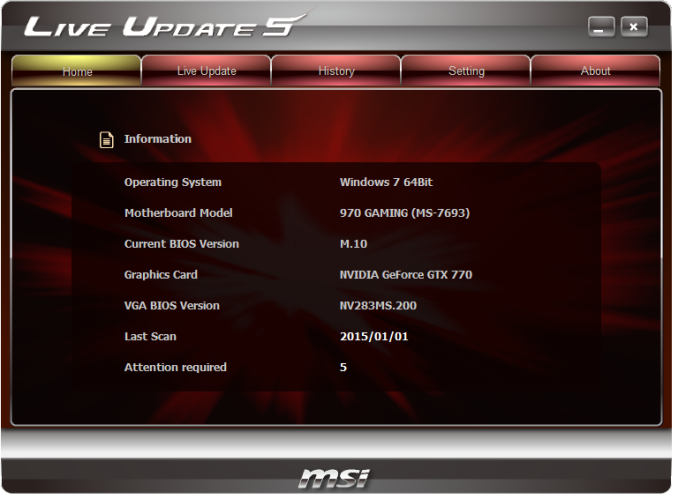 Live Update is one of the most positive aspects of MSI’s software package, providing a level of unparalleled feeling towards driver and software updates that the other manufacturers have yet to match. The software searches the MSI servers for the latest updates and offers the download and install options: 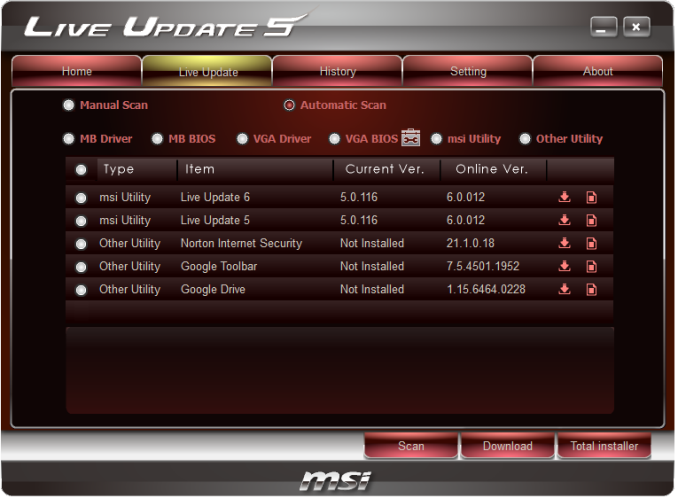 On the CD comes Live Update 5, and while version 6 is offered, it did not play well with the AMD system perhaps suggesting that it has not been updated for the 970 Gaming yet. Also of note is that I still want the option to remove Norton and Google Toolbar from my list of updates completely – this is a criticism that MSI knows, but we will have to wait to see if it is implemented. Nevertheless, the software functions as seamlessly as it should. 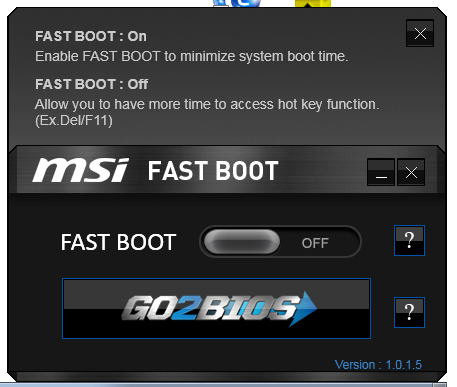 As a reviewer, Fast Boot is a feature I like because it provides an option to go restart into the BIOS and makes the process of testing overclocks easier. While our Windows 7 setup does not react much to the Fast Boot option here, where possible it does aim to provide a decrease in POST times. 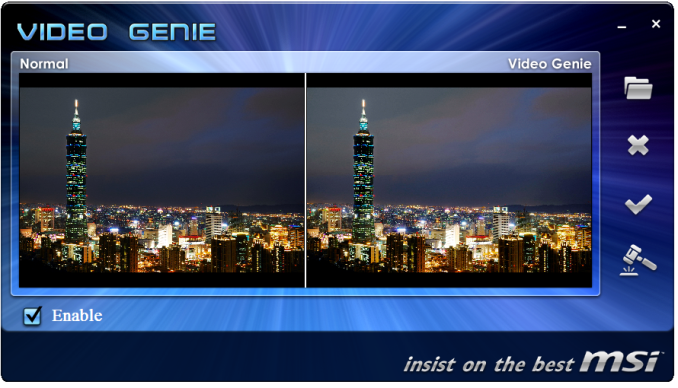 Video Genie is a little different as it attempts to adjust the dynamic contrast of the monitor being used when it detects a video scene that might not be optimized and lacking in detail. The example is shown above, although this is not a feature that MSI has been promoting recently. 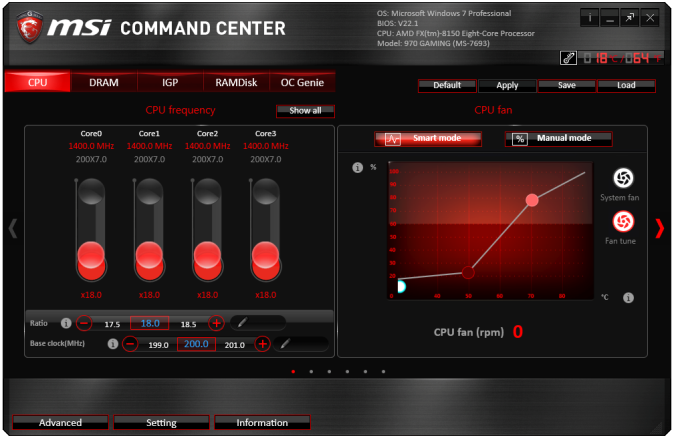 The last element of the deck is Command Center. Here we get an indication of the BIOS version, motherboard used, CPU installed, some basic overclock options and a fan gradient option. 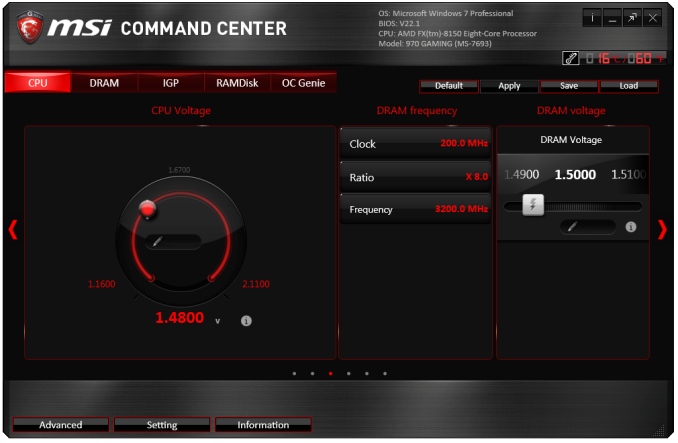 The big negative in Command Center, as I have mentioned on several MSI reviews in the past year, is the CPU voltage option. Here is a dial that shows the maximum voltage on one end, rather than a ‘safe’ maximum voltage. Not even extreme overclockers are going to use 2.11 volts, so why even offer it? Put a reasonable maximum (1.50 volts) and then give an ‘extreme overclockers’ button to open up the option a bit more, just in case someone decides to put enough volts through the CPU to break it. 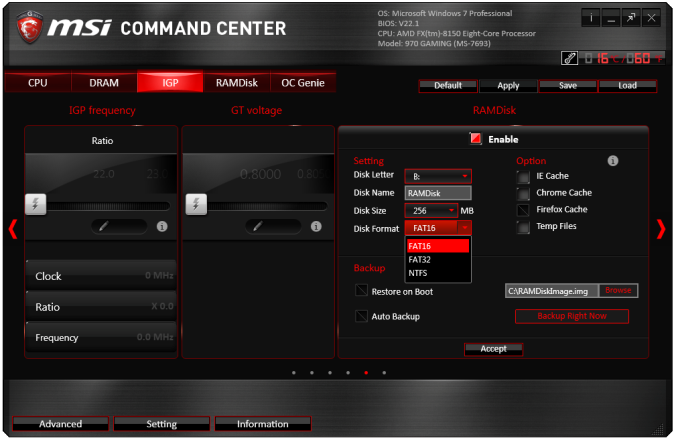 Command Center also offers a RAMDIsk option. The software is a little odd, requiring the RAMDisk to be enabled first then allowing users to choose their size, therefore requiring a reallocation of memory and doubling the time required to set one up. An interesting aside is that AMD charge $$$ for their RAMDisk software with their memory, while MSI gives it away for free with their motherboards, taking AMD out of a sale. 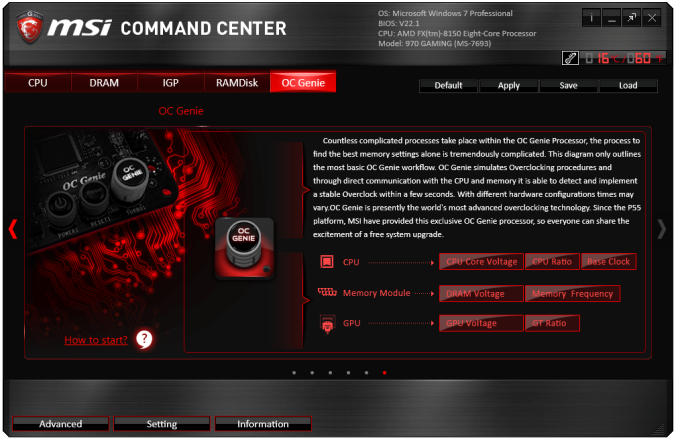 Users can also implement OC Genie from Command Center. Also included are sets of information menus for each of the parts of the motherboard: