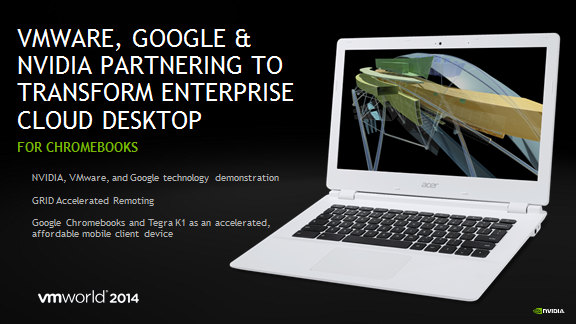 NVIDIA has been anything but shy about their GPU virtualization aspirations, making it a focal point for the company’s development since the launch of their first GRID cards back in 2012. The company sees GPU virtualization as becoming increasingly important for enterprises – just as CPU virtualization has over the last decade – and in the last 2 years has been working on executing a plan on break into the GPU virtualization market. Their hardware was in many senses the easy part, and served to solve the chicken and egg problem that many technologies face. The hard part? Bringing up the software ecosystem to make use of this hardware.

Which is why the company is particularly excited about this year’s VMworld conference, VMWare’s annual virtualization technical conference. After seeding the market with hardware and spending their time working with major virtualization software developers such as VMWare and Citrix, NVIDIA’s efforts are finally coming to fruition as these products integrate support in their hypervisors for the GPU virtualization mechanisms required to make the most of NVIDIA’s hardware. To that end NVIDIA and VMWare are announcing a pair of NVIDIA-centric developments from this year’s show.

First and foremost, GRID vGPU support on VMware’s vSphere product is nearing completion. With the final version expected to be launched next year, NVIDIA and VMware are now in the process of launching an early access program for existing users to begin end-user trials. 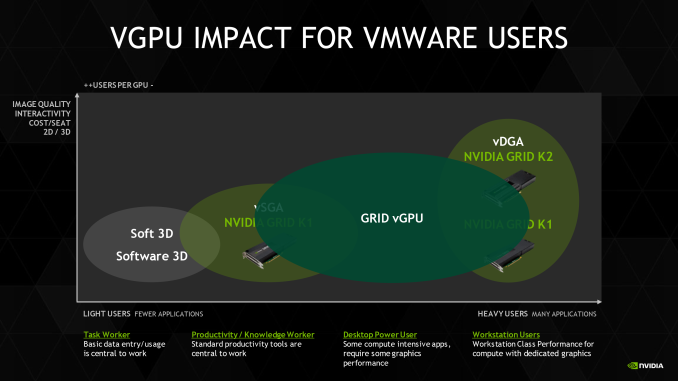 This program is targeted at existing GRID users who are already making use of VMWare’s more limited functionality vSGA and vDGA modes, which utilize graphics API wrappers or directly mapped (1:1) GPUs respectively. With vGPU support now up and running, clients can now experiment with time sharing the GPUs directly. This offers potentially much greater density than vDGA’s directly mapped GPUs, but is still going through real hardware and allowing full access to NVIDIA’s GPU drivers and features instead of the much more limited generic Direct3D 9ish feature set that vSGA offers. In NVIDIA’s world vGPU support doesn’t fully supplant either vSGA or vDGA, but it offers a middle ground between the high density of vSGA and the performance of vDGA, while also offering a higher density option that maintains full GPU access and functionality.

Meanwhile NVIDIA’s second announcement of the day is focused on the client side of the usage model, specifically when it comes to Chromebooks. As previously announced by Google and VMware, the firms have been working to bring VMware BLAST support to Chromebooks, and today NVIDIA is announcing that they will be the hardware launch partner for this project. The company’s Tegra K1 SoC will be the first Chromebook SoC to support BLAST, with NVIDIA leveraging K1’s hardware video decoder to decode the BLAST video stream. 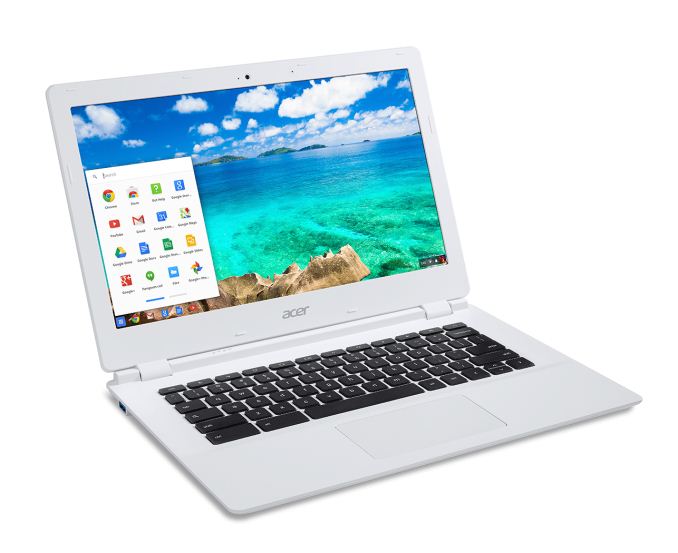 Acer’s recently announced K1-powered Chromebook 13 devices will in turn be the first Chromebooks out the door with this functionality. With the Chromebook software stack already bordering on being a thin client environment, NVIDIA, Google, and VMware believe using Chromebooks as actual thin clients is a natural extension of the device’s functionality. Meanwhile Chromebooks’ mass-market appeal means that the cost of these devices kept low due to their high production volume, allowing for what amounts to a 13” 1080p thin client laptop to sell for under $300, a much lower price than previous thin client devices. 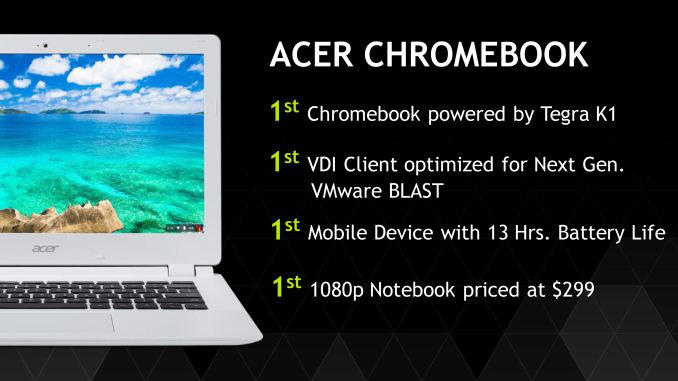 Ultimately for NVIDIA this furthers their own efforts in a twofold manner. By providing a strong economic incentive for virtualization this helps server hardware sales, but it also means NVIDIA gets a piece of the pie through client hardware sales. Meanwhile for VMware this furthers the reach of their own virtualization platforms, both figuratively and literally by getting more laptop-style thin clients on to the market.

Finally, as part of their keynote presentation, VMware has a short video from NVIDIA on the announcement, including a brief showcase of the Chromebook thin client in action.