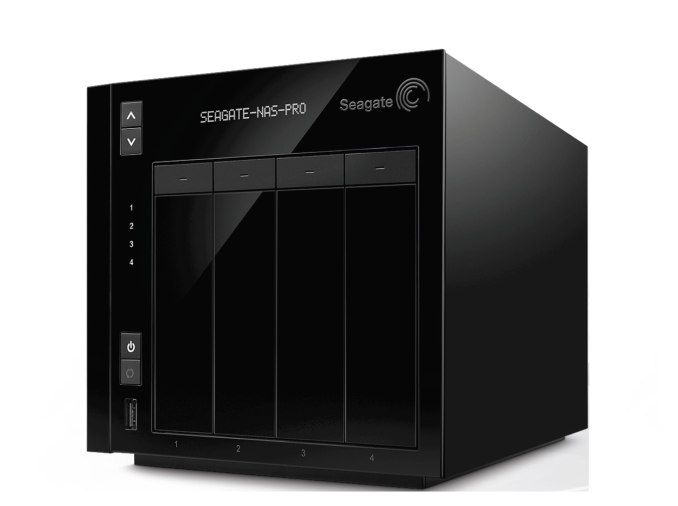 Seagate recently rebooted their NAS offerings, completely revamping their 2013 Business Storage lineup and dropping that software platform altogether. In its place, they adopted a Debian-based offering, NAS OS, development of which was started by LaCie prior to their acquisition by Seagate. In their 2014 lineup, Seagate has two classes of products, the NAS and the NAS Pro. While the former is suitable for workgroups of 1 to 25 clients, the Pro version pushes that up to 50.

Home consumers and power users form a rapidly growing market, signified by the wealth of features that Synology and QNAP are bringing to the table in their firmware / product line to target it. Knowing fully well that it takes time to tune the firmware to reach that market, Seagate has wisely decided to concentrate on the SOHO / SMB segment, which is also experiencing similar growth levels. In that segment, purchase decision-makers tend to prefer a single point of contact for the system as a whole, and this works to Seagate's advantage as a hard disk supplier.

We have already had a detailed look at the Marvell ARMADA-based NAS 4-bay, and today, we have results from our evaluation of the Intel Rangeley-based NAS Pro 4-bay. The NAS Pro 4-bay comes in five different SKUs, four of which are available for purchase right now. These are the diskless, 4 TB (2x 2 TB), 8 TB (4x 2 TB) and 16 TB (4x 4 TB) variants. There is also a 20 TB SKU (4x 5 TB), which will be made available after the launch of the 5 TB NAS HDDs (all the units with disks come populated with the Seagate NAS HDDs). We were sampled the 16 TB variant, but decided to evaluate the diskless configuration (since using the same disks across different NAS units ensures consistency in benchmarking). The specifications of the NAS Pro 4-bay are provided in the table below.

Visually, the main difference between the NAS 4-bay and the NAS Pro 4-bay is the presence of a LCM display above the drive bays on the front face in the latter. It provides helpful information about the status of the unit, as well as the DHCP IP. It also turns out to be quite useful when starting setup from a diskless configuration (there are slight differences between how the NAS and NAS Pro units behave in that case). Despite the initial differences, the NAS OS experience on both the NAS and NAS Pro units are essentially the same. The Sdrive mobile app / desktop program that Seagate provides for access to the NAS on-the-go has been talked about in our NAS 4-bay review. The same interface and functionality are available for the NAS Pro 4-bay also. These are aspects we will not deal with in this review.

In the rest of this article, we will first look at the Intel Rangeley platform in detail and how the NAS Pro 4-bay takes advantage of it. This is followed by benchmark numbers for both single and multi-client scenarios across a number of different client platforms as well as access protocols. One of the most important aspects that Intel Rangeley brings to the table is the AES-NI feature set, something which was not present in the last generation Atom-based storage platforms. We have a separate section devoted to the performance of the NAS Pro 4-bay with encrypted volumes. Prior to all that, we will take a look at our testbed setup and testing methodology.

The Seagate NAS Pro 4-bay can take up to four drives. Users can opt for either JBOD, RAID 0, RAID 1, RAID 5, RAID 6 or RAID 10 configurations. We benchmarked the unit in RAID 5 with four Western Digital WD4000FYYZ RE drives as the test disks. Our testbed configuration is outlined below.

The above testbed runs 25 Windows 7 VMs simultaneously, each with a dedicated 1 Gbps network interface. This simulates a real-life workload of up to 25 clients for the NAS being evaluated. All the VMs connect to the network switch to which the NAS is also connected (with link aggregation, as applicable). The VMs generate the NAS traffic for performance evaluation.