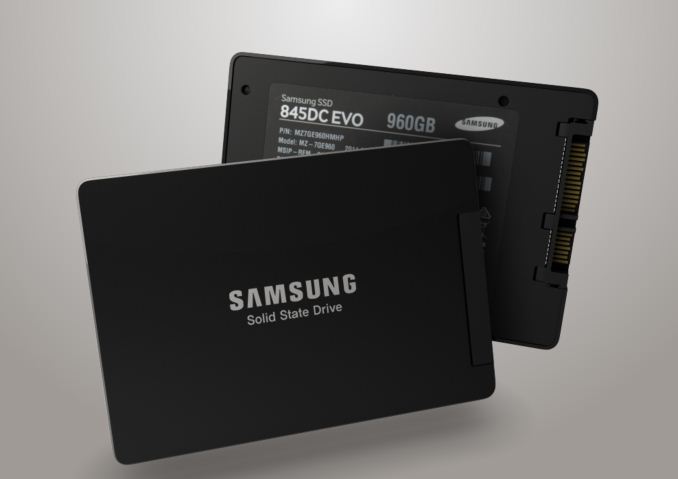 While this is technically not a Computex announcement, Samsung is launching their TLC NAND based 845DC EVO today. This isn't Samsung's first TLC based enterprise SSD as a while ago they announced the PM853T but that drive is OEM only and is thus mostly limited to Samsung's large OEM customers, whereas the 845DC EVO will be available in retail for small and medium data center use.

Essentially, the 845DC EVO is just the retail version of the PM853T as everything from the NAND to the controller and firmware are similar. Samsung is only disclosing that the drive uses 10nm-class NAND, although I'm fairly certain that it's the same 19nm process as found inside the 840 EVO. I hate to admit that I don't know the exact controller inside the drive because PM853T was never sampled to media but I do have samples of the 845DC EVO, so once I get back from Taipei I will open up the drives and see what's inside.

I don't have the full data sheet yet but Samsung's press release mentions that the drive is capable of up to 530MB/s sequential read speeds and 87K IOPS random read, which are quite typical for a SATA 6Gbps drive. The endurance goes all the way to up to 600TB, so while that is not MLC level, it's still pretty good given that we are dealing with much lower endurance TLC NAND (e.g. the 800GB Micron M500DC does up to 1.9PB) and the drive is more geared towards the read-centric enterprise market (e.g. web servers).

The pricing is very competitive in the enterprise segment. The 845DC EVO will be available in capacities of 240GB, 480GB and 960GB with MSRPs of $250, $490 and $969 respectively. I'll be reviewing the drives in detail once I get back, so stay tuned for our in-depth review in a few weeks.