Continuing our coverage of NVIDIA’s 2014 GPU Technology Conference, today we’re looking at NVIDIA’s Tegra-related announcements. As Tegra is primarily a consumer facing product, especially the pre-K1 parts, NVIDIA centers the bulk of their Tegra announcements around the annual Consumer Electronics Show in January. So what is announced at GTC just 2 months later tends to focus on developers and professional uses of announced products.

With that said, while NVIDIA isn’t offering much in the way of architectural details at the moment, they have given us a GPU-centric roadmap update for the Tegra product line. 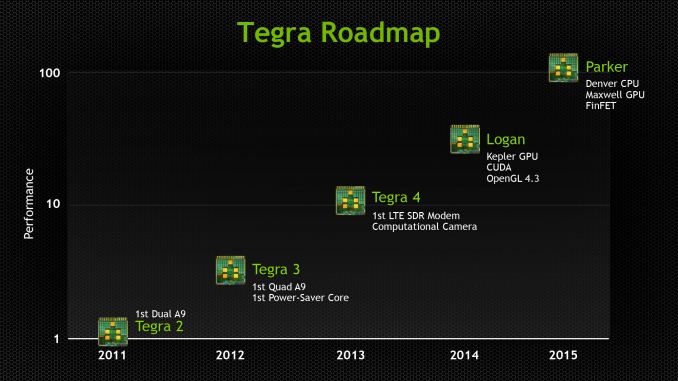 The new roadmap includes a new SoC called Erista, which we have limited details about. Scheduled for 2015, Erista will be based on a Maxwell GPU, affirming NVIDIA’s earlier commitments to get their Tegra line up to Maxwell in 2015. Unfortunately that’s all we know about it at this time; the CPU component, additional features, and manufacturing process have not been specified. That said, a little research shows that Erista is the son of Wolverine/Logan, so the fact that this isn’t a distinct product name but rather a name related to Logan (like Kayla last year) may offer a hint of what to expect.

Not separately shown on this roadmap but clustered under the K1 heading as the 64bit CPU, is NVIDIA’s alternative K1 design utilizing their Denver CPU rather than the ARM A15. The Denver K1 was announced back at CES, and from the perspective of this roadmap is equivalent to the A15 K1, since both utilize the same Kepler GPU. NVIDIA hasn’t offered up any additional Denver details at GTC, but we’re not expecting any this soon after CES, so we expect to hear more about it when the Denver K1 is closer to shipping (currently scheduled for H2 2014, likely the later part of that window).

However Parker is a mystery that we’re still tracking down. Parker is oddly not on this roadmap, and the introduction of Erista doesn’t help. Parker still is (as far as we know) a Denver + Maxwell + FinFET design, which overlaps with Erista’s unknown CPU + Maxwell design. Given that Denver K1 should be out this year and Maxwell is scheduled for next year regardless, the most questionable part of that combination is the FinFET aspect, presumably TSMC’s 16nm FinFET process. We’re still working on finding out more information on the current state of Parker, but we wouldn’t be surprised if Erista was the 20nm backup plan in case 16nm FinFET wasn’t ready in time.

Update: We received a brief response from NVIDIA on Parker: "Erista was moved ahead of Parker. We'll provide further updates later."

So this confirms Parker is still in the pipeline, and lends some support to our suspicions that there's a delay on the manufacturing side (rather than the architecture side).

Roadmaps aside, this week’s Tegra announcements are short but significant for the GTC crowd. The highlight of the Tegra product announcements here is NVIDIA’s new Jetson “TK1” development board. Jetson follows in the footsteps of Kayla, which was NVIDIA’s prior Tegra development board and was announced at the previous GTC. But whereas Kayla was essentially a prototype – a 2 chip solution using a Tegra 3 and a GK208 PCIe card, mounted on a mini-ITX board and intended for early development testing of K1-like GPU performance – Jetson is the final product. 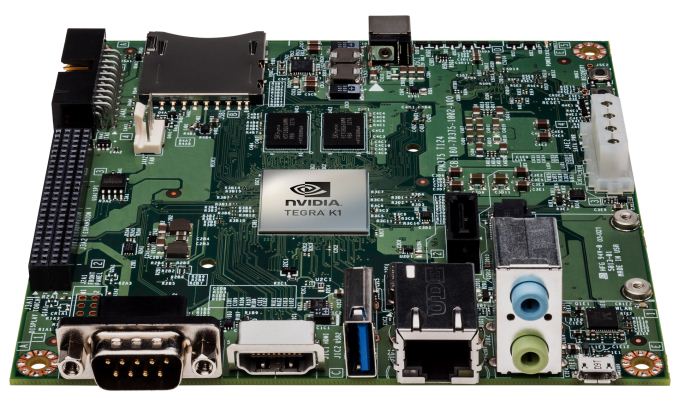 Jetson is composed of a Tegra K1 mounted on to smaller board (possibly Nano-ITX?), outfitted with 2GB of RAM and 16GB of NAND (eMMC) storage. The board provides a suite of I/O options including HDMI 1.4, analog audio in and out, GigE, SATA, mini-PCIe, USB, a suite of GPIOs, and an RS-232 serial port (apparently a highly demanded feature that Kayla lacked). NVIDIA’s release information doesn’t make mention of cooling, so at first glance this appears to be a bring-your-own-cooler affair, which shouldn’t be too difficult given K1’s sub-10W TDP.

Meanwhile Jetson’s software stack is composed of a 32bit version of Ubuntu 13.04 for Tegra processors. Layered on it is of course NVIDIA’s drivers and software stack, exposing OpenGL and the other common APIs on the graphics side, and CUDA and OpenCL on the compute side. Jetson will also be the first device to come with NVIDIA’s new VisionWorks middleware, which is a computer vision software package that provides APIs and software samples for a range of computational vision tasks, analogous to what the CUDA toolkit provided for GU programming and language development. VisionWorks includes code for  augmented reality, computational photography, robotics, human machine interaction, and driver assistance systems. NVIDIA has big plans for K1 in embedded systems, and VisionWorks is one way they will be priming the pump, by providing some of the software themselves to bring on board new users early.

From a programming standpoint, K1 (and Jetson as a result) are Compute Capability 3.2, which is essentially the GK110 feature set minus the dynamic parallelism functionality, and including all of the integer, register, and thread improvements that differentiate GK110 from GK10x. On that note, it’s worth mentioning that while Jetson/K1 has a unified memory pool – the first such CUDA capable product due to the integration of Kepler – the actual memory architecture isn’t fully unified. NVIDIA is essentially at an AMD Llano level of integration; full integration will likely come in the future with newer GPUs and CPUs.

As we mentioned earlier, Jetson is first and foremost targeted towards hardware and software developers looking to further develop software for deployment on finalized K1-equipped devices (phones, tablets, cars, etc). However because Jetson is a complete, COTS K1 device, there is significant buzz around the show about just utilizing Jetson as it is. For smaller companies who don’t need the space savings and customization of building their own K1 device, Jetson can be used instead, especially in bigger devices where Jetson’s size is not a problem. 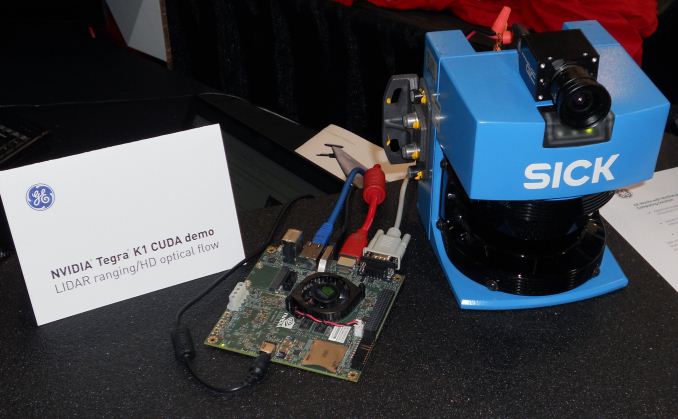 In fact the first K1 device we’ve seen up and running is a Jetson board, being utilized by GE Intelligent Platforms. GEIP is among the first Jetson users, and is showcasing the ability for Jetson/K1 to drive one of their combined camera/lidar sensors. The setup taps both the GPUs and CPUs to process data and identify the movement of objects, and interestingly despite the heavy workload from this kind of processing, only reaches approximately 75% resource utilization on Jetson. GEIP’s big market for this technology is of course defense applications (automated target identification) where they already do something similar with larger dGPU setups, but GEIP’s also investigating other uses such a medical, with a concept of a handheld ultrasound device.

Moving on, Jetson is expected to become available in April. NVIDIA is already taking pre-orders for Jetson over at their developer site, and in NVIDIA’s usually cheeky fashion will go for $192 – one dollar for every CUDA core on the K1. This also gives us an idea of when K1 consumer devices should be available, as the shorter lead time for Jetson (as opposed to radio certified mobile devices) means that NVIDIA can be shipping K1s for Jetson while also shipping K1s to their OEM customers for their devices.

On a lighter note, after some further investigation into the Jetson codename we’ve determined that NVIDIA has dropped their superhero codenames for this development board, finding no relation between “Jetson” and “Logan” or any other superhero. Our best guess is that NVIDIA is taking a futuristic spin, at least for development boards.

Finally, though it wasn’t covered in NVIDIA’s initial keynote, NVIDIA will be producing a second, better equipped board for automotive customers under the Jetson name. Dubbed Jetson Pro, the board is a customizable building block that uses a Tegra 3 processor as the core system component, with the I/O necessary to add on a number of different devices as an Enhanced Breakout Board (EBB). NVIDIA specifically notes that dGPUs are an option here, explaining the use of the relatively old Tegra 3, as it’s the most recent Tegra SoC to feature PCI-Express capabilities. 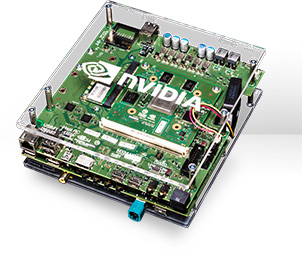