In order to assess the potential of the Kraken G10, we tested it on an EVGA GTX 770 ACX, a high performance graphics card with a good stock air-cooling solution. Testing is performed with the two cooling kits NZXT currently offers, the Kraken X40 (single 140mm) and the Kraken X60 (dual 140mm). In order to stress the GPU core to the maximum, we ran a cryptocoin mining algorithm at maximum intensity and allocation, a method that displayed considerably greater power draw (224W) than any 3D benchmark (≈174W during a Unigine Heaven run). It has the added benefit of being rather consistent in it's load. 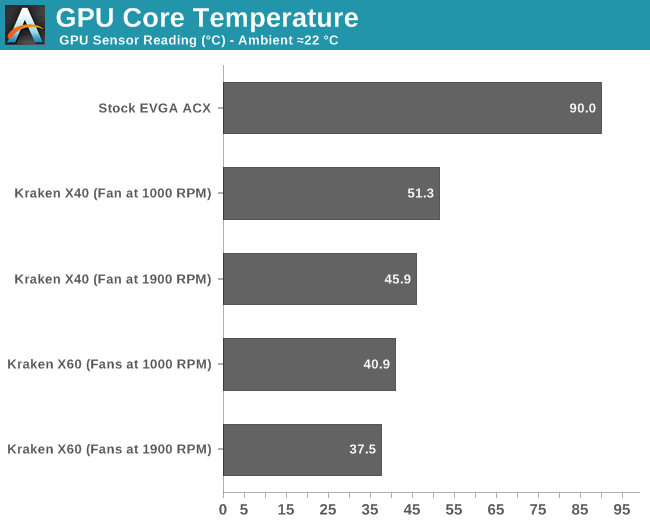 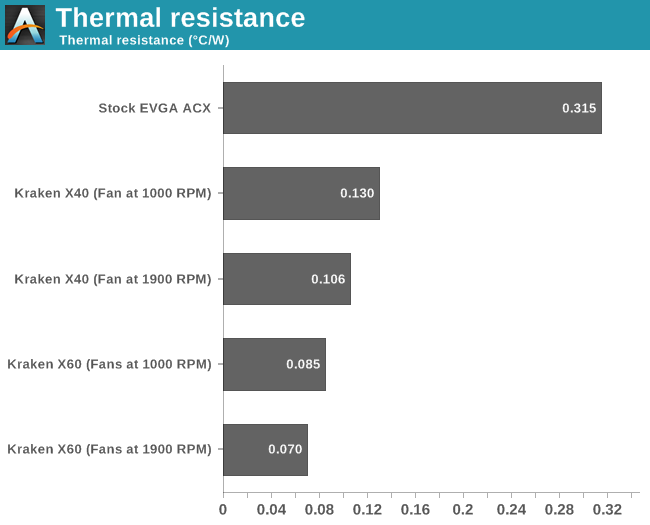 NZXT claims that the Kraken G10 can yield up to a 40% increase in performance (cooling), which isn't phrased quite right. The actual performance difference of cooling solutions is properly calculated by comparing the °C/W performance ratings, not just by comparing temperatures. While saying, "80°C to 45°C – oh, that's 44% lower temperatures" is factually correct, it doesn't account for the power element and since temperature (Celsius) is not zero based, there are (many) problems with only looking at temperatures. More properly, a 50% reduction in the temperature change over ambient would equate to a 100% increase in cooling performance, and a 100% reduction in temperature change over ambient would mean driving the equipment at below ambient temperatures, which is obviously impossible without specialized cooling (e.g. thermoelectric coolers).

Being nothing more than a steel bracket, the Kraken G10 essentially is a very simple product, yet it displays tremendous potential. One can wonder why no one else thought of this before (or at least, no one released a product like this until now), as Asetek's kits have been available for years. A liquid-cooling kit, even with its fan running at minimum speed, offers immensely better thermal performance than the stock air-coolers of modern graphics cards. This is especially good news for users that are trying to build low noise systems, as the stock coolers of high performance graphics cards are often difficult to deal with.

However, as convenient as the Kraken G10 may appear, there are some obvious limitations. One such limitation is that the fans of the liquid-cooling kit cannot be thermally controlled in relation to the temperatures of the graphics card. When installing such a kit on the CPU, the fans can be thermally controlled by the motherboard, but that's not an option here. Although fan control is partially possible for the kits with USB interfaces, such as the Kraken X40/X60 that were used for this review, this control is limited to the predefined settings of the user and does not adjust automatically depending on the load of the card.

Furthermore, even though the included 92mm fan takes care of the problem, liquid-cooling is limited to the GPU core alone. Custom liquid-cooling kits can implement the use of full coverage cooling blocks, cooling the entire card rather than just the GPU; however, even if we neglect all other disadvantages that custom liquid-cooling setups have, a single such block usually costs more than an entire closed-loop kit plus the Kraken G10 bracket.

Finally, in order to be useful you need a case with a radiator mounting point near the card itself, such as at the bottom of the case or on the HDDs cage(s), as the hoses of typical closed-loop are limited in length. It is unlikely that the radiator will reach the top or front panel in all but the smallest of cases, and multiple graphics card setups will only be possible in specific case designs. 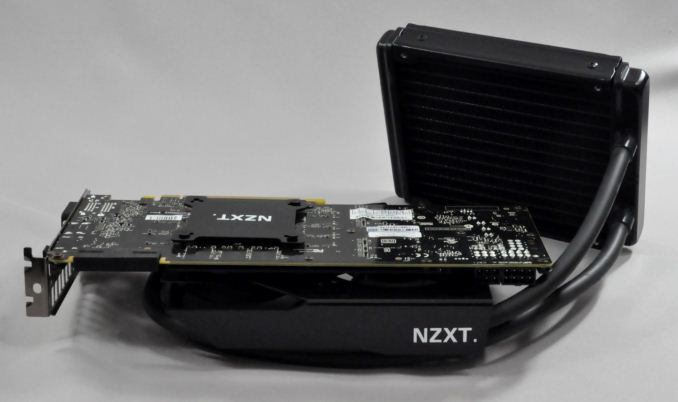 Despite these limitations however, the NZXT Kraken G10 remains a very appealing product. NZXT took the simplest of ideas, carried it through to fruition, and brought it to the market as a $30 USD product that (currently) has zero competition. It is a product that we would highly recommend to anyone who has a proper case and wants better cooling for a high-end graphics card without the cost and complexity of a customized water cooling kit.