As I said, there's a place for everything and everything is in its place in the SilverStone Raven RV04, and there's also a clear way the case comes apart and then back together again. As is typical of SilverStone cases, the RV04 is not an entry level design. Virtually nothing about it is toolless and assembling a system inside it requires at least a little doing. It mostly makes sense, but you'll definitely want to read the instruction manual.

For starters, the motherboard tray is removable, but not in the traditional sense. Traditional removable trays actually slide out of the back of the case and take the expansion slots with them, but this tray is for just the motherboard. It's held into place by notches, and three screws secure it. Remove the screws and you're left with a tray that has six standoffs preinstalled and markings that helpfully measure the size of your motherboard but also tell you which standoff holes to populate depending on your board's spec. The nice thing about this design is that it allows you to pop the I/O backplane in and then use the tray itself for leverage if you're dealing with a particularly thick or finicky backplane. 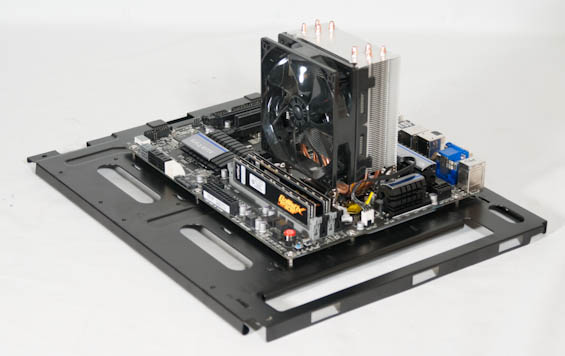 Before you do that, though, you'll want to remove the primary drive cage (the one that holds the five 3.5" drives) and the top panel of the case. That drive cage is going to obscure the primary ATX line on the motherboard, so you'll also want to wire up power to the motherboard before anything else. In times like these, a modular power supply can be a huge help.

3.5" drives securely mount to the inside of the cage, but you'll have to screw them in manually. The same is true for the 5.25" drives; the shields are easy enough to remove from the bays, but you'll have to use special thumbscrews included with the RV04 to mount the drives themselves. Installing 2.5" drives in the Raven RV04 is the stuff of nightmares, though. The manual recommends you remove the cages above the 2.5" drives when you do the installation, but that's not actually the issue. 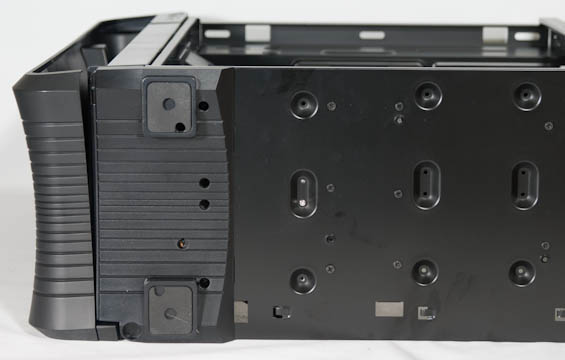 The placement of the screws for mounting the drives is the issue. The rear cage is probably easy enough to use, but the front one is obstructed by the plastic shroud around the front feet of the case. It's just a poor design.

Thankfully, there's much better clearance for the power supply in the RV04 than there was in the TJ08-E, and allowances were made to make installing expansion cards at least a little easier. There are holes in the chassis to allow a screwdriver to pass through and tighten or loosen the screws used to secure expansion cards.

Wiring the RV04 proves to be a bit of a mess, though. While the TJ08-E was an even more difficult case to wire, the RV04 is no slouch either. Part of the issue stems from the orientation of all the individual components. SSDs are oriented with their connectors towards the center of the case and designed to be cabled through holes in the tray below the motherboard itself. 3.5" hard drives are oriented parallel to the case itself, so their connectors face the CPU's heatsink. This is by necessity; drive cages can substantially obstruct front intakes, so orienting them in this fashion complicates cabling a little but also tremendously improves flow-through to the CPU. 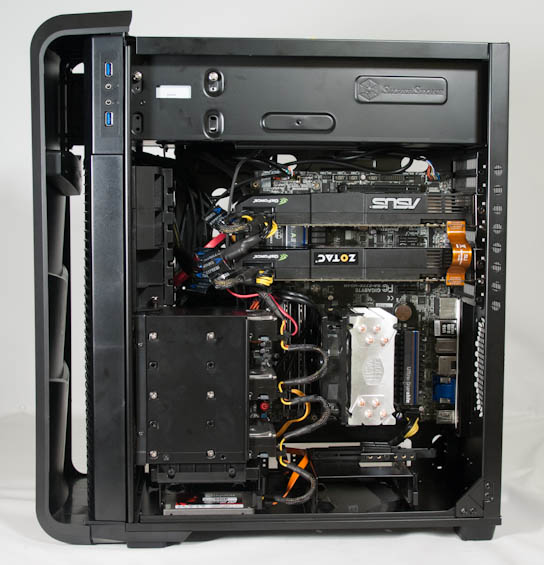 Case headers and SATA lines prove to be all over the map, though. There are ways many of these cables are supposed to be routed, but there are also loose cable loops from the way the front fans are wired together (and from there to their speed switches on the front). The RV04 is also remarkably shallow for an ATX case; this is undoubtedly by design and not necessarily a bad thing.

I found assembly of the Raven RV04 to be mostly sensible, but also in many ways needlessly complicated. The science behind the design is sound, but this is clearly engineered for efficient cooling first, with usability being a distant second. I feel like SilverStone could've done a better job simplifying and streamlining the design of the RV04. All through assembly, the same thought kept going through my head: "this thing had better be worth the hassle."