In and Around the SilverStone Raven RV04

What I'm about to say is likely going to surprise readers familiar with SilverStone products: the Raven RV04 is actually a little flimsy. Build quality is usually top shelf from SilverStone, and the chassis proper is mostly okay, but the outer shell is entirely "reinforced plastic." This is a company that does aluminum better than Lian Li, so to see chintzy plastic used for the fascia and top of the case is almost mirror-universe-level bizarre.

75% of my disappointment with the RV04's shell comes from the front door design, and this photo doesn't even tell the whole story: 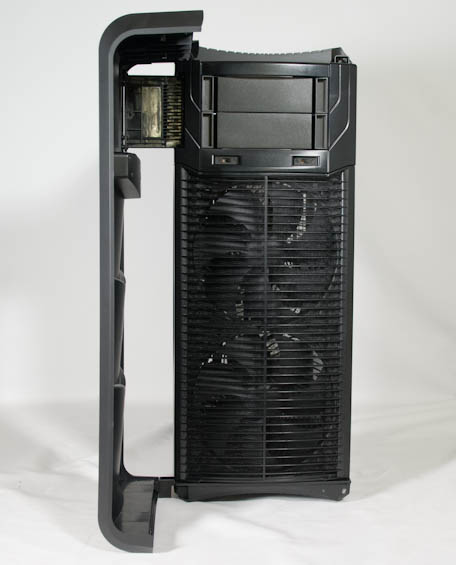 The hinges for the door are cheap plastic, and not just that, but the door doesn't close securely at all. Even a whiff of carpeting makes the door unusually difficult to shut correctly, and there isn't so much as a magnet to hold the door in place. There's just no way around it: the design is terrible, and I sincerely hope the higher end Fortress FT04 version of this chassis fixes it. I'm actually mystified as to why SilverStone included a door on the Raven RV04 at all; a flat front fascia with venting on the sides for the intake fans would've gotten the job done just as well. 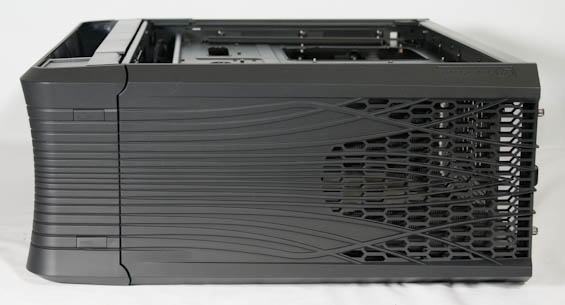 There's also a removable plastic shroud on the top of the RV04, but since it doesn't have to move like the door does, there's less of an issue with the design. This plastic feels at least a hair sturdier than the door, but the lined gamer-styling feels out of place for a SilverStone product. The Raven cases have always looked at least a little daring compared to the rest of SilverStone's lineup, but I'm skeptical as to how much of that was responsible for the success of the line. Aesthetics are not a universal science, though, and your mileage may vary.

What should really clue you in to the RV04's unconventional design is the fact that the windowed side panel is on the right side instead of the left; SilverStone flipped the motherboard layout just like they did with the TJ08-E. It makes a lot of sense once you take the side panel off and see just how they've arranged the interior, too. 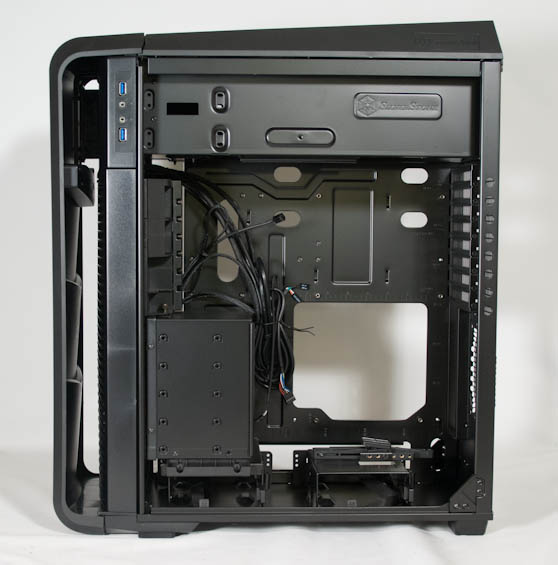 SilverStone is using just two 180mm intake fans to cool your entire system in the RV04, and the fans are evenly split into zones. The top fan blows directly on the expansion slots, while the bottom fan blows through the hard drive cage and the CPU cooler. Spacing of hard drive mounts allows a decent amount of air from SilverStone's bottom Air Penetrator fan to go through and cool the processor, and the top fan's airflow is almost totally unobstructed. The specificity of this airflow design is key to understanding the RV04. 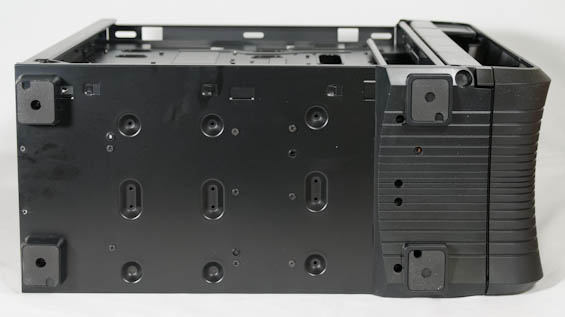 2.5" drives screw directly into the bottom of the RV04, but that's not the problem. The problem is that you have to somehow guide the screws into the recesses in that front plastic piece to use two of the four 2.5" drive mounts, and that's incredibly difficult.

The TJ08-E's internal design wasn't especially clean, but it was functional and delivered results given the relatively small stature of the enclosure. With the RV04, SilverStone has more space to get the design right, yet the interior still feels curiously slapdash. There's a place for everything and everything in its place, but I can't help but feel like this could've been a much cleaner design. The two bottom cages are just silly; do we really need seven 3.5" bays? Why not simplify the bottom cages into at least a single one that supports easier mounting of 2.5" drives? There's a lot of refinement that could've been done with the RV04, and I'm still shocked the door design shipped in this state.