We recently had the opportunity to take a meeting with Western Digital in San Francisco, California while a good chunk of the press were out in Taipei for Computex. It's difficult to get excited about new announcements from mechanical hard drive companies these days, especially with the way prices on the drives themselves haven't dipped much since the floods hit (with Western Digital being particularly guilty of maintaining those inflated prices), and with SSDs having become substantially cheaper over the past few months.

Which is what made our meeting with Western Digital so surprising. Western Digital is no stranger to networking and cloud-based products, but a full on line of routers? That's something else entirely. Western Digital is releasing four routers in their brand new My Net series, starting from the $79 My Net N600 all the way up to the exceedingly fancy $349 2TB My Net N900 Central, a combination router and NAS. Each router, top-to-bottom, is based on 802.11n and capable of running in both 2.4GHz and 5GHz bands. 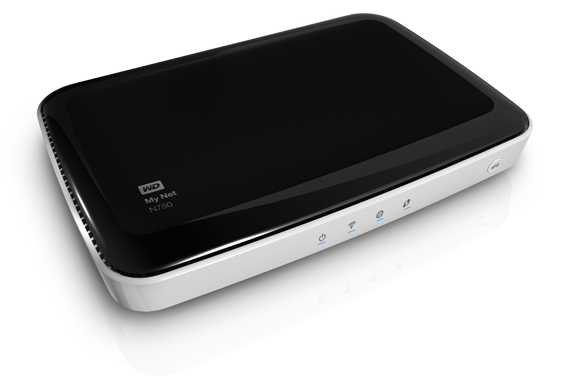 The My Net N600 is the entry level router, featuring four 10/100 ethernet ports alongside a WAN port, a single USB 2.0 port for networking printers or storage, 300Mbps throughput on either band (or a cumulative 600Mbps throughput on both), and standard antennae instead of high range ones. At $79 it looks like a decent enough value for a dual-band router, but the lack of gigabit networking hurts a little bit. That changes when you move up to and past the N750. $119 gets you four gigabit ethernet ports, increased range, a second USB 2.0 port, and up to 450Mbps access on the 5GHz band.

From there, we have two versions of the My Net N900 router: one with built-in network attached storage (the My Net N900 Central), and one without. Both feature full 450Mbps throughput on either 2.4GHz or 5GHz bands (or a cumulative 900Mbps on both), high-range antennae, gigabit connectivity, and DLNA certification. The standard N900 features a whopping seven gigabit ethernet ports in addition to the WAN (the N900 Central offers only four) along with two USB 2.0 ports (one on the Central), and retails for $179. If you want internal storage, the 1TB model runs for $299 while the 2TB model runs for $349.

Beyond the basic speeds and feeds, Western Digital is leveraging their experience with cloud storage by adding a cloud backup service to each model in the line, easily accessible from anywhere you have internet access. Cloud access can be managed through a browser, but also through applications for Windows, Mac OS X, Android, and iOS. Western Digital also includes software to allow for automated backups to the networked storage and to the cloud, but unfortunately the automation only goes one way.

There's also Western Digital's secret sauce, their FasTrack Streaming technology. FasTrack is essentially traffic prioritization technology implemented in the core SoC that can be customized by the end user to allow for simultaneous gaming, downloading, and video streaming over the network with minimal interruptions or hiccups. Standard FasTrack supports up to 21 open queues and comes with six services pre-identified, and allows the end user to add and configure more services as needed. More interesting is the FasTrack Plus technology, available exclusively on the N900 routers (standard FasTrack is available only on the N600 and N750), which uses a dedicated chip for the QoS implementation. It supports unlimited open queues and actually dynamically analyzes sessions to intelligently route data.

Ganesh actually has an N900 in house for review as I write this post. We believe the routers are based on Qualcomm Atheros chipsets, and will be confirming it in our review.

At the $179.99 price point, it is the same as that of the 802.11ac routers already in the market. However, WD touts the QoS implementation (FasTrack / FasTrack Plus) and three extra GbE ports on the router as
the differentiation points. Depending on how much of an early adopter the consumer is, it might make sense to go with WD's implementations as 802.11ac capable equipment is not widespread yet. Also worth noting is that the N900 is actively cooled. Note also that despite having a blue USB port, Western Digital's routers do not support USB 3.0.

All of these routers, along with a basic My Net Switch featuring eight gigabit ethernet connections for $69, should be available today from retailers and online at www.wdstore.com. Ganesh's exhaustive review of the My Net N900 is forthcoming.