Over the last few years of smartphone ownership, one of the most satisfying and somewhat surprising uses has been listening to good old fashioned FM radio, streamed through the internet and to my phone. They're not ideal for this, certainly. Phone speakers are tolerable at best for music, and often not loud enough to fill a room. And streaming, especially in WiFi dead spots around your house, can deplete your phone's battery quickly. And yet, dedicated internet radio devices have remained a bit of a niche; and a niche often reserved for those with money to spare. The earliest internet radio device, the Kerbango was a $300 flop, whose legacy (if not looks) and price carry on with Tivoli Audio’s Networks internet radio. And though cheaper devices have rolled out, including Logitech’s Squeezebox, the prospect of buying a device solely dedicated to streaming internet radio limits the appeal to buyers. 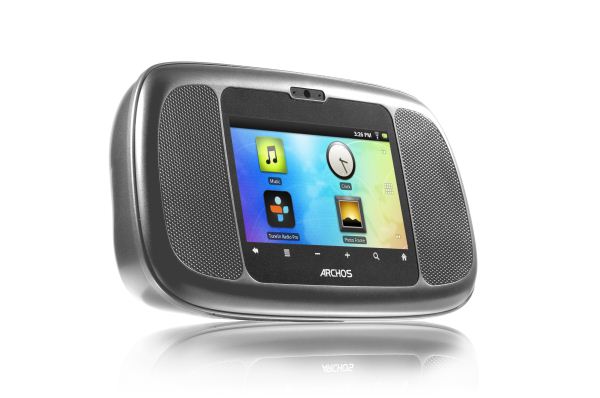 Archos, no stranger to undercutting on price and focusing on media playback, introduced their Archos 35 Home Connect last year, to compete in this space by leveraging Android to bring more than just internet radio to your home. Priced at $130, Archos has basically taken 2010-era smartphone internals (TI's OMAP 3630, indeed) and strapped them to a pair of speakers and a 3.5” screen. Does this repurposing of Android make for a compelling buy? Let’s find out.

The design of the Home Connect is simple, if a little bland. The 3.5” screen is centered on the device and flanked by the speakers. The traditional Android controls (back, menu, search and home) are joined by volume controls as soft buttons just below the screen. A VGA front-facing camera sits just above the screen, and around back we find a microSD slot, micro USB port (for power and PC-connection), 3.5 mm headphone jack and a power button. The casing is glossy, grey plastic and though there’s a certain heft to the device, this doesn’t feel like a device that would survive a terribly large fall.

The display uses a TFT panel, which lacks in resolution and image quality. At 480x272, and producing washed out colors and blacks not much darker than the case, you probably won't watch a lot of video on this screen. This, despite Archos typical dedication to including extensive video codec and container support. More frustrating than the display, is the touchscreen layer. I’ve never met a resistive touchscreen I’ve liked, and though this one is no more offensive than any other, it’s still the most frustrating aspect of the Home Connect. Key presses are often missed and swipe gestures are an exercise in frustration. Some hardware buttons could have gone a long way to remedying the problem, particularly if a directional pad were included. Better still, swapping the resistive layer for a capacitive one would be like mana from heaven.

Android As An Appliance

Though they tout the nearly limitless number of internet radio streams available, Archos doesn’t advertise this simply as an internet radio. Leveraging Android as the operating system means that the device is as versatile as the apps you can install (on Android 2.2, at least). Pre-installed apps are mainly media centric, though Tango is included for video calling. Angry Birds is the only truly surprising inclusion; if scrolling on a resistive screen is difficult, gaming is torturous. To download new apps users use a special version of AppsLib, whose catalog is broad, but unimpressive. The top free app is a Google Apps installer that grants the device Market access, a suitable testament for AppsLib’s selection. With Market installed the limiting factor is that resistive screen. Media streaming apps (Netflix, Pandora, etc) work well, though inputting usernames and passwords is challenging. Productivity and messaging apps are made almost unusable by the touchscreen, but then you probably have a phone, tablet or PC nearby for that. There’s just no getting around it, Android notwithstanding, this is a streaming device first and foremost.

The pre-installed internet radio app is one of the best, Tune-In Radio Pro. The parent company RadioTime, first developed an engine for aggregating internet radio streams in 2003 and is put to use in Logitech’s Squeezebox and other streaming devices. The Tune-In Radio app was introduced in 2008, and after a few years has matured into a feature rich, stable service with apps on iOS, Android, BlackBerry and Windows Phone devices. The “Pro” edition of the app caches content allowing users to pause and time shift streams. It’s not quite Tivo-esque since there’s no facility for scheduling recordings, but a nifty feature for live content, or playing back a song. Users can easily search for streams based on genre, location or name. Station and track data is updated on screen, on streams where it’s available, and the interface is easy to use, if a little drab.

So, we’ve settled on this as a media playback device, how’s it do? Tivoli’s speakers are all high-end components designed to match their top dollar price. These . . . are not. That’s not to say they’re without merit. Indeed, if you’re used to listening to music through your phone’s speaker, this is much better. Stereo separation isn’t huge, but volume is much better and the range is sufficient for internet audio streams. As a frequent NPR listener the speakers seem perfect for the spoken voice, with a broad resonance that gives voices a fullness that a small phone speaker fails to do. Music doesn’t have the impact that a set of larger speakers and separate sub woofer would, but there’s much more bass available than on your phone. Sound is mostly distortion free as you raise the volume, though I suspect the speakers could be driven louder and Archos simply set 100% to be well within the speakers capabilities. Audio then, is great for an Android device, but won’t wow those who’ve bought anything from B&O.

Though typical use case is as a plugged-in device, the home connect does have a battery, so it can be carried around untethered (but within range of your wireless network). Battery life while streaming isn’t quite all-day, figuring closer to four hours than eight, but if you’re around the house you’re probably not too far from a microUSB charger no matter what room you’re in. WiFi range is as good around my house as any other WiFi connected devices, though the thick walls of this old house make horizontal penetration much worse than vertical. Though 802.11 a/b/g/n is offered, users are limited to 2.4 Ghz bands, making it vital to position it farther from your microwave for kitchen use.

With the 35 Home Connect, Archos tries to answer the question, "Is Android a good platform for an internet appliance?" Past internet appliance efforts (the Chumby among them) have found little traction; while streaming audio devices have been hampered by their limited abilities and high cost. While the 35 Home Connect acquits itself well as an audio streamer, it falls short as a broader internet appliance. The display is adequate, and the Android build is stable and effective. But a resistive touchscreen makes the experience less than stellar. Being able to expand services by adding apps (like Spotify) make this device competitive with other devices at the same price point. But there’s just no getting around the fact that Android is a touch interface, and if touch response is lacking, the experience just won’t cut it. That said, I love the idea of the Home Connect and hope Archos (and others) continue to refine the genre. Same device with an OLED screen and capacitive touch, and you have a real winner.

{Ed. note: We've foregone presenting our usual testing data because of the nature of this product. If you're a developer or just curious, feel free to e-mail me at the by-line link and I'd be glad to share.}