Equipped with a full GB of memory and 16GB of NAND, the Tegra 2 based Atrix 4G has one very unique feature: it can be docked into a custom ultra thin notebook chassis and used to drive the notebook. Motorola calls this its webtop dock: 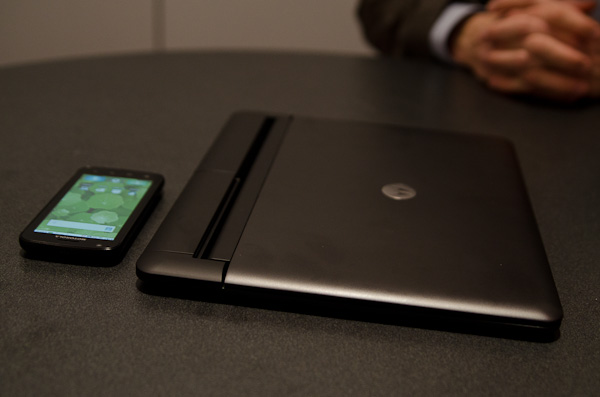 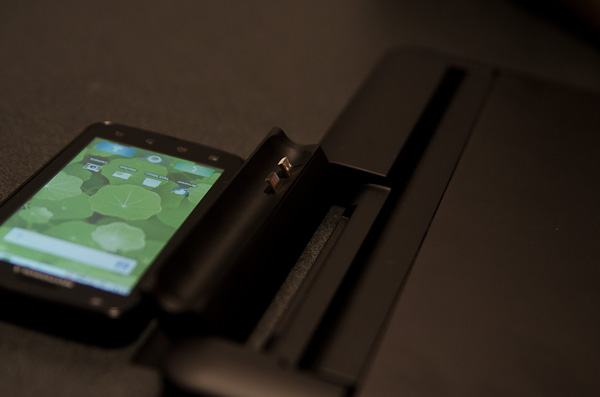 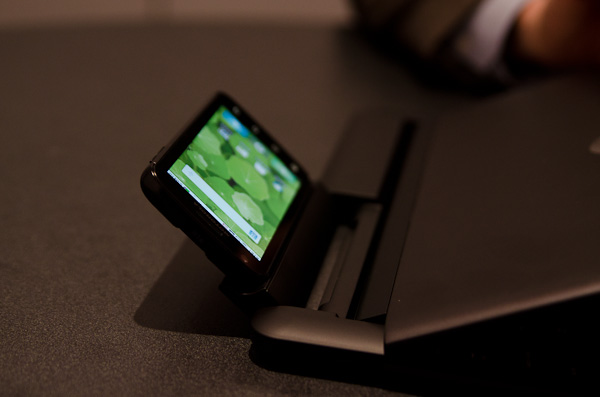 The webtop dock looks like an oddly shaped, ultra thin notebook. The Atrix 4G’s dock remains hidden until you flip it up. Slide the Atrix 4G into place and within several seconds you’ll automatically be dropped into the webdock app: 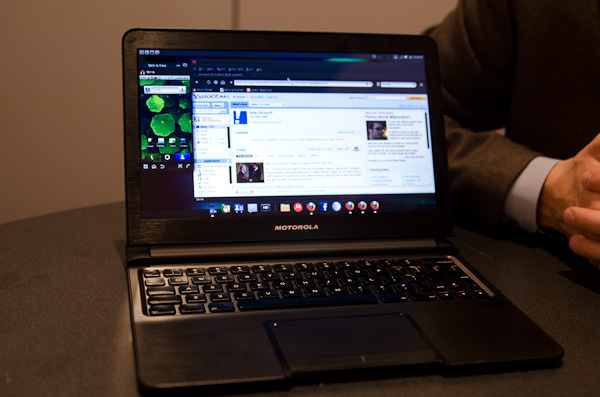 The webdock app is a unique environment. You get a scaled down version of your smartphone desktop on the left side of the display, while on the right side you get a full fledged Firefox browser compiled for ARM. 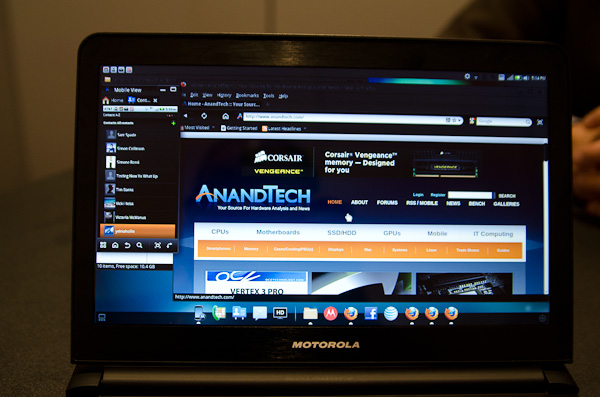 Browsing performance isn’t great, but it’s not unusable. The large trackpad supports scrolling with two fingers, or you can tap space to jump down a full page just like you can on a desktop/notebook.

There’s an OS X-like dock along the bottom of the screen that lets you fire up other apps (e.g. file system browser) or switch between open applications. You can also alt+tab between applications. Doing so will bring up an OS X Exposé like screen and not-so-smoothly animate tabbing through windows. It’s not a full blown PC experience, but it is honestly workable. 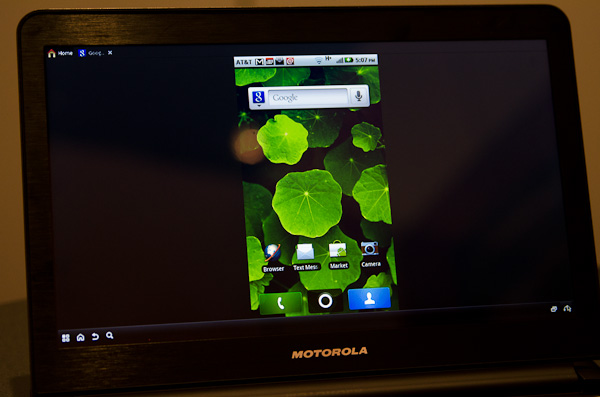 If there are apps within your phone that you want access to you can simply take the phone window full screen. You can even rotate it without moving the webtop: 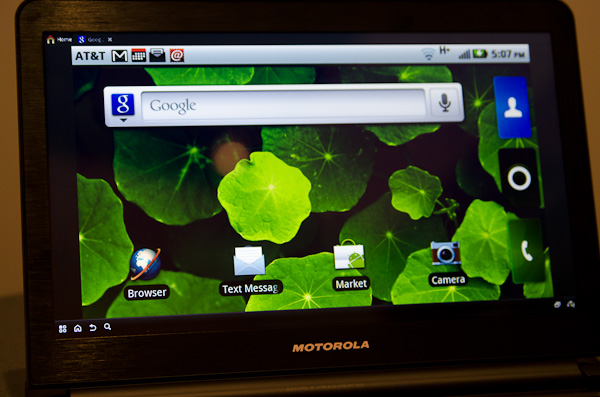 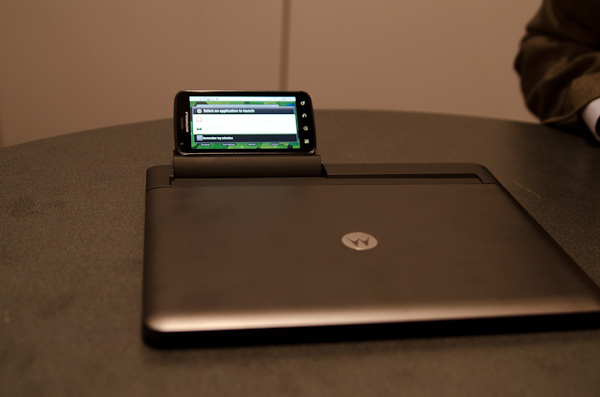 When you’re done with webtop mode, simply close the lid and your phone returns to normal. Motorola saves the state of your webtop so when you dock your phone again you get the exact same windows open as you had previously. Motorola insists that your webtop state is saved regardless of what you do to the phone as long as you don’t remove the battery - implying the webtop state is saved to NAND. 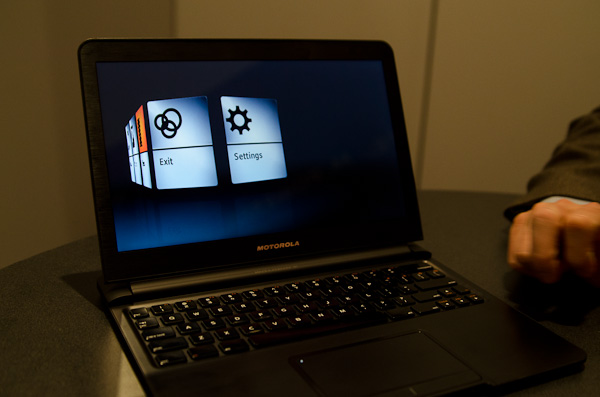 The Atrix 4G will ship with an entertainment center app that can be used in webtop mode. It’ll give you access to all media content on the phone and let you play it back on the webtop (or when used in the media dock and connected to an HDTV). NVIDIA’s Tegra 2 can decode high bitrate 1080p, however I don’t believe it supports decoding high profile H.264 1080p - only main and base profile content. We’re almost at the point where you can play anything on your smartphone, but I suspect it’ll take another two years or so before we are completely there on the high end phones.

Motorola ran through a quick demo of a Citrix app running on the docked Atrix 4G, giving us remote access to a Windows 7 PC on the smartphone powered webtop. The entire solution is clearly very functional, the question is whether or not it’s going to tempt users away from a netbook or other PC solution. 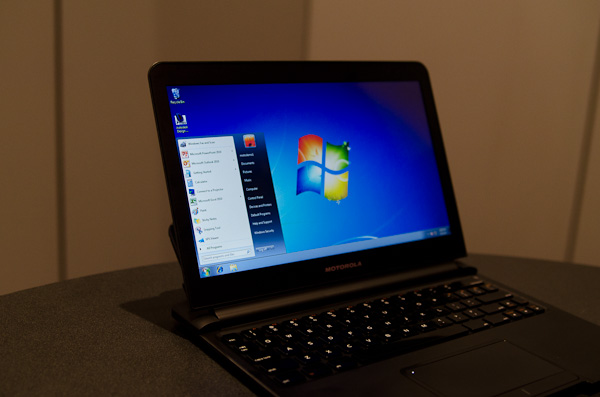 Windows 7 piped over the internet, display and interaction powered by Motorla's Atrix 4G - yep, a smartphone giving you access to a Windows PC

There’s clearly a lot of potential with these ARM based devices and over the next three years we’re going to see them get even more powerful. NVIDIA’s vision is a future where mainstream PCs are smartphones docked (perhaps wirelessly) to larger displays and input devices. Motorola took a major step in that direction at this year’s CES.

Within 24 months we will have quad-core out-of-order ARM based microprocessors in our high end smartphones. If paired with an elegant dock solution that’s affordable, will that be enough to go head to head with a netbook? 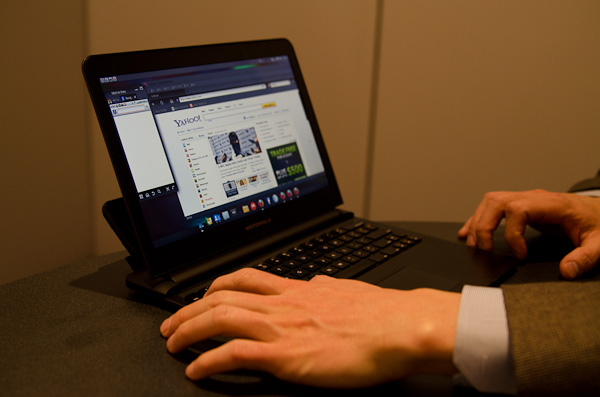 It works! But a Chrome OS Notebook feels quicker, which will win?

Personally I can see it going either way. While the docked smartphone is definitely compelling, one of the major reasons to want to dock a single device and use it in multiple locations is if the content on that device is 1) large, 2) plentiful and 3) difficult to move around otherwise. I’m not sure smartphones today have enough content on them for this to inherently make sense. Now when smartphones ship with 100GB of storage in a few years...

The biggest question in all of this is what happens to Intel and AMD as ARM tries to move up the chain. One thing is for sure, Intel’s Atom strategy, at least today, isn’t aggressive enough. For a company less than a year away from transitioning to 22nm, there’s no excuse for Intel to continue to ship Atom at 45nm.