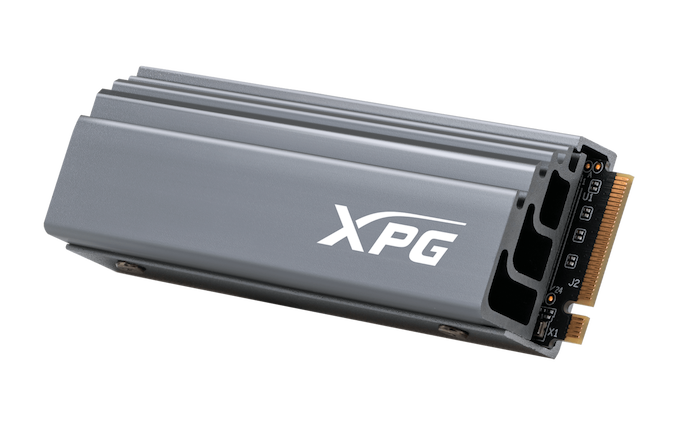 A year ago at CES 2020, ADATA previewed three upcoming PCIe 4.0 consumer SSDs planned for release in 2020. As with many things last year, that didn't go exactly as planned, but two of those drives have now hit the market—albeit with different model names than ADATA was using a year ago. The XPG GAMMIX S70 has now taken over as ADATA's top of the line consumer SSD, and it is starting to hit the (virtual) shelves just in time for CES 2021.

Last fall, ADATA launched the XPG GAMMIX S50 Lite as one of the first PCIe 4.0 SSDs targeting mainstream consumer usage. It uses Silicon Motion's 4-channel SM2267 controller, so it isn't aiming for the performance crown that most PCIe 4.0 models are vying for. The XPG GAMMIX S70 was also announced last fall, but only recently hit the market. It was listed on ADATA's own online store before the end of the year, but didn't hit any third-party retailers until it showed up on Newegg last week.

The GAMMIX S70 is particularly interesting because it marks the debut of a new competitor for high-end consumer SSD controllers. Innogrit was founded by storage industry veterans including a bunch of former Marvell employees. They came out of stealth mode at Flash Memory Summit 2019 with a full roadmap of client and enterprise NVMe SSD controllers, and at CES 2020 it appeared that their IG5236 "Rainier" controller had scored several design wins. The GAMMIX S70 is the first we're aware of to actually ship.

The GAMMIX S70 displaces the Phison E16-based GAMMIX S50 as ADATA's flagship consumer SSD and goes up against other second-wave PCIe gen4 SSD like the Samsung 980 PRO, WD Black SN850 and Phison E18-based drives like the Sabrent Rocket 4 Plus.

The Newegg listings for the GAMMIX S70 are at ADATA's introductory MSRP of $199.99 for the 1TB model and $399.99 for the 2TB, the same price points as the Sabrent Rocket 4 Plus and slightly cheaper than the Samsung 980 PRO or WD Black SN850. Our initial testing of the 2TB S70 has showed promising performance, but ADATA gave us a heads-up that there's a firmware update on the way so we're holding off on drawing conclusions for the moment.

With the Phison E18 and Innogrit Rainier controllers now shipping, and the in-house designs from Samsung and Western Digital, we're waiting on only Silicon Motion's SM2264 controller to round out this second wave of PCIe 4.0 NVMe SSD controllers. A year ago, ADATA had planned to make use of the SM2264 in the third PCIe 4.0 SSD they previewed, but there's no sign of it or any other SM2264 products being ready yet.

Interested in more of the latest industry news? Check out our CES 2021 trade show landing page!