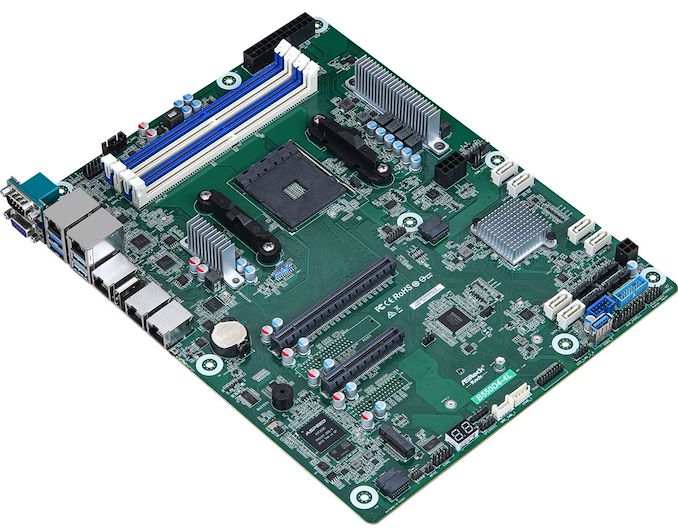 ASRock Rack, the professional arm of ASRock, has launched an interesting B550 model which is aimed at the server and workstation market, but uses the mid-range chipset. The ASRock Rack B550D4-4L benefits from support for AMD's latest Ryzen 5000 series of processors, with a BMC controller, support for up to 128 GB of non-ECC DDR4-3200 memory, and includes a single PCIe 3.0 M.2 slot from the chipset.

The main feature on the ASRock Rack B550D-4L, which other B550 models do not have, is the inclusion of an ASPEED AST2500 BMC controller, which adds IPMI configuration access across a network. A Realtek RTL8211E provides connectivity for the IPMI management, and it also includes four more Intel i210 Gigabit Ethernet controllers with RJ45 ports on the rear. Also present on the rear panel is a pair of USB 3.2 G2 Type-A and two USB 3.2 G1 Type-A ports, with a single HDMI output for integrated graphics, a D-sub output for the BMC controller, and a DB9 serial port.

Designed for use in a server and workstation environment, the ASRock Rack B550D4-4L uses a transposed AM4 PGA1331 socket with four memory slots located horizontally along the top. The memory slots allow for up to 128 GB of ECC and non-ECC UDIMM DDR4-3200 memory, while for storage, the board includes a single PCIe 3.0 x4 M.2 slot with support for SATA drives too. For conventional storage drives, ASRock Rack also includes four SATA ports powered by the B550 chipset, which supports RAID 0, 1, and 10 arrays, while an ASMedia ASM1061 chip controls another two ports. 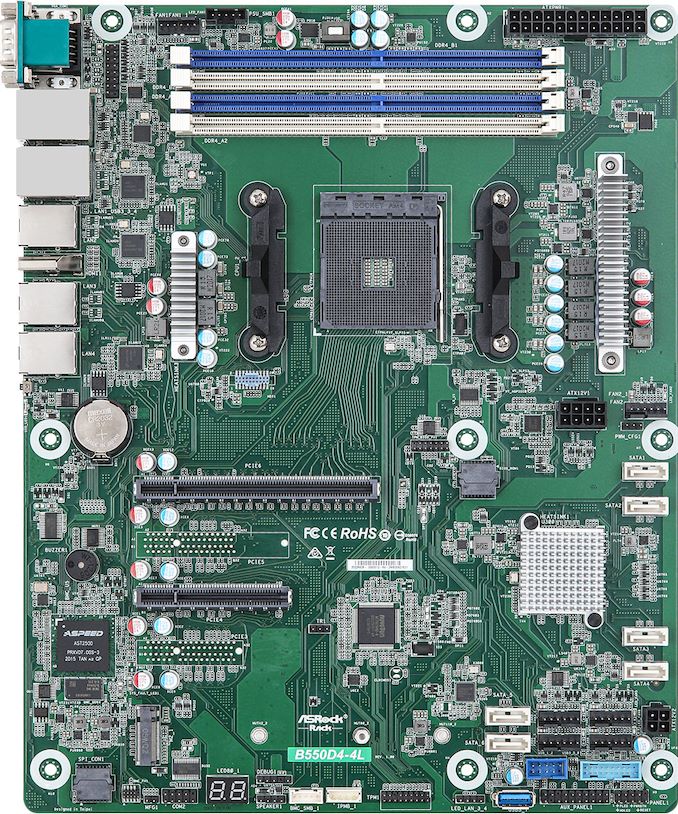 The board uses a simplistic design, with a green PCB, which is typical of server-grade and workstation models. Towards the center of the B550D4-4L is a full-length PCIe 4.0 x16 slot, with a half-length PCIe slot that runs in Gen4 x4 mode with a Ryzen 5000 processor installed. This board technically supports Ryzen 5000 (Gen 4), Ryzen 4000G APUs (Gen 3), and Ryzen 3000 CPUs (Gen 3), along with all Pro counterparts, but ASRock doesn't go into detail about how the PCIe is split with the other processors.

Located around the PCB is plenty of connectivity with a BMC_SMB header, a TPM header, a PMBus connector, as well as six 6-pin fan headers. It uses a conventional 24-pin 12 V ATX power input for power to the motherboard, with a single 8-pin 12 V EPS connector for the CPU. There is also a two-digit debug display for monitoring POST codes.

Although the ASRock B550D-4L will fit conventional chassis with its ATX size, it's primarily designed for 1U chassis and professional use cases such as server and workstation systems. ASRock hasn't unveiled any information about when it can be expected to launch at retail.