The positioning of the Snapdragon 765 Reno3 Pro 5G versus the Dimensity 1000L Reno3 5G is an extremely interesting one. By all means, the regular Reno3 is supposed to be the lower-end device and in fact does cost less than the Pro variant of the phone. Logically, we would expect OPPO here to choose the lower-end SoC for the Reno3 whilst the Reno3 Pro gets the better performing chipset. Although that’s what everybody would assume at first glance, things aren’t quite as straightforward.

The although the two devices and SoCs are seemingly positioned close to each other, they’re very different in terms of CPU capabilities. There are two factors at play here: first of all, the MediaTek chipset outright has a core-count advantage over the Qualcomm design by simply having four big cores instead of only two. That’s already a major difference and usually the kind of differentiation you’d expect from SoC at different class categories.

Secondly, MediaTek’s design uses newer Cortex-A77 cores whilst the Snapdragon uses last year’s Cortex-A76 IP. The Cortex-A77 is generally 25% better clock-for-clock compared to its predecessor, which seemingly compounds the processing power ability difference between the two SoCs and Reno3 phones. Qualcomm does have an advantage in terms of clocks speeds which does slightly make up some of this difference: at 2.4GHz on one of the Cortex-A76 cores it’s 200MHz ahead of the MediaTek chipset, which should reduce the expected performance gap a little bit.

Another big difference between the two SoCs is the fact that MediaTek uses TSMC’s 7nm node, while the Snapdragon 765 is manufactured on Samsung’s 7LPP node, with the only other public silicon out there manufactured on this process technology being Samsung’s own Exynos chipsets. 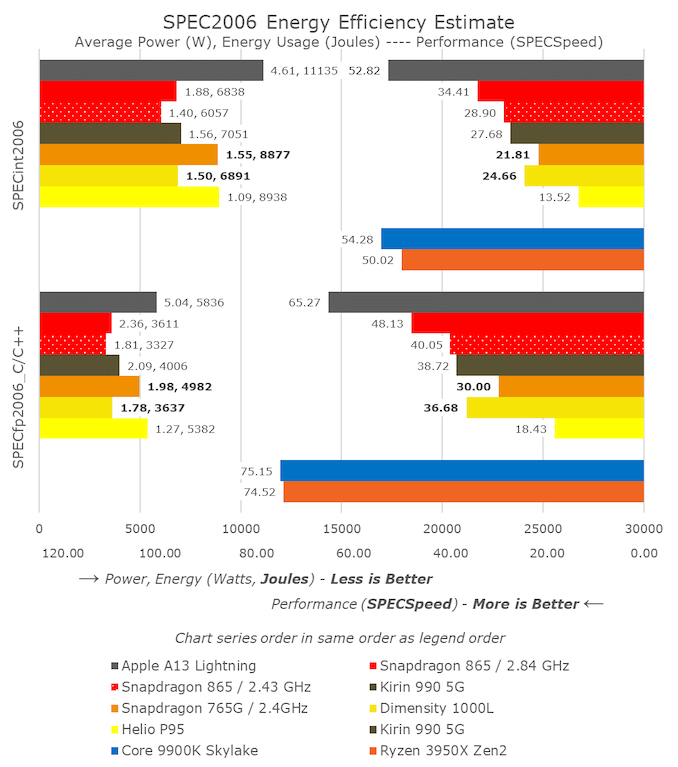 Furthermore, the Dimensity-powered Reno3 5G is able to do this whilst consuming less power and energy than the Qualcomm chipset. Generally, we expect this difference to be process-node related as we highly suspect Samsung’s 7nm node being less power efficient than TSMC’s process technology. 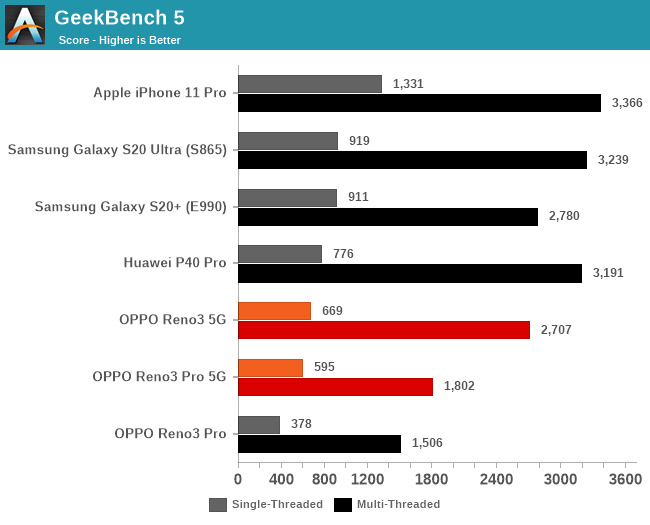 Whilst we don’t usually run SPEC in rate mode (multi-process test), GeekBench5 very much showcases the multi-threaded performance advantage that the MediaTek-powered Reno3 5G has over the Reno3 Pro 5G: With a score of 2702, it’s 50% faster than the 1802 score of the Snapdragon 765. 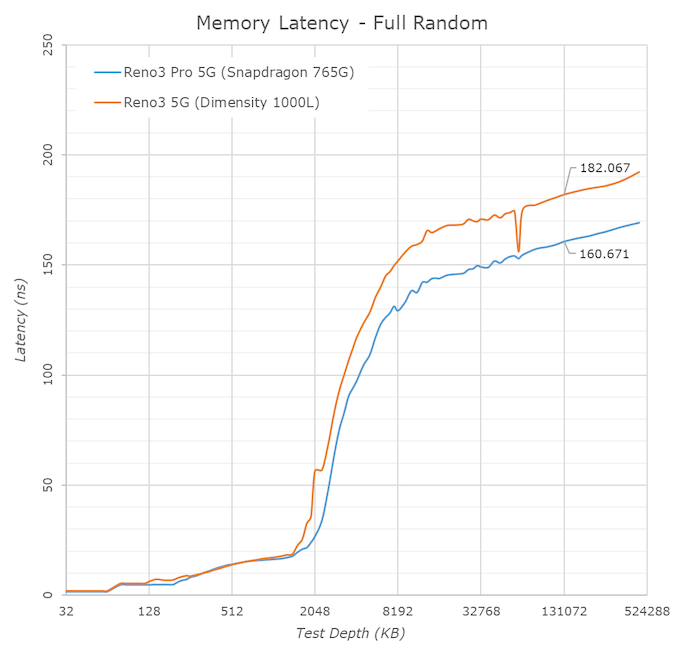 The one area where I did note that the Snapdragon chipset outperforms the Dimensity counterpart is memory latency. On the part of the CPUs, the Qualcomm chipset seemingly has a lower latency memory subsystem that allows it roughly a 13% latency advantage in full random DRAM memory accesses – or around 22ns at a test depth of 128MB.

The memory characteristics between the two SoCs are quite different, as the MediaTek chipset does showcase stronger CPU-side memory bandwidth, particularly in memory reads that reach up to 19GB/s versus 13.3GB/s for the Qualcomm chipset, with a similar advantage in memory copies, although the Snapdragon seems to have faster accesses and more bandwidth for memory writes.

All in all, until now it seems that the MediaTek powered chipset has a clear advantage in terms of performance and power efficiency, which actually makes sense as the Dimensity 1000L on paper just is a higher specced piece of silicon.