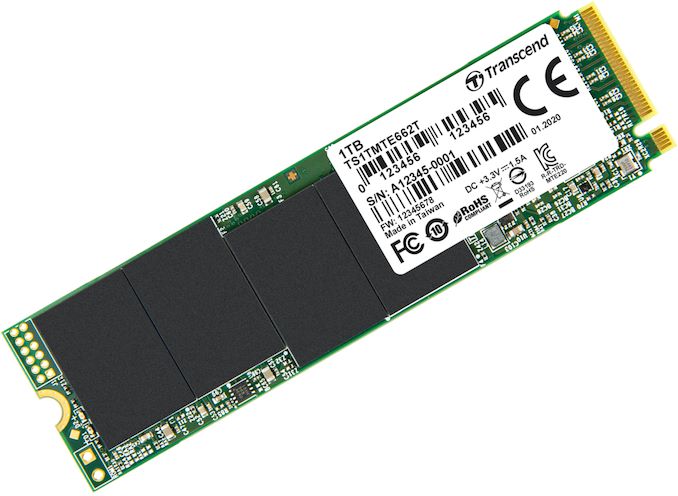 Though, as always, it takes some time for newer technologies to filter down into the conservative embedded/industrial market, the time has finally come for 96-layer 3D TLC NAND. SSD maker Transcend recently introduced its high-performance MTE662T SSD, one of the world’s first 96-layer 3D TLC-based NVMe drives aimed at commercial and industrial environments. And with sequential read speeds of up to 3400 MB/s, the drive is among the fastest in the segment.

When it comes to SSDs for applications that work 24/7 and/or in harsh environments, predictability and reliability are two things that matter the most, so the devices use appropriate components, are tailored for a particular use case, and have to pass rigorous tests. Transcend’s MTE662T M.2-2280 SSD is designed for embedded or ‘mild’ industrial applications, so it can handle operating temperatures between 0ºC and 70ºC for prolonged periods, can survive 5% ~ 95% RH non-condensing humidity, and endure 2.17 G (peak to peak) vibration with a 10 Hz ~ 700 Hz frequency.

The Transcend MTE662T carries 256 GB, 512 GB or 1 TB of 96-layer 3D TLC BiCS4 memory from Toshiba. The SSD is controlled by by an undisclosed high-end controller with eight NAND channels that supports NVMe 1.3 feature set, an LDPC-based ECC as well as DRAM caching. As far as performance is concerned, the drive promises up to 3400 MB/s sequential read speeds, up to 2300 MB/s sequential write speeds (when pSLC cache is used), as well as a peak read/write random IOPS rating of 340K/355K.

When it comes to endurance and reliability levels, Transcend’s MTE662T SSDs can handle from 550 TB to 2,200 TB written over a three-year warranty period, depending on the drive's capacity. This is not a particularly high rating, but far not all embedded and commercial applications are write intensive. As for MTBF, Transcend has rated the drive for 3,000,000 hours.

Transcend will start sales of the MTE662T SSD in February. Exact prices will depend on the volume ordered and other factors.