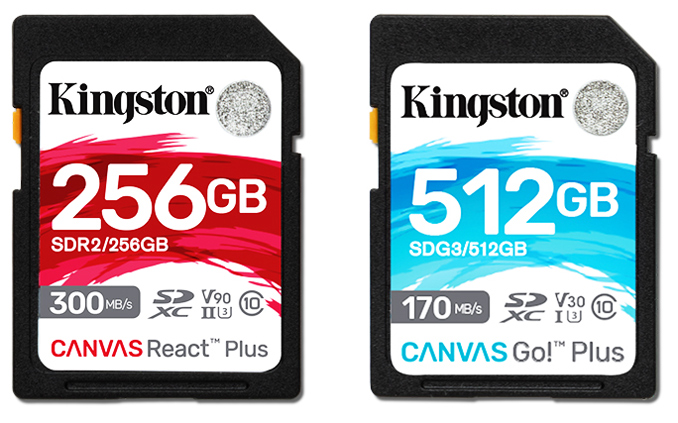 Kingston has introduced several new high-performance Secure Digital memory cards at CES 2020, as well as new card readers. This time around the company decided to focus on SD cards designed for performance demanding users, so the lineup includes UHS-I DDR-200 as well as UHS-II devices.

Kingston’s Canvas React Plus memory cards with a UHS-II interface are rated for up to 300 MB/s sequential read speeds and are set to be available in 128 GB, 256 GB, and 512 GB configurations. The Canvas React Plus UHS-II cards are also compliant with Video Speed Class V90 specification, which mandates a minimum write speed of 90 MB/s to allow recording of Ultra-HD and 360° video. Traditionally for UHS-II cards, they can work with UHS-I hosts, but to show their full performance potential they require a UHS-II host that uses extra pins on the cards.

The UHS-II interface enables data transfer rates of up to 312 MB/s, and was first introduced as a part of the Secure Digital 4.0 specification back in mid-2011. Partly because UHS-II requires additional pins (and redesigned hosts), as well as for some other reasons, the technology has not really taken off on the mass market just yet. To date, only a handful of companies have introduced their SD cards with a UHS-II interface and now Kingston is one of them.

Another interesting introduction of Kingston is its Canvas Go! Plus family of SD cards featuring a UHS-I interface that supports a sequential read speed of up to 170 MB/s courtesy of a DDR-200 transfer rate. Also, the card also carries the V30 badge, indicating support for a minimum write speed of 30 MB/s. One thing to note is that DDR-200 is not covered by the UHS-I specification and officially the UHS-I bus only supports up to 104 MB/s throughput. Meanwhile, SanDisk/Western Digital have offered UHS-I cards along with card readers that support a DDR-200 operation for years. As it turns out, Kingston has decided to join the UHS-I/DDR-200 club to compete head-to-head against its rival.

Along with its new cards, Kingston introduced its latest MobileLite Plus readers designed to support the maximum speeds that the new devices have to offer.

Kingston did not reveal when it plans to make its new Canvas React Plus and Canvas Go! Plus cards as well as MobileLite Plus readers available, but it is reasonable to expect them to hit the market this year.