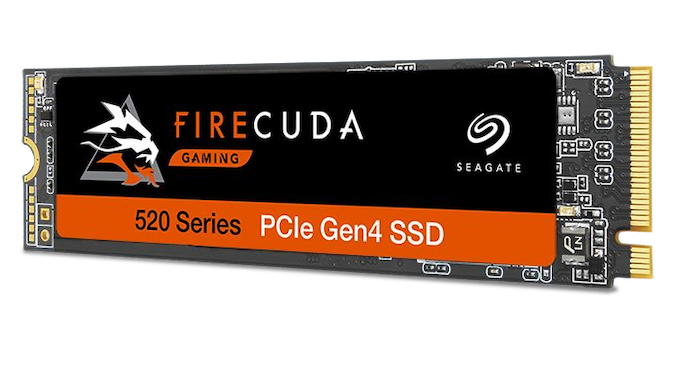 Seagate is refreshing their consumer SSD lineup with 96-layer 3D NAND, and introducing a new flagship model: the FireCuda 520, Seagate's first PCIe 4.0 SSD. As with every other consumer PCIe 4.0 SSD so far, the Seagate FireCuda 520 uses the Phison E16 controller. The FireCuda 520 arrives several months after the first Phison E16-based SSDs, and Seagate has used the time to refine the product a bit. They haven't made any firmware tweaks that affect performance, but the FireCuda 520 does use a Seagate-specific firmware variant that includes some extra security measures to protect against firmware hacks, and it's been through some extra QA.

In terms of hardware, the FireCuda 520 is a pretty standard Phison E16 reference design using Toshiba/Kioxia BiCS4 96-layer 3D TLC NAND flash memory. The drive uses a two-sided black PCB with no heatspreader or heatsink included, since most new motherboards are providing their own M.2 cooling solution. Seagate rates the FireCuda for up to a generous one drive write per day for the five-year warranty period. MSRPs for the FireCuda 520 match its status as a flagship drive, and are almost twice the street prices for the cheapest PCIe 3.0-based NVMe SSDs.

The rest of Seagate's consumer SSD lineup is also being updated. Their PCIe 3.0 SSD lineup was split evenly between the single-sided BarraCuda 510 (256GB and 512GB) and the double-sided FireCuda 510 (1TB and 2TB). Both models are sticking around under the same names,  getting upgraded from 64L to 96L TLC while keeping the same Phison E12 controller. The new editions will also overlap in capacities: the BarraCuda 510 is gaining a 1TB model, and the FireCuda 510 is gaining a 500GB model. The FireCuda 510 is also switching from a blue to black PCB.

Seagate's BarraCuda SATA SSD is getting a more sensible update, gaining a new model designation (BarraCuda 120) to go with the new NAND.

Seagate has already started shipping the new SSDs to retailers, and product listings are already popping up on online retailer websites.