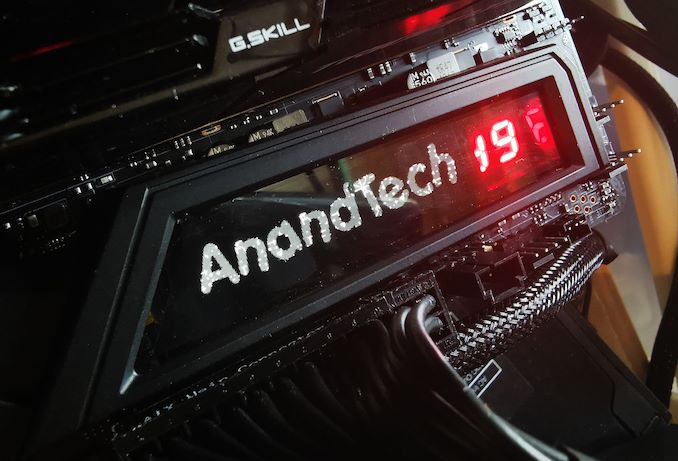 With the introduction of AMD's X570 chipset, motherboard vendors have upped its game in the premium stakes with a variety of premium mid-range and high-end models. The MEG X570 Godlike is MSI's flagship model and is heavily geared towards gamers and enthusiasts. The premium controller set of the X570 Godlike is spearheaded by Killer Networking: with dual on-board ports, Wi-Fi 6 802.11ax connectivity, and a 10 G Super LAN add-on card in the accessories bundle. Also on offer is up to five PCIe 4.0 x4 M.2 slots, two of which come from an Xpander-Z Gen4 add-on card, and a pair of Realtek ALC1220 HD audio codecs which makes this one of the most feature-rich models on the X570 chipset. 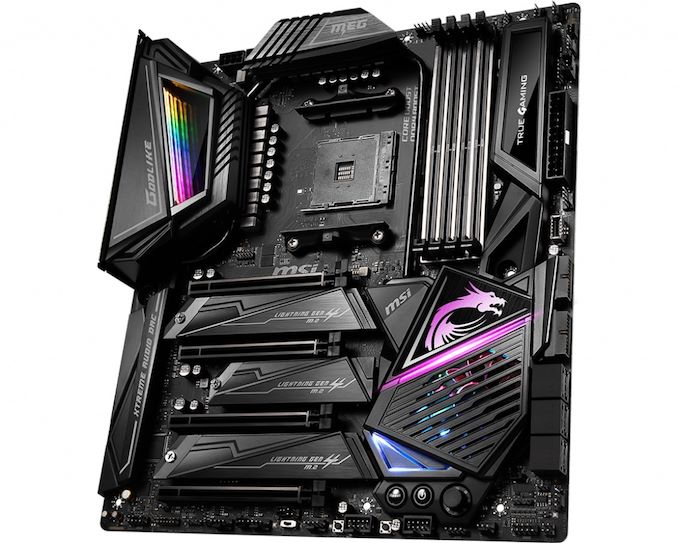 The MEG X570 Godlike is MSI's current flagship in its X570 line-up and represents its enthusiast gaming MEG series. Building on a similar design as the MSI MEG X570 Ace, which we have already reviewed, the X570 Godlike includes plenty of RGB options with an Infinity Mirror 2 on the rear panel cover, as well as RGB LEDs integrated into the actively cooled X570 chipset heatsink. An interesting design aspect is the customizable OLED panel to the right of the four memory slots which allows users to upload their own GIFs and animations. 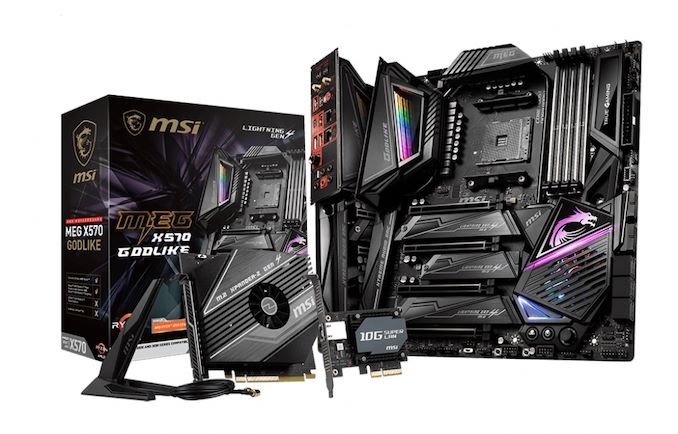 There are three PCIe 4.0 x4 M.2 slots onboard with three individual M.2 heatshields, while the accessories bundle includes an M.2 Xpander-Z Gen4 PCIe 4.0 addon card which adds an additional two PCIe 4.0 x4 M.2 slots. Also included are six SATA ports with support for RAID 0, 1, and 10 arrays, while the four memory slots have support for DDR4-4800 and a total capacity of up to 128 GB.

As this is a flagship aimed at enthusiasts looking to push the Ryzen 3000 processors to its limits, cooling is important and there are a total of nine 4-pin fan headers featured around the edge of the board which are split into a single header for a CPU fan, one for a water pump, and seven for chassis fans. 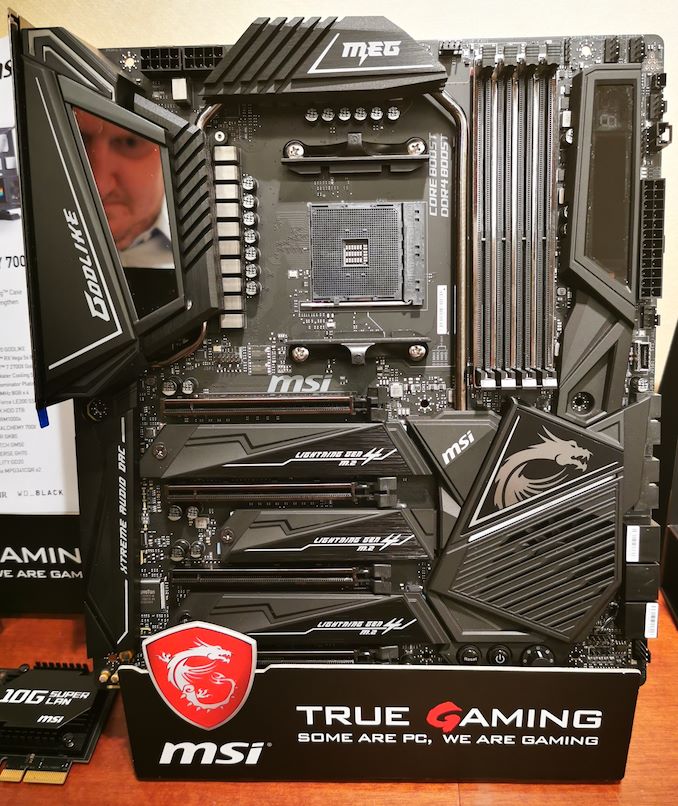 Another enthusiast-level feature is a solid 14+4 phase power delivery controlled by an International Rectifier IR35201 PWM controller which operates in a 7+1 configuration. The 14-phase CPU VCore section is running with 7 x IR3599 doublers, while the 4-phase SoC section is running off a single IR3599 which splits the signal into four. This is a very capable setup with its use quality 70 A power stages throughout both sections and has already been tested on sub-zero cooling methods to great effect by some extreme overclockers. Cooling this mammoth power delivery is two large aluminium heatsinks which are interconnected by a heat pipe which also connects it to the X570 chipset heatsink.

Along the bottom of the PCB is an overclockers toolkit which consists of a reset and power switch, a Game Boost overclocking profile preset dial, a pair of small buttons which allows users to overclock or downclock the base-clock in increments of 1 MHz, while a dual BIOS switch allows users to flick between two different BIOS versions; perhaps one could be set up for extreme overclocking.

MSI has included two Ethernet ports on the rear panel controlled by a Killer E3000 2.5Gbit and Killer E2600 1Gbit NIC pairing. Offering Wireless and BT 5.0 connectivity is a Killer AX1650 Wi-Fi 6 802.11ax wireless interface. Also included in the accessories bundle is an Aquantia AQC107 10 G Super Lan PCIe add-on card. Also included on the rear panel is USB 3.1 G2 connectivity with three G2 Type-A and a single Type-C G2 port, with a further two USB 3.1 G1 Type-A ports. MSI has also kitted out the MEG X570 Godlike with an impressive onboard audio solution with two Realtek ALC1220 HD audio codecs, one for the rear panel connectors, and one for the front panel. Another inclusion is an ESS 9018 Sabre DAC which powers the 6.3 mm headphone port on the rear panel. There's also a front-panel USB 3.1 G2 Type-C header, with two USB 2.0 headers which provide a total of four ports. 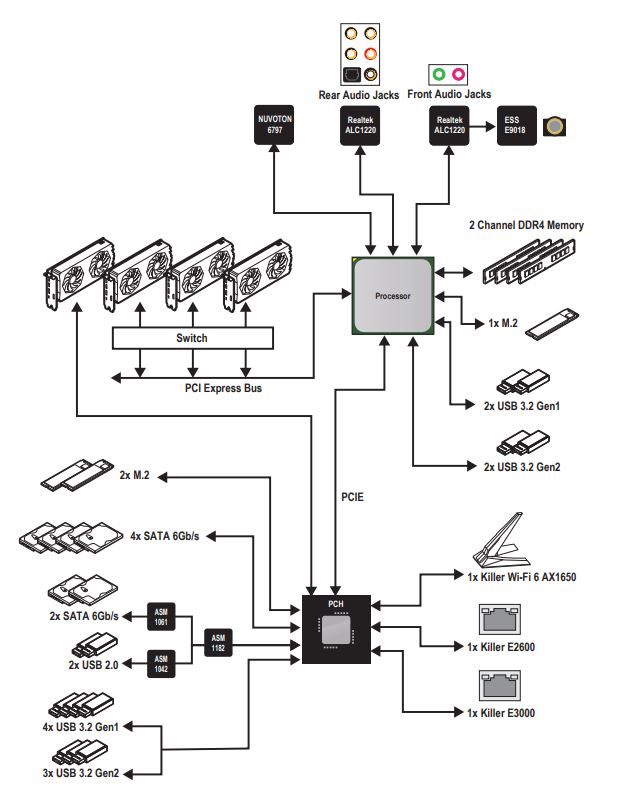 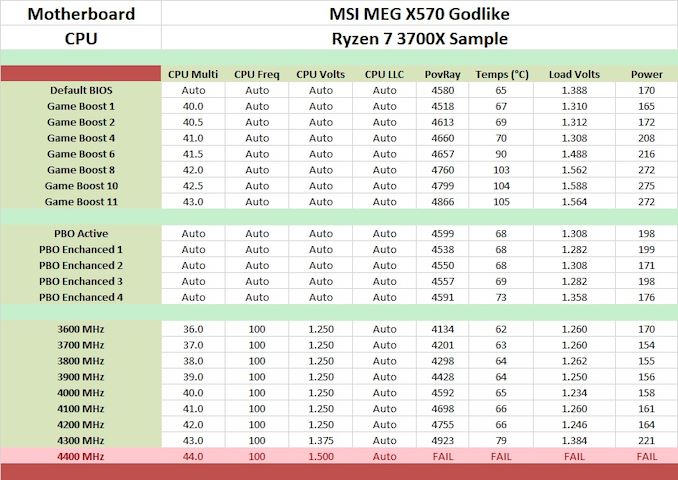 Early revisions of MSI's firmware on X570 hasn't been favorable for users looking to use the Game Boost profiles with some very questionable setting configurations; mainly too much CPU VCore which in turn, increases the heat output to dangerous levels. We have spoken to MSI and this is something they intend to fix with its next firmware update. When manually overclocking, we managed to squeeze out 4.3 GHz with a CPU VCore of 1.375; this is the brick wall for our Ryzen 7 3700X chip, and the MSI MEG X570 Godlike managed this comfortably. The performance in POV-Ray wasn't throttled as we went up each 100 MHz frequency step, and it should be noted that when overclocking on MSI's X570 models, performance isn't throttled after a certain temperature; instead, the system will shut down once CPU temperatures rise to 110ºC

The MSI MEG X570 Godlike as its name would suggest is the premier model in its line-up and as a result, is feature-laden. From its triple Killer Networking controller set, a triple-header of audio controllers, the scope for up to five PCIe 4.0 x4 M.2 slots (three onboard, two add-on), and a solid-looking 14+4 phase power delivery, the Godlike looks to be one the most comprehensive X570 motherboards on the market. Its main competition comes from the GIGABYTE X570 Aorus Xtreme ($700) and the ASUS ROG Crosshair VIII Formula ($700); both of those models also come with unique features, but the MSI MEG X570 Godlike ($700) does have four full-length PCIe 4.0 slots, capability for up to five PCIe 4.0 x4 M.2 drives out of the box, and also has plenty to offer users in aesthetics with the Mystic Light Infinity Mirror 2, and the customizable OLED panel.