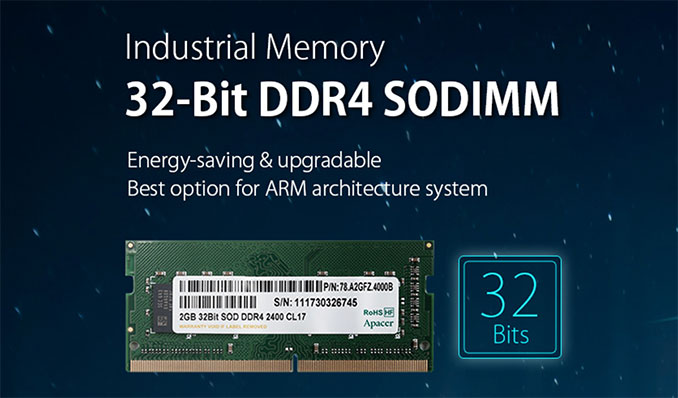 Apacer has announced a lineup of 32-bit SO-DIMMs designed for systems based on processors featuring Arm, RISC, or RISC-V architectures. The memory modules will enable SoC developers to take advantage of capacity and performance flexibility offered by modular memory solutions.

Memory organization is a bit different between x86 and Arm/RISC-V based systems. The former typically feature one or more 64-bit memory interfaces to connect one or more 64-bit memory modules (or just a set of DRAM chips) in a bid to maximize raw memory bandwidth and capacity. By contrast, Arm or RISC-V powered SoCs use one or more 16-bit memory interfaces for granularity, power, and efficiency (to maximize channel utilization and effective memory bandwidth) reasons. Since the vast majority of Arm or RISC-V based systems are either mobile or special purpose, most of the memory subsystems are custom-designed with only a handful of SoCs featuring “wide” memory interfaces. As a result, most of them cannot use industry-standard 64-bit DIMMs and rely on soldered down memory. 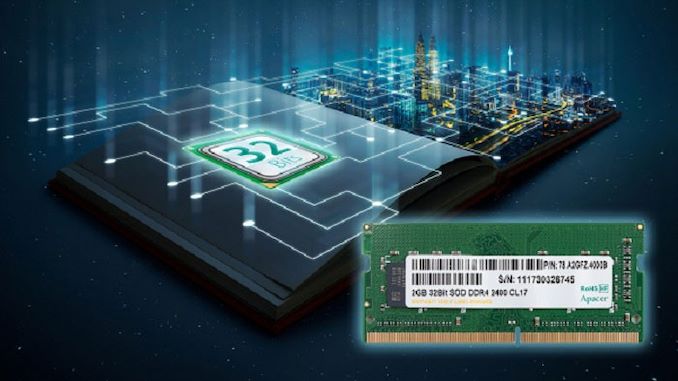 The situation is changing with release of Arm-powered server processors, but many of emerging applications still do not need 64 or 128-bit DRAM subsystems, but could take advantage of flexibility that memory modules provide in general. Apacer has offered 32-bit DDR2 and DDR3 modules for such devices for years and is now addressing this need with its new 32-bit DDR4 SO-DIMMs.

By using modules instead of soldered-down memory subsystems, developers of applications running processors featuring Arm, RISC, or RISC-V architectures will be able to save PCB space, provide manufacturing flexibility, and ensure DRAM upgradeability of their products.

The family of Apacer’s 32-bit memory modules includes 2 GB, 4 GB, and 8 GB SO-DIMMs operating at DDR4-2133, DDR4-2400, and DDR4-2667 speed bins at 1.2 Volts. The modules are based on various DRAM chips supporting industrial-grade wide-temperature ranges, so they can power a variety of applications. Apacer says that its 32-bit SO-DIMMs are compatible with Arm-based SoCs by NXP, Freescale, Marvell, Cavium, and Texas Instruments as well as “the latest RISC-V 32-bit processors.” Meanwhile, considering the fact that the modules are 32-bit wide, it is not guaranteed that they will work with all SoCs. Given the relatively limited market for such SO-DIMMs, expect them to be priced accordingly. 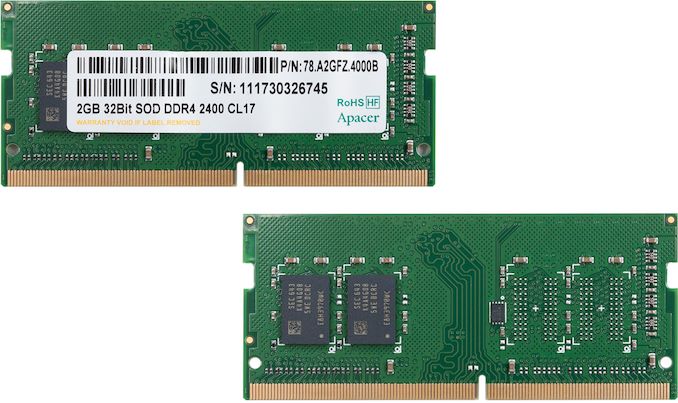 Apacer did not say when to expect the modules to become available and how exactly it plans to market them (to enable end-user upgradeability), but the products are already listed at the company’s website, so expect the first customers to get their 32-bit DDR4 SO-DIMMs shortly.