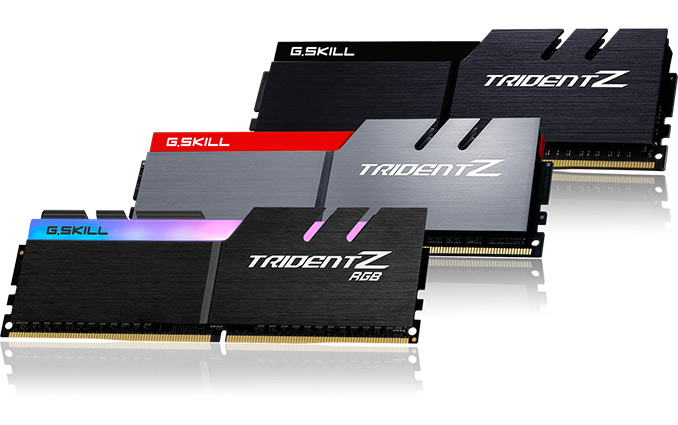 Getting right down to business, the fact that G.Skill even announced memory kits specifically for Coffee Lake got an eyebrow raise out of us. At first blush, it seemed like a marketing stunt, especially since they're using the same Samsung’s B-die chips that they've been using for some time now. But according to the company, Coffee Lake's memory controller behaves ever so slightly differently than Kaby Lake's when overclocked, necessitating the new modules.

Sure enough then, if we compare G.Skill's DDR4-4200 and DDR-4600 modules for the new Coffee Lake/Z370 and the Kaby Lake-X/X299 platforms, we will notice that the modules for Coffee Lake have looser tRAS sub-timings than the modules for Kaby Lake. From performance point of view, tRAS might not be a big deal, but it's an unexpected change; if anything we would have expected Coffee Lake to accept the same timings as Kaby Lake. There are a few possible reasons for this difference - not the least of which is the immature Z370 platform - however the more interesting options are that it's a product of the new manufacturing process, or possibly even a new memory controller entirely (especially seeing as how Coffee Lake doesn't support DDR3).

Otherwise, G.Skill's tinkering only seems to have been necessary for their fastest modules, as their lower-clocked enthusiast-class memory sticks are unchanged from earlier revisions. Conversely, since G.Skill has just loosened the timings of their new high-speed DIMMs, they should continue to work fine in other platforms.

Overall, G.Skill’s lineup of Coffee Lake-optimized DRAM kits consists of seven products featuring two or four 8 GB or 16 GB modules based on Samsung’s B-die chips. The rather broad family of Coffee Lake-optimized memory products is aimed at different classes of systems. The fastest DDR4-4400/4500/4600 DIMMs are only available in 8GB capacities and require 1.4 V, 1.45 V or even 1.5 V. G.Skill positions these modules for enthusiasts seeking maximum performance and not interested in maximizing DRAM content per box. G.Skill’s ‘mid-range’ kits for Coffee Lake run at DDR4-4000/4200, have 32 GB of capacity (16 GB DIMMs), and are designed for those who need high memory bandwidth along with a decent amount of RAM. Finally, there is a 64 GB DDR4-3733 kit for users who run memory-intensive applications.

Finally, G.Skill plans to start selling the new Coffee Lake-optimized Trident Z and Trident Z RGB memory kits in November with the fastest Trident Z RGB DDR4-4266 arriving in December. The company traditionally does not touch upon MSRPs of its products in its announcements because DRAM prices tend to fluctuate. Meanwhile, since we are dealing with the latest products for a premium platform, expect appropriate prices.