Samsung Shows Off SM961 and PM961 SSDs: OEM Drives Get a Boost 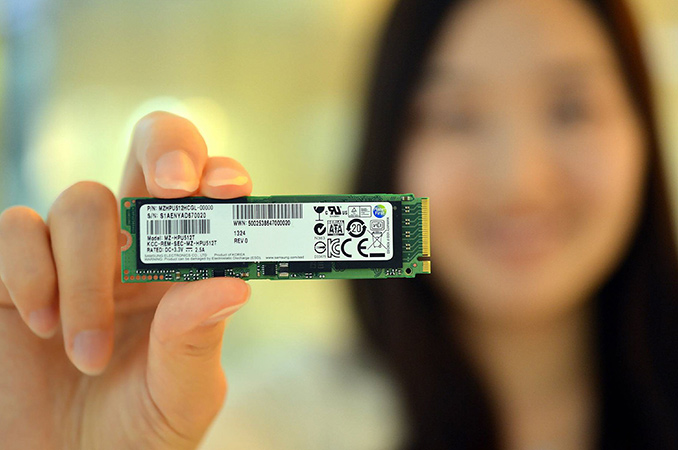 At Samsung's annual SSD Forum Japan, the company has demonstrated two previously-unannounced high-performance client SSDs. The new SM961 and the PM961 drives are based on the company’s Polaris controller as well as V-NAND flash memory. Samsung promises that the SSDs will increase sequential read speeds to 3000 – 3200 MB/s and will also significantly boost random read and write performance. The drives are projected to ship inside PCs in the second half of the year, while it's anyone's guess if and when these will filter into retail (ala the 950 series).

Samsung is the world’s largest producer of NAND flash memory and SSDs. Moreover, it is also one of the companies, which raise the bar of SSD performance and feature-set. In the recent years, Samsung has been an instrumental driving force in popularization of PCIe and NVMe SSDs. Samsung’s XP941 was one of the first high-end PCIe M.2 SSDs aimed at OEMs and it greatly helped to promote the form-factor among PC makers in 2014. The SM951 SSDs significantly increased performance of flash storage sub-systems compared to its predecessor and introduced NVMe to numerous OEMs a year later. In fall 2015, the Samsung 950 Pro finally brought NVMe and performance of the SM951 to retail market.

When introduced, the XP941 and the SM951 were for their respective times Samsung’s top-of-the-range SSDs designed for OEMs and their flagship PCs. Last year, the company decided to alter its strategy regarding high-performance SSDs aimed at PC makers. Instead of offering just one lineup of fast PCIe drives, Samsung introduced its second family of advanced SSDs with lower price and TLC NAND — the PM951. While the latter drives were still rather fast, the price/performance trade-off meant that they were considerably behind the SM951 in terms of sequential read and write speeds. This year, the company plans to change its approach to OEM SSDs once again. Samsung will offer two product families with slightly different characteristics: the SM961 and the PM961. The new lineups will further raise performance bar of Samsung's SSDs, but the PM961 is expected to make the new speed levels accessible to a broader audience. The tactics should help Samsung to increase its share of the premium SSD market.

Samsung SM961 and PM961: First to Use Polaris Controller

The new OEM SSD lineups from Samsung will be the company’s first standard high-end SSDs for PC makers, which use 3D/V-NAND memory. The new drives rely on the all-new Polaris platform and will come in M.2-2280 form-factor with PCIe 3.0 x4 interface while utilizing the NVMe protocol. Right now, the company is not revealing too many details about its new SSDs. For example, it is unknown whether they rely on Samsung’s third-gen 48-layer V-NAND or its second-gen 32-layer V-NAND. While using newer memory for new SSDs is logical, so far Samsung has not confirmed anything. 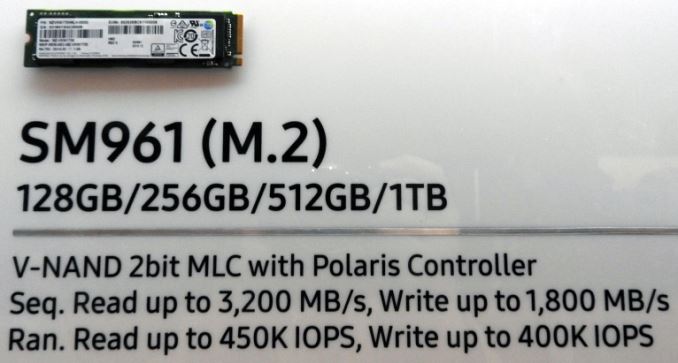 The Samsung SM961 will be Samsung’s new top-of-the-range M.2 SSD line for OEMs, which will be offered in 128 GB, 256 GB, 512 GB and 1 TB configurations (by contrast, the SM951 family did not include a 1 TB option). The drive will be based on Samsung’s MLC V-NAND as well as the company’s Polaris controller. Samsung is specing the SM961 at up to 3200 MB/s for sequential reads and up to 1800 MB/s for sequential writes, but does not specify which models will boast with such numbers. The new SSDs can perform up to 450K random read IOPS as well as up to 400K random write IOPS, which looks more like performance of server-grade SSDs. 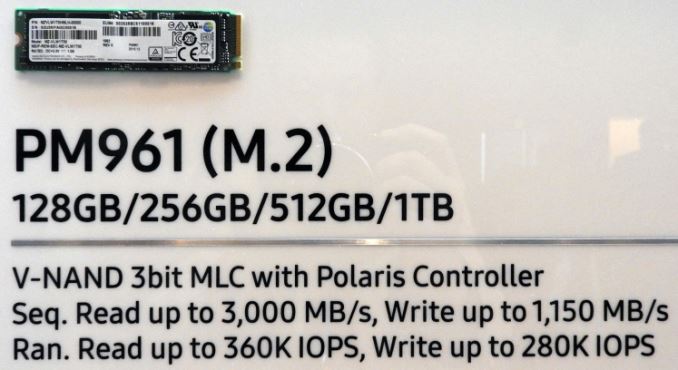 The Samsung PM961 will be based on the company’s TLC V-NAND flash and the Polaris controller. The PM961 lineup will consist of four models: with 128 GB, 256 GB, 512 GB and 1 TB capacities (the PM951 also did not include a 1 TB model). The PM961 SSD supports sequential read speeds of up to 3000 MB/s as well as sequential write speeds of up to 1150 MB/s. Random read/write performance of the PM961 is up to 360K/280K of read/write IOPS, but Samsung does not specify exact models that offer such performance.

The PM961 should be more affordable than the SM961, but even with the use of TLC, according to Samsung's specifications it should be only slightly slower than the flagship model when it comes to sequential read speeds (6% difference is negligible). Sequential write speeds should be lower compared to those offered by the SM951 and the 950 Pro, but should still be considerably higher than sequential write speed of its direct predecessor, the PM951. Moreover, the new PM961 should also be considerably faster in random read and write operations versus its ancestors, according to specifications released by Samsung.

It remains to be seen how the PM961 drive will behave in real-world applications versus enthusiast-class PCIe SSDs from other manufacturers. But its 3000 MB/s sequential read performance as well as very high random reads and writes should probably play positive roles here.

Samsung has not formally introduced the SM961 and the PM961 SSDs, but PC Watch reports that the company expects computer makers to use the new drives in the second half of the year. Moreover, since the SSDs demonstrated at the event already feature actual labels with all the certification stamps and even serial numbers, it looks like development of the storage devices is very close to its completion.

Initially, Samsung will use its Polaris platform only for the drives intended for OEMs, but it is plausible to expect the company to utilize the same controllers for its retail SSDs eventually. As is usually the case, Samsung isn't commenting on whether we'll see retail Polaris drives in the future, though if 950 Pro is anything to go by, we wouldn't be surprised. Nonetheless, keeping in mind how easy is to get both SM951 and PM951 SSDs from stores like Amazon and RamCity, it should not be a problem to obtain these new OEM SSDs from online stores as well.

Looking Ahead: PCIe 3.0 x4 May Become a New Performance Limiting Factor for SSDs

Looking at Samsung's specifications, it's interesting to note that the 3200 MB/s sequential read speed of the Samsung SM961 is very close to actual maximum bandwidth of the PCIe 3.0 x4 bus. A PCIe 3.0 connection supports transfer rates of 8 GT/s (GigaTransfers per second) per lane, for a total of 3.94 GB/sec for an x4 connection after factoring in overhead. As it appears, the bandwidth offered by four lanes of PCIe 3.0 - the maximum bus width supported by the M.2 standard - is close to being saturated by high-end client SSDs.

If this ends up being the case, then the SM961 may be Samsung’s fastest sequential transfer SSD for client PC applications for quite a while (i.e., until PCIe 4.0 arrives). Consequently, if the company plans to introduce its successors with the same PCIe 3.0 interface, it will have to improve other domains of SSD performance (e.g., performance in mixed workloads, endurance, power efficiency, etc.). Keeping in mind that Samsung’s retail 950 Pro SSDs were a little faster than the company’s SM951 despite using the same controller, it will be interesting to see how Samsung might differentiate its hypothetical enthusiast-oriented Polaris and MLC V-NAND-based SSD from its OEM offering (if such SSD is in the company’s plans at all, of course).

With that said, while certain Samsung’s SSDs may eventually hit a sequential transfer performance barrier in the form of PCIe 3.0 x4 bus, the bandwidth provided by this interface will still be enough for the vast majority of SSDs from different manufacturers going forward. Moreover, since real-world performance does not entirely depend on just sequential read or write speeds, there are a plenty of ways to improve performance of actual drives in real-world applications.