NZXT Phantom 820 Case Review: Everything, Everything

In and Around the NZXT Phantom 820

Many of the NZXT cases I've tested have had aesthetics that floated in the neighborhood of chintzy or slightly gaudy—these are geared chiefly towards gamers after all—but the part of my reptile brain that appreciates the styling of Alienware's machines is attracted to the design employed in the Phantom 820. Gunmetal gray is an underappreciated color (see Antec's P182) that makes for an appealing change from the straight blacks and silvers we typically see in cases. The interesting thing about the Phantom 820 is that the more ostentatious aspects of the original Phantom 810's design seem to have been toned down, and the look as a whole seems to gel better. Maybe it's that gunmetal finish, but I don't immediately think of an Imperial Stormtrooper when I look at the 820. 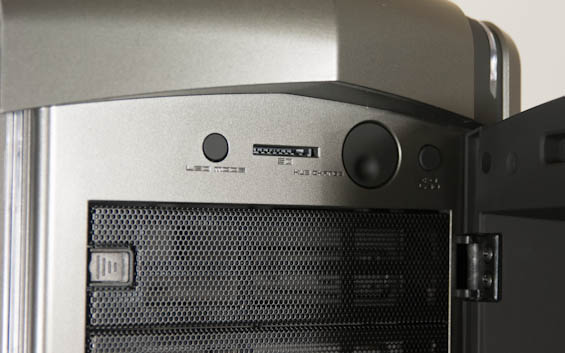 The front of the Phantom 820 maintains the triangular motif that's become a hallmark of many of NZXT's higher end cases (again, like the original Phantom 810 and the Switch 810), using black ventilation grills as an accent. The magnetically sealed door hides four 5.25" bays along with the SD card reader and LED controls and swings out to the right; it's framed by an LED accent line on the left. At the bottom is a removable fan filter that also includes a small tray if you opt to use the fan mounts in the floor of the case.

Moving to the top, there are an impressive six USB ports: two USB 3.0 and four USB 2.0. On the opposite side is the quad-channel fan controller along with the power and reset buttons and the audio jacks. Most of the top of the case is vented in some fashion, and you can see the substantial 200mm exhaust fan at the rear. 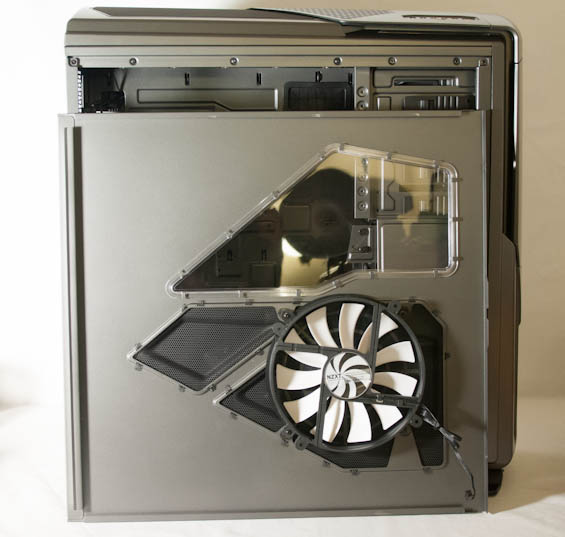 The 820's side panels are where I get a little bit antsier. I appreciate the way the panel on the right side, behind the motherboard tray, has an extrusion to increase space for routing cabling (and it worked beautifully), but I actually have reservations about the window and ventilation on the left side panel. I've generally been a proponent of side intake fans, but some of our readers have correctly pointed out that a side intake and the accompanying grill also gives sound another vector to escape. NZXT pretty much has to bank on the cooling performance of the 820 to keep noise in check. I also think the window and grill design is on the gaudier side and probably the least appealing aspect of the 820's look.

The exterior of the 820 is mostly bog standard. It's evident there's a healthy amount of space behind the motherboard tray, and I like that NZXT again included the adjustable exhaust fan mount to allow users to line up the exhaust with the CPU's tower cooler. There are also the traditional four rubber routing holes, along with a removable fan filter for the PSU bay. 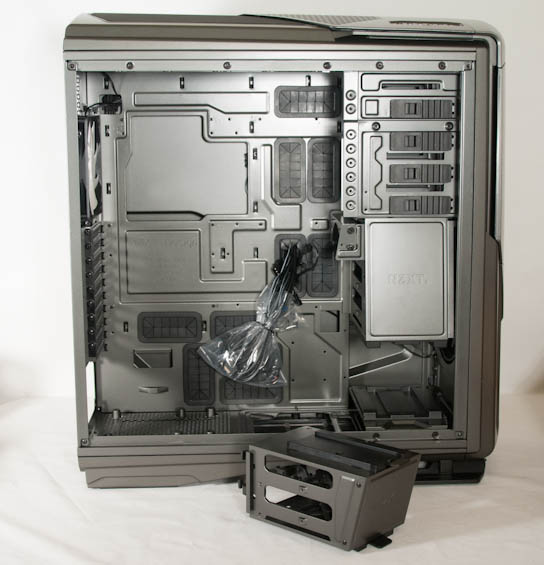 When you pop the side panels off (secured by three thumbscrews each), things are mostly the usual but NZXT has added a few wrinkles here and there. You'll notice a substantial number of cable routing holes in the motherboard tray, some much appreciated headroom above the motherboard mounts, a large bundle of cables, and oddly enough, two drive cages (the bottom one is removable) that actually require you to insert the drives behind the tray instead of on the open side. This is contrary to conventional wisdom, but a minor nuisance.

By and large I'm fond of how the NZXT Phantom 820 is built. This is a heavy case and the materials used all feel very sturdy. I think the aesthetic is just this side of being too ostentatious, but for an enthusiast-geared case I think it's light years ahead of the Thermaltake Level 10 GT in terms of looks.