NZXT Phantom 820 Case Review: Everything, Everything

Apart from just how heavy the NZXT Phantom 820 is, assembly actually goes fairly smoothly. In keeping with that premium feel they're going for, building inside it is mostly geared towards ease of use, and the out of the box experience is a pleasant one. Of particular note is the box of screws that NZXT includes, which already has them all neatly organized. Lian Li includes a screw keeper with many of their high end cases, but it's not organized and the one for the PC-A76X wasn't actually big enough to hold all the screws that came with the case.

It's not worth boring you with the details; suffice to say installing the motherboard and optical drive went off basically without a hitch, same with the expansion card (expansion slot shields are ventilated and held in place with thumbscrews) and the power supply. Having all of the screws conveniently in one place and organized made things go that much more swimmingly.

Where NZXT went off the rails a bit is, ironically, with the 2.5"/3.5" drive sleds. NZXT's promotional material talks about how these have been radically redesigned, but the funny thing is that they're just too flimsy. I found it was particularly difficult to keep the sled with the 2.5" drive screwed to the bottom in place, as it was easy to push too far into the drive cage. I also think it's unusual that they have to be installed on the side behind the motherboard tray instead of in front of it, and there doesn't seem to be any real reason as to why the case was designed this way. 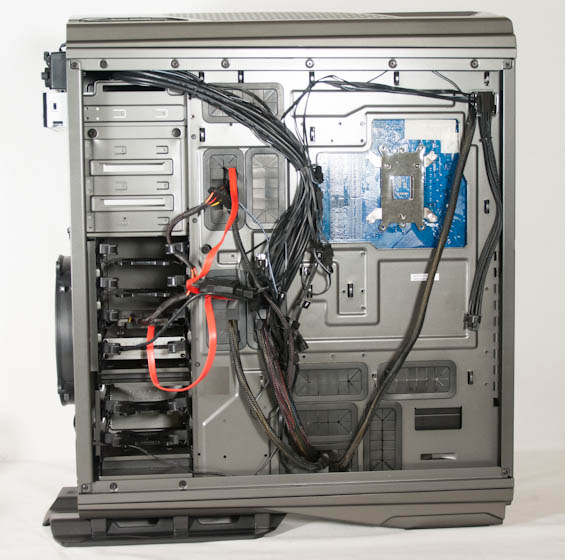 Routing power and data cables goes smoothly, and NZXT even includes an extension cable for the AUX 12V line, but what's amusing is how much of a mess all the cabling for the integrated peripherals of the Phantom 820 actually is. I don't think it can really be helped, but it's awfully hard to sort some of it out. NZXT does the best they can with a bad situation by at least labeling which channel each of the fan leads connects to and pre-connects the existing fans (outside of the side intake), but honestly it's just cable spaghetti and I'm not really sure how much more they could've done to mitigate it. Added features breed added complexity. It's worth noting that NZXT does give a healthy amount of lead for the side intake fan's power cable. 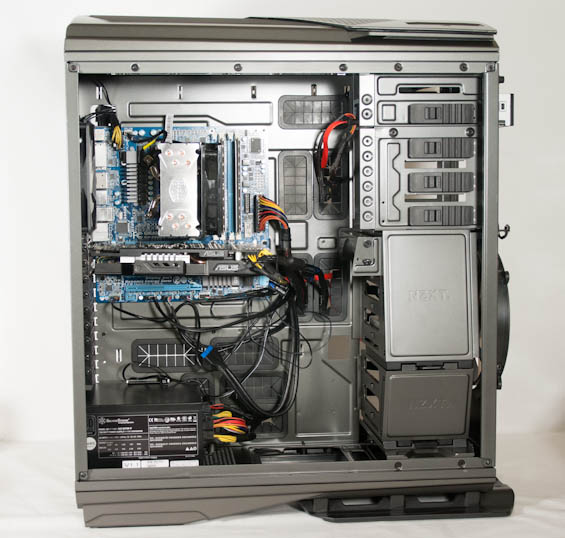 Ignoring the fact that I'm a tiny man and the Phantom 820 is a heavy case, assembling our testbed inside it was easy enough, a process made much easier by the sorted screw keeper. I do think the drive cages and trays need to be redesigned and brought a bit more in line with contemporary designs similar to what Antec and Corsair are doing; it seems like NZXT may have erred on the side of aesthetics when they should've gone for practicality. The aforementioned mess of cables can also be difficult to cope with but again, I don't really know if they could've done much more to mitigate it, and it's worth the added complexity for the robust fan controller.