No, it’s not the new Indilinx JetStream controller - that’ll be in the second half of the year at the earliest. And it’s definitely not Intel’s 3rd generation X25-M, we won’t see that until Q4. The SSD I posted a teaser of last week is a modified version of OCZ’s Agility 2.

The modification? Instead of around 28% of the drive’s NAND set aside as spare area, this version of the Agility 2 has 13%. You get more capacity to store data, at the expense of potentially lower performance. How much lower? That’s exactly what I’ve spent the past several days trying to find out.

The drive looks just like a standard Agility 2. OCZ often makes special runs of drives for testing with no official labels or markings, in fact that's what my first SandForce drive came as late last year. Internally the drive looks identical to the Agility 2 we reviewed not too long ago. 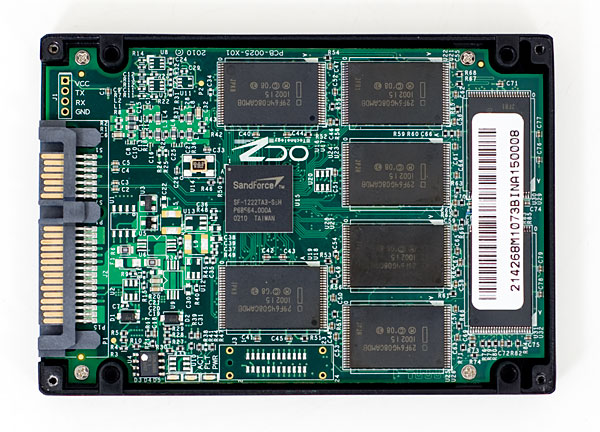 OCZ lists the firmware as 1.01 compared to the standard 1.0 firmware on the shipping Agility 2. The only difference I'm aware of is the amount of NAND set aside as spare area.

When you write data to a SandForce drive the controller attempts to represent the data you’re writing with fewer bits. What’s stored isn’t your exact data, but a smaller representation of it plus a hash or index so that you can recover the original data. This results in potentially lower write amplification, but greater reliance on the controller and firmware.

SandForce stores some amount of redundant information in order to deal with decreasing reliability of smaller geometry NAND. The redundant data and index/hash of the actual data being written are stored in the drive’s spare area.

While most consumer SSDs dedicate around 7% of their total capacity to spare area, SandForce’s drives have required ~28% until now. As I mentioned at the end of last year however, SandForce would be bringing a more consumer focused firmware to market after the SF-1200 with only 13% over provisioning. That’s what’s loaded on the drive OCZ sent me late last week.

When Does Spare Area Matter?

In addition to the SandForce-specific uses of spare area, all SSDs use it for three purposes: 1) read-modify-writes, 2) wear leveling and 3) bad block replacement.

If a SSD is running out of open pages and a block full of invalid data needs to be cleaned, its valid contents is copied to a new block allocated from the spare area and the two blocks swap positions. The old block is cleaned and tossed into the spare area pool and formerly spare block is now put into regular use.

The spare area is also used for wear leveling. NAND blocks in the spare area are constantly being moved in and out of user space to make sure that all parts of the drive wear evenly.

And finally, if a block does wear out (either expectedly or unexpectedly), its replacement comes from the spare area.