The GIGABYTE Z390 Aorus Pro WIFI positions itself in a highly contested price bracket at $200 and looks to stand out as one of the most unique styled ATX sized Z390 motherboards. It has stiff competition from models such as the ASRock Z390 Phantom Gaming 6 ($196), the ASUS ROG Strix Z390-H Gaming ($190) and the MSI MPG Z390 Gaming Pro Carbon ($200). 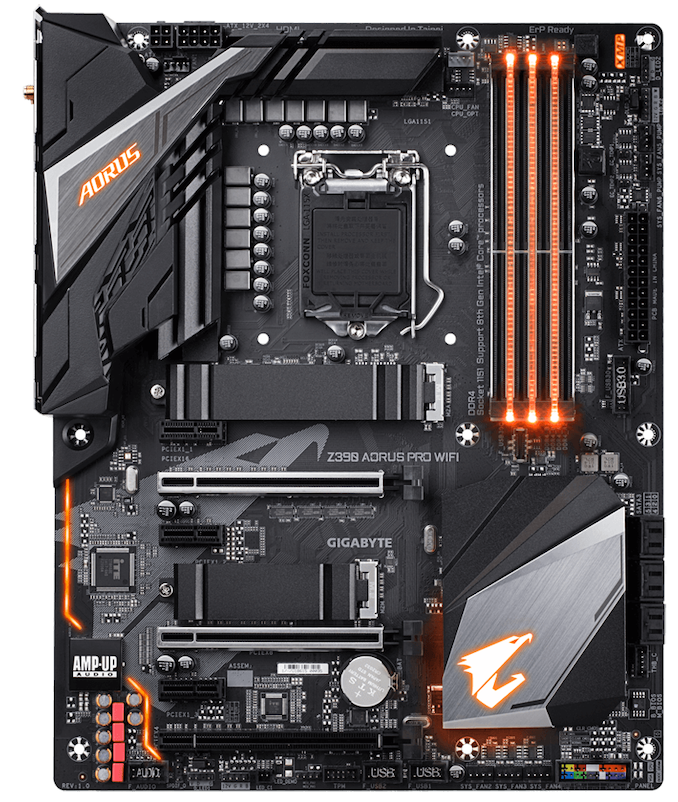 Nestled onto a fully black PCB is a nicely contrasting Aorus Falcon logo coming from the bottom left and the GIGABYTE Z390 Aorus Pro WIFI uses a black and silver heatsinks with a black glossy plastic rear panel cover. An Aorus Falcon is subtly carved into the chipset heatsink which doubles up as one of the customizable RGB LED zones along with others in the audio PCB separation line, the Aorus logo in the rear panel cover and in-between the RAM slots. Users looking to expand upon this can do so via the two 5050 RGB and two addressable RGB headers. For the price, the GIGABYTE Z390 Aorus Pro WIFI offers eight 4-pin headers which cement it as one of the most comprehensive Z390 boards for cooling, let alone for the price. These are divided into four different areas which include one for a CPU fan, two water cooling pumps, a water cooling fan and four system fans. 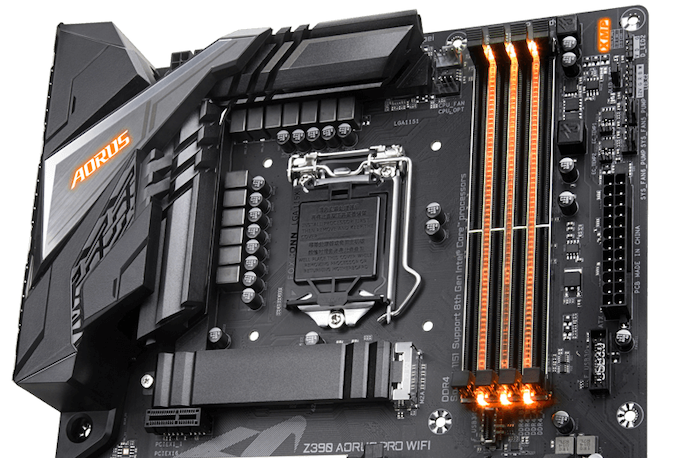 On the memory front, the GIGABYTE Z390 Aorus Pro WIFI has support for both ECC and non-ECC unbuffered memory with a maximum supported capacity of up to 128 GB across four available slots; this is due to official support for the new 32 GB UDIMM DDR4 modules. For users looking to use high-spec DDR4 memory, the Z390 Aorus Pro WIFI also supports up to DDR4-4266 memory in dual-channel with XMP 2.0 profiles. 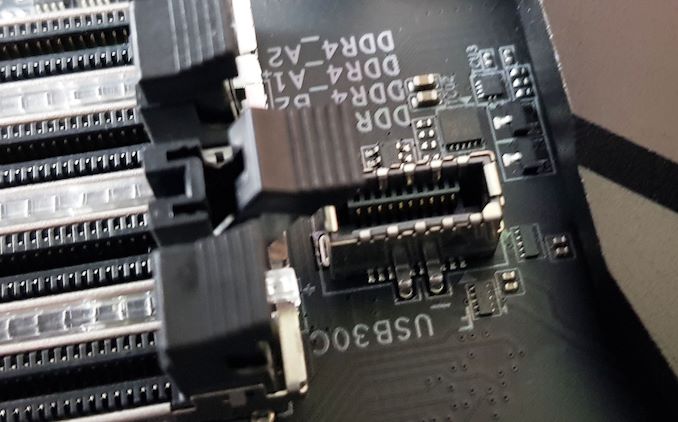 Just like we found in our GIGABYTE Z390 Aorus Master review, the front panel USB 3.1 G1 Type-C header sits very close to one of the RAM slot clasps and could potentially make installing and uninstalling memory an issue if the header is in use. The quick fix would be to unplug the header temporarily while installing the memory, but if everything required a quick fix, then it wouldn't exactly be convenient and as a result, it's a negative that needed to be mentioned. For reference, the GIGABYTE Z390 Aorus Master which costs $290 has seven. 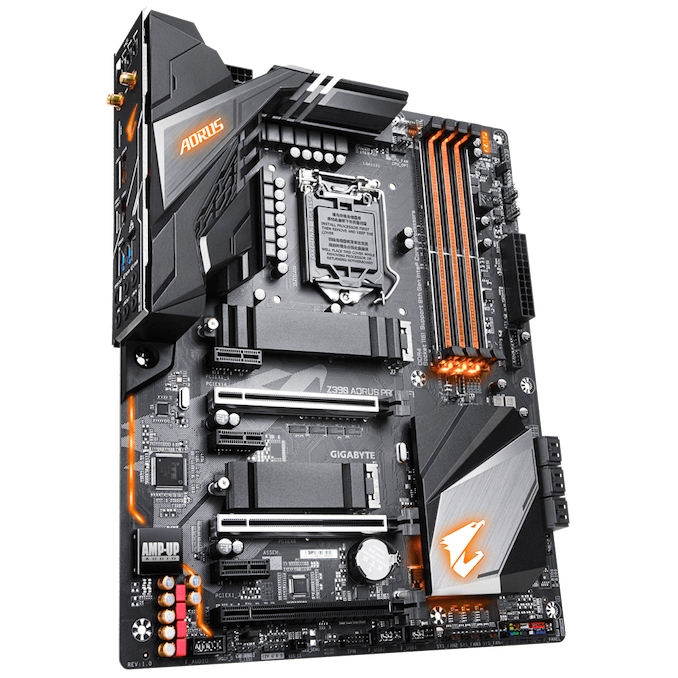 Located on the southern area of the board are three full-length PCIe 3.0 slots with the first and second slot getting a treatment of metal slot protection. These slots are run from the CPU and support x16 or x8/x8, while the third slot remains bare and is limited to just x4 from the chipset. This means that two-way SLI and up to three-way CrossFire multi-graphics card configurations can be used. In addition to the full-length slots, there are three PCIe 3.0 x1 slots present. Sandwiched in between the boards PCIe slots are two M.2 slots which each slot featuring its own M.2 heatsink. The top M.2 slot supports M.2 22110 drives whereas the bottom M.2 slot has support for up to M.2 2280. There is also a total of six SATA ports which allow for RAID 0, 1, 5 and 10 arrays to be used. 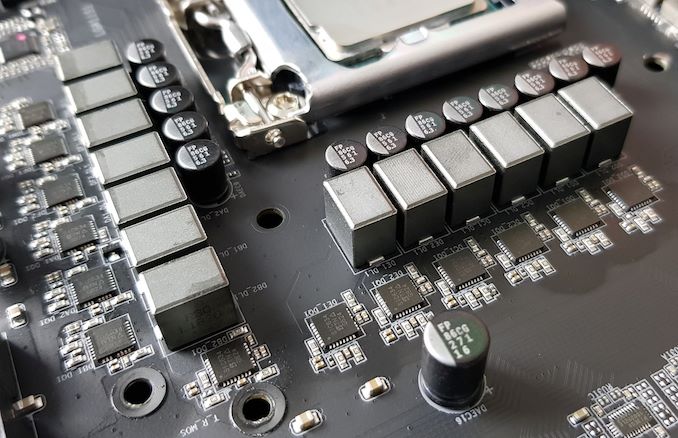 Underneath the rather hefty L shaped heatsink, which is fused together with a heat pipe, is a large power plane with a 12+1 phase power delivery. The power delivery is regulated by an Intersil ISL69138 7-channel PWM controller with a total of twelve Vishay SiC634 50 A power stages which are doubled by six Intersil ISL6617 doublers. A single Vishay SiC632 50 A power stage is used for the iGPU which technically speaking means the GIGABYTE Z390 Aorus Pro WIFI is running in a 6+1 configuration. Each of the 50 A power stages gets its own indeterminable inductor which means the CPU V-Core and iGPU sections feature thirteen in total. Providing power to the power delivery is a single 8-pin and 4-pin 12 V connector. 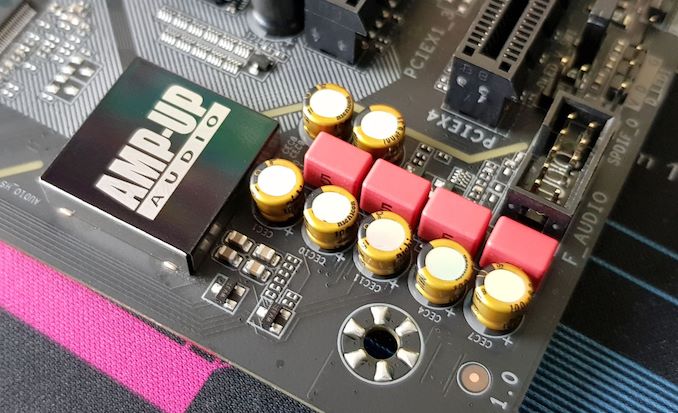 The boards audio PCB is quite simple and straight forward with an illuminated PCB separation line with the primary focus around the EMI shielded Realtek ALC1220-VB HD audio codec. Complementing this is a total of eleven audio capacitors; seven gold and four WIMA capacitors. Situated next to these are a single front panel audio and S/PDIF header.

The bulk of rear panel connections are made of USB ports There are two USB 3.1 G2 Type-A, one USB 3.1 G2 Type-C, three USB 3.1 G1 Type-A and four USB 2.0 ports. Users have the option to use the included front panel headers with a single USB 3.1 G1 header (two ports), two USB 2.0 headers (four ports) and a single USB 3.1 G2 Type-C header (one port). The Z390 Aorus Pro WIFI benefits from an Intel 9560 2T2R Wave 2 802.11ac Wi-Fi adapter which uses the Z390's CNVi for speeds up to 1.73 Gbps. A single Ethernet port is powered by an Intel I219V 1 GbE NIC, which the five 3.5 mm audio jacks and S/PDIF optical output take direction from the Realtek ALC1220-VB HD audio codec. A single HDMI 1.4 video output is present for users looking to use onboard graphics. More of a design aspect than one of function, the rear panel comes supplied with a pre-attached IO shield.

What’s in the Box 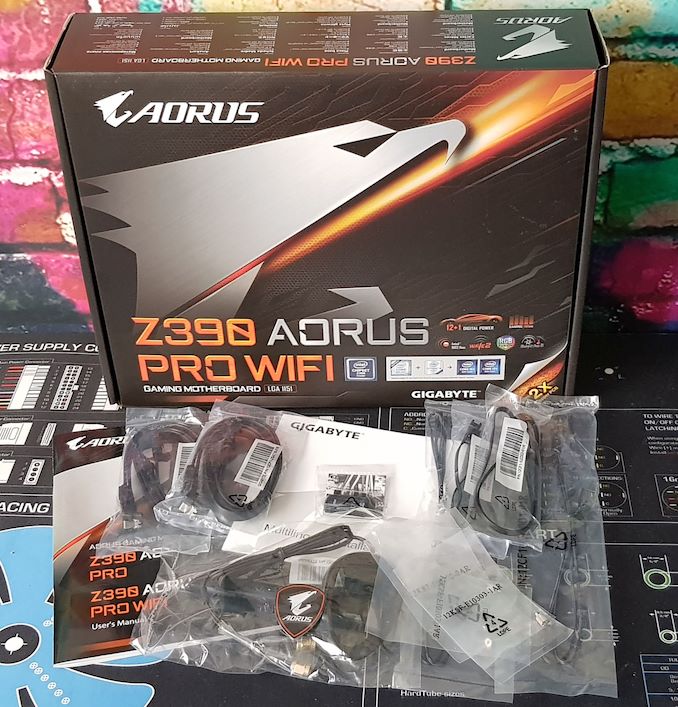 Bundled with the GIGABYTE Z390 Aorus Pro WIFI is plenty for users to sink their teeth into with four RGB LED extensions (one for each header), two M.2 mounting kits, four SATA cables and the usual driver installation disk, and installation manual. A dual band antenna for the Intel 9560 802.11ac also sits within the included accessories bundle. This feels like a good package for the capabilities of the board.