The GIGABYTE Aorus UEFI firmware on the Z390 chipset uses a simple, yet effective design which consists of a primarily black background with orange accents, and white text. 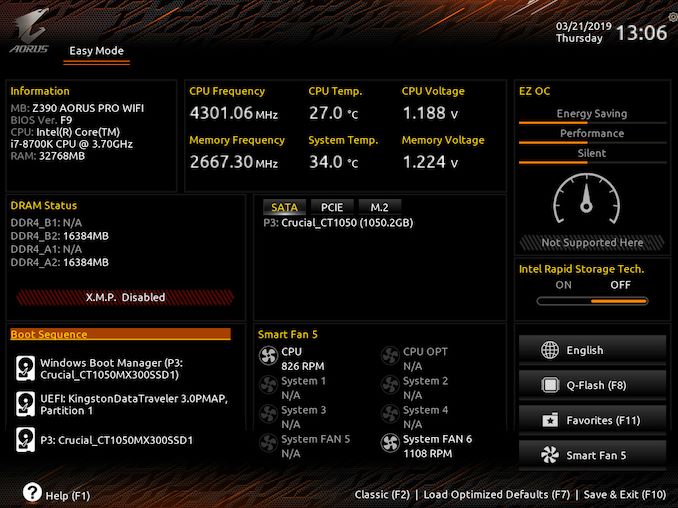 GIGABYTE's Z390 Aorus Pro WIFI has two main modes within the firmware to select between; the Easy Mode and Classic Mode. Selecting between the two different modes can be attained by pressing the F2 key. The Easy Mode has a simplistic set of panels with the aim of letting users access the most critical and key elements of the firmware including boot sequence, fan monitoring and basic system information such as CPU core clock speed, CPU VCore and temperature, among other things. Users can access the Q-Flash firmware flashing utility by pressing F8, or simply hover over the Smart Fan 5 panel and enter GIGABYTE's fan profiling utility. Features such as EZ OC aren't supported within the Easy Mode and can be enabled through the Easy Tune utility software which is provided with the board's software bundle. 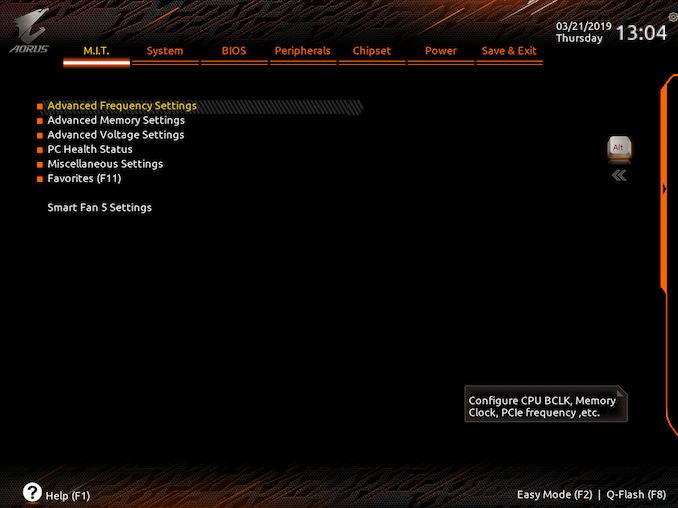 By pressing F7 users can enter the Classic Mode which opens up a set of menus which consist of M.I.T, System, BIOS, Peripherals, Chipset, Power and Save & Exit. The M.I.T section allows users to overclock their system and conveniently separates the different components into their own sections. This includes individual sub-menus for altering frequencies, memory and voltage/advanced power settings. 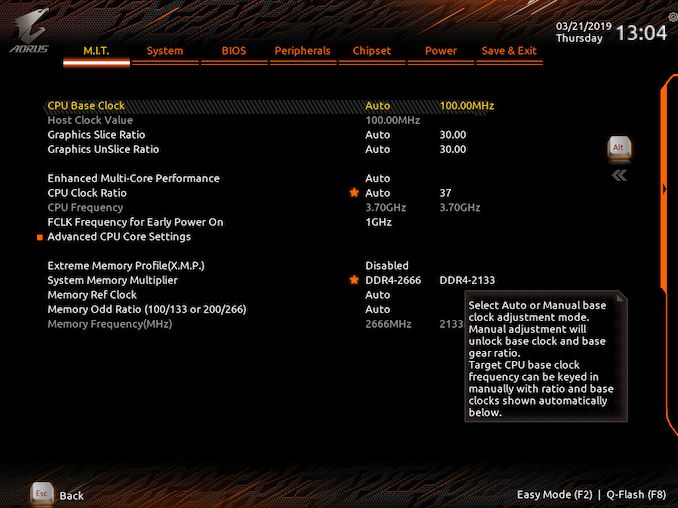 Within the advanced frequency settings section, users can change a variety of settings including CPU Base Clock, CPU Clock Ratio and enable, or disable XMP profiles on installed memory. In the advanced CPU Core settings subsection, users can overclock individual cores, apply AVX offset and alter package/platform power limits which can help with more arduous and ambitious CPU overclocks. 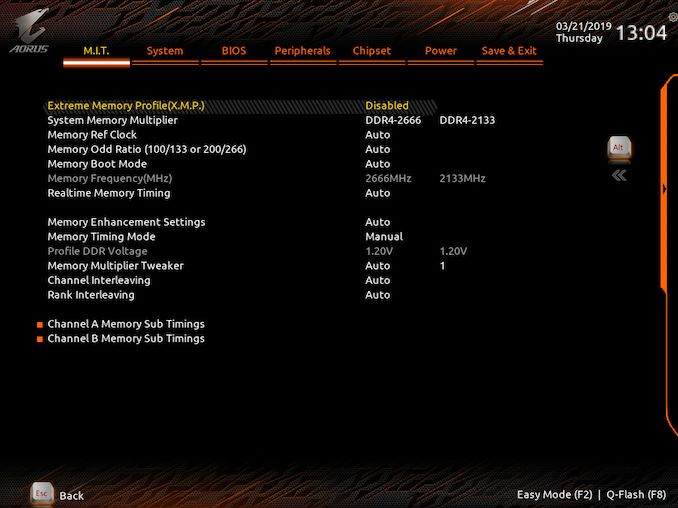 In the memory section of the M.I.T menu, users can also enable or disable an XMP profile and make latency customizations to the RAM. Other options include settings for manually overclocking the RAM through the system memory multiplier and allowing users to select between 100/133 and 200/266 ratios. 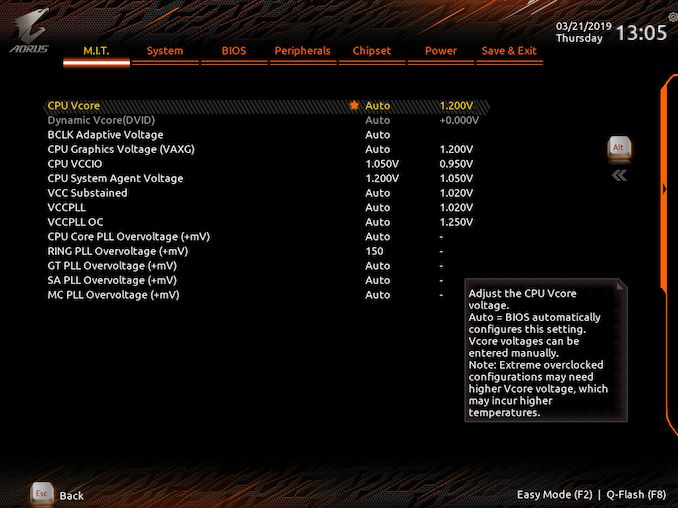 The GIGABYTE Z390 Aorus Pro WIFI doesn't have as many voltage options as the more advanced GIGABYTE Z390 Aorus Pro Master, but it does retain all of the primary and core voltage settings. The most notable are CPU VCore, CPU VCCIO and the CPU Graphics Voltage or VAXG. For more extreme overclocks, users can use the CPU Core PLL Overvoltage and VCCPLL OC settings, although the board isn't marketed nor is it really designed for extreme overclocking. 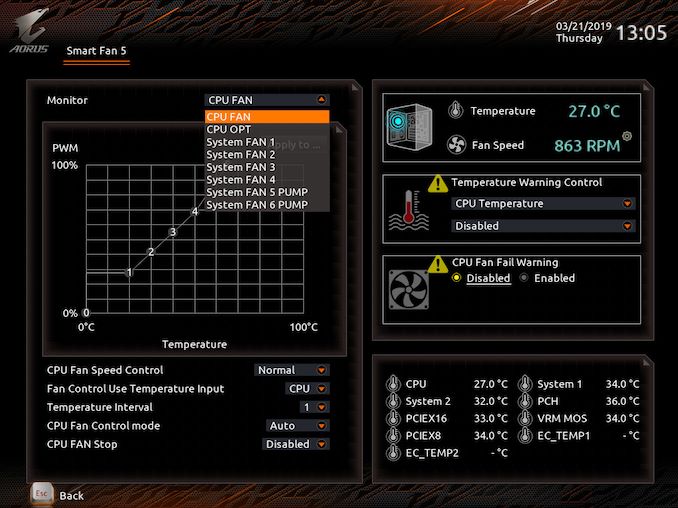 One of the key utilities within the firmware of the GIGABYTE Z390 Aorus Pro WIFI is the Smart Fan 5 utility. This allows users to control installed fans onto the eight different headers. The design is one of the more modern looking fan profile utilities and allows users to individually set a profile, or create their own custom fan curve profile onto each header. Profiles included are normal, quiet, performance and full-speed, with options for temperature warning control which consists of an alarm, with a CPU fan stop option for users to utilize on systems with low heat output.

The GIGABYTE Z390 Aorus Pro WIFI firmware is intuitive, easy to navigate and was responsive throughout use. For a sub $200 offering on a key chipset such as Z390, all of the bases are covered from CPU, memory and voltage settings, all the way to power settings, CPU VCore LLC profiles and even allowing users to select their preferred operating mode when entering the firmware; automatic, the Easy Mode or Classic Mode. The latest F9 firmware works well and is a notable upgrade visually and functionally from the initial launch BIOS, which we also noted in our GIGABYTE Z390 Aorus Master review too.

Most of the following analysis comes from our GIGABYTE Z390 Aorus Master review due to the Z390 Aorus Pro WIFI using the same software suite.

Accompanying the GIGABYTE Z390 Aorus Master is an enthusiastic software bundle that caters towards gamers, enthusiasts and audiophiles. All the software surrounds the Aorus App Center which acts as the hub with the most notable software coming via the EasyTune which is an overclocking and tweaking utility, and the RGB Fusion 2.0 software for customizing the boards RGB LEDs. 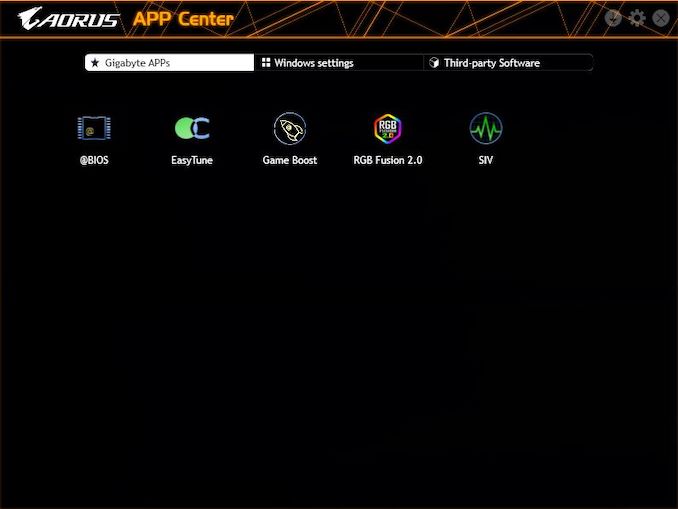 The GIGABYTE Aorus App Center acts as its software’s plexus and all other applications cannot be installed without first installing the App Center. This is a positive for users looking to keep software in one easy to use panel, which also offers users access to primary Windows settings from the Control Panel and from third-party applications too. The negative is that users must do something that they may not wish to do; no-one likes applications and software to be forced upon them, even if it’s intuitive and purposeful. 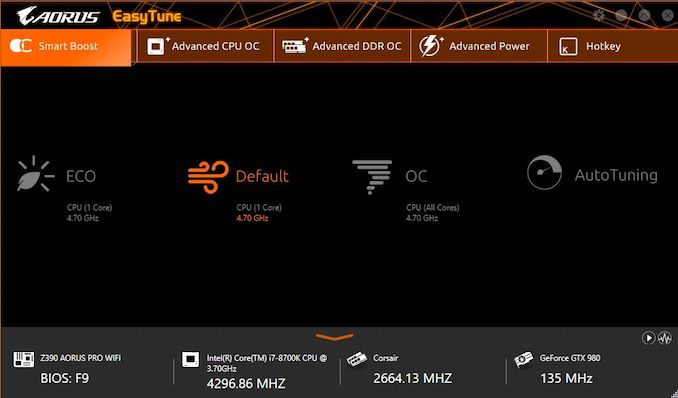 With the Aorus EasyTune software, it allows users to select between four different overclocking modes; ECO, Default, OC and AutoTuning. Eco applies an overclock of 4.7 GHz on a single core, while Default looks to do the same, but with a little more headroom in power draw. The OC mode applies an overclock of 4.7 GHz across all the cores. The AutoTune overclocking profile which was unstable in our GIGABYTE Z390 Aorus Master review didn't work for the Pro WIFI model and it seems GIGABYTE is using the same variant of the EasyTune software across all models; even if the model isn't supported. When applying the EasyTune mode on this board, it would just cycle through and hang every time. 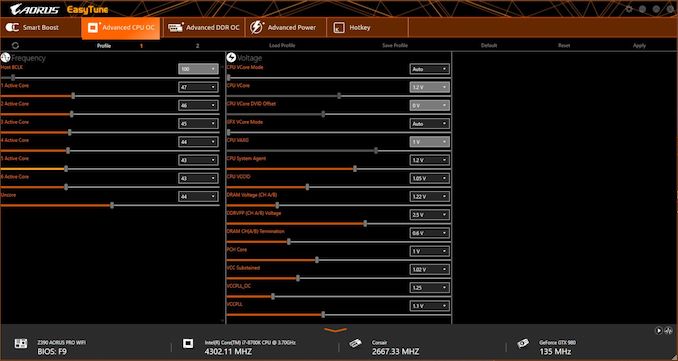 Users looking to do overclocking outside of the firmware can do so with the EasyTune utility. Within the software is an extensive list of overclocking settings for the CPU, memory and boards power delivery. Options for changing the frequency of external base clock generator, the CPU core ratio per core or all core, primary voltage settings and even memory frequency are assessable via EasyTune. Unlike some overclocking utilities from other vendors, the Aorus EasyTune offers real-time changing without the need to constantly reboot. 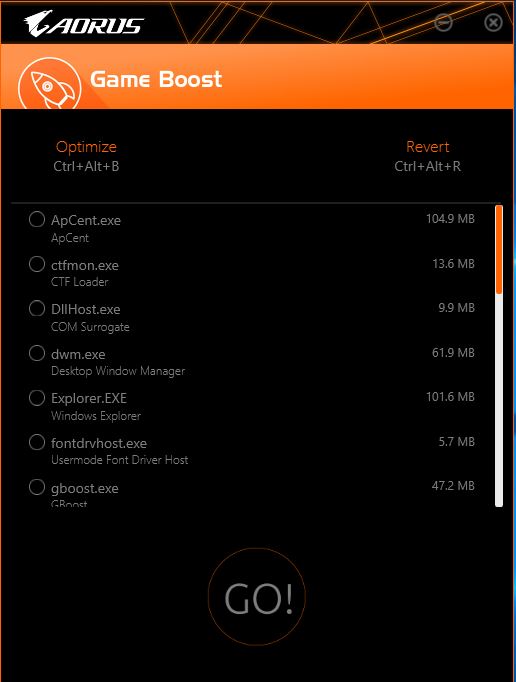 The GIGABYTE Aorus Game Boost software allows users to essentially free up system resources such as applications that hog RAM and CPU power. Users can press Ctrl + Alt + B to allow the software to ‘optimize’ the system processes or users can select through the hungriest of programs and close them down manually. The benefit is more likely to be noticed on a lower end system or if users are running highly intensive applications such as Adobe Photoshop in the background without realizing; I certainly notice if Photoshop is open and the software doesn’t offer much more than common sense would dictate. 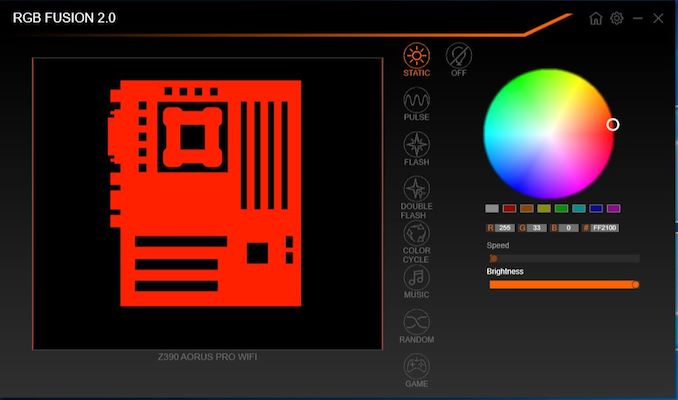 When it comes to customizing the integrated RGB LEDs on the Z390 Aorus Master, GIGABYTE has equipped the software bundle with the RGB Fusion 2.0 software. Users can select between eight different lighting effects or turn the LEDs off completely. Each of the individual lighting zones and headers can be customized to have their own separate effect/color combination or sync across the board.

While the core software bundle accompanying the Z390 Aorus Pro WIFI is useful and acceptable, I don't feel GIGABYTE done enough to provide users with the right tools to utilize the onboard audio; quite a lot of vendors on Z390 have the same problem. Even with a more premium model such as the Z390 Aorus Master, there is no official third party software supplied. Although the Realtek Audio Console is a very useful tool, a third party software suite downloadable from the official product page and the installation CD would make the bundle more complete and give users a better auditory experience overall.