One of the prominent parts of Intel’s announcement this week for the new 9th Generation core processors was that both the overclockable consumer processors and the new high-end desktop processors all feature a soldered thermal interface material (STIM) between the silicon die and the heatspreader. This is a vast improvement over the previous thermal interface material due to the solder's superior ability to conduct thermal energy away from the silicon die. As part of the announcement, Intel also engaged in some extreme overclocking at its launch event using Liquid Nitrogen as an effective coolant, and some overclocking world champions. 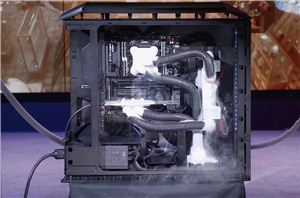