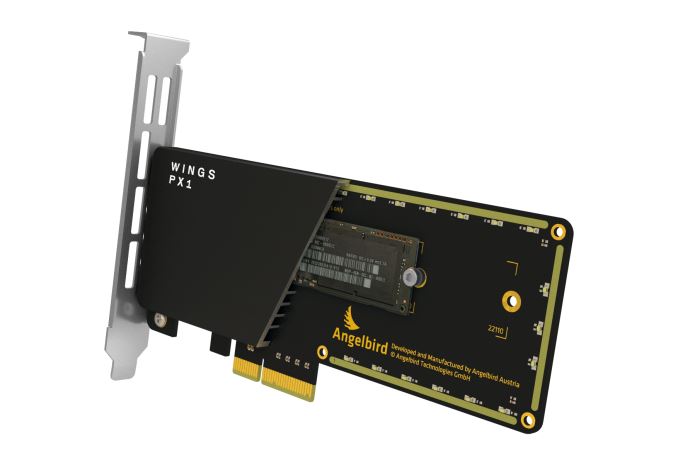 The M.2 form factor has quickly established itself as the most popular choice for PCIe SSDs in the consumer space. The small size easily fits in to most laptop designs, and the ability to provide up to four lanes of PCI Express accommodates even the fastest SSDs. By comparison, SATA Express never caught on and never will due to its two-lane limitation. And the more recent U.2 (formerly SFF-8639) does have traction, but has seen little adoption in the client market.

Meanwhile, although M.2 has its perks it also has its disadvantages, often as a consequence of space. The limited PCB area of M.2 can constrain capacity: Samsung's single-sided 950 Pro is only available in 256GB or 512GB capacities while the 2.5" SATA 850 Pro is available in up to 2TB. And for Intel, the controller used in their SSD 750 is outright too large for M.2, as it's wider than the most common M.2 form factor (22mm by 80mm). Finally and most recently, as drive makers have done more to take advantage of the bandwidth offered by PCIe, a different sort of space limitation has come to the fore: heat.

When testing the Samsung SM951 we found that our heavier sustained I/O tests could trigger thermal throttling that would periodically restrict the drive's performance. We also had a brief opportunity to run some of our tests on the SM951 using the heatsink from Plextor's M6e Black Edition. We found that extra cooling made noticeable differences in performance on some of our synthetic benchmarks, but our more realistic AnandTech Storage Bench tests showed little or no change. But other than the quick look at the SM951, we haven't had the chance to do a thorough comparison of how cooling affects high-performance M.2 drives, until now. 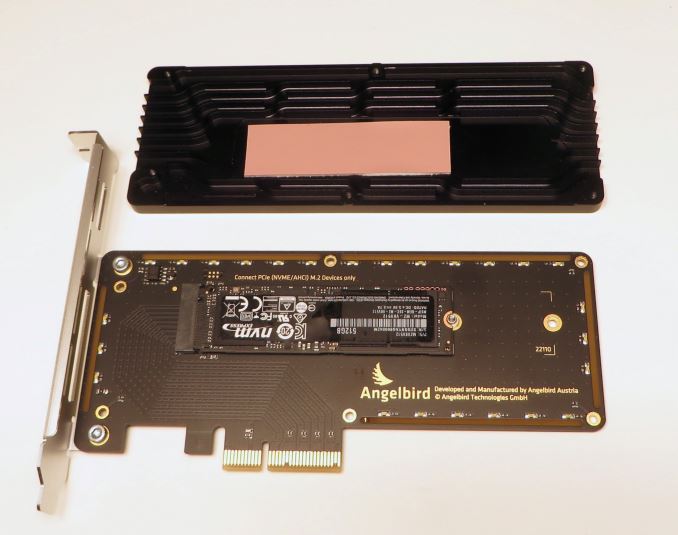 Austrian SSD manufacturer Angelbird has released a new PCIe to M.2 adapter: the Wings PX1. With an aluminum heatsink and thermal pads to conduct heat away from both sides of an SSD, the PX1 aims to provide M.2 drives with the same cooling capacity that larger add-in card SSDs have. Angelbird doesn't currently sell a M.2 PCIe SSD, so the Wings PX1 is intended to complement other M.2 SSDs, especially drives like Samsung's 950 Pro. As a passive adapter, it supports PCIe drives using either the AHCI or NVMe protocols, but it does not support M.2 SATA drives due to the lack of a SATA connector to pass through a connection from elsewhere on the motherboard. The M.2 connector connector is keyed in the 'M' position, indicating support for up to four PCIe lanes, and it is also compatible with M.2 drives that use two PCIe lanes and are typically notched in the 'B' and 'M' positions.

Aesthetically, the Wings PX1 is for the most part quite plain. The exterior of the heatsink is a smooth slab of aluminum with a matte black finish adorned with the product name and Angelbird's logo. The PCB is is also a plain black, with the regulatory markings and product name printed on the back in the same gold as the electrical contacts. Tucked under the heatsink is the glaring exception to the otherwise unassuming design: 25 white LEDs line the perimeter of the card, shining through the gap between the PCB and the heatsink and glowing through translucent channels near the edge of the card where the black finish was omitted. For users who don't want the illumination, it can be disabled by removing the zero-ohm resistor in the corner of the board. This might void the warranty, but it's a pretty safe modification to do since the LEDs are running solely off the 12V supply and the drive is powered entirely from the 3.3V circuits.

To assess the effectiveness of the PX1's heatsink, I've tested the Samsung 950 Pro in the Wings PX1 with and without the heatsink and thermal pads installed, while subjected to most of our usual client SSD test suite. Our initial review of the 950 Pro turned up clear signs of at least some thermal throttling, but did not explore the full extent of the impact of temperature on performance. One confounding factor is that our testbed does not have working support for PCIe Active State Power Management (ASPM). Without it and with no added cooling, the 950 Pro's idle power consumption was enough to heat it up to the point that transistor leakage added another 5% to its power draw compared to running at room temperature.

The Wings PX1 was tested in the upper-most PCIe x16 slot in our testbed, providing it with unobstructed airflow from the intake fan of the Corsair Carbide 200R case. The fan speeds were regulated according to the motherboard's "Silent" profile and run around 900 RPM. There were no other expansion cards installed to generate heat in the vicinity of the PX1 or to affect airflow.

Meanwhile, now that we're revisiting the Samsung 950 Pro and its sensitivity to cooling, we've realized that some of the results reported in our original review reflected an inconsistent thermal environment for the drive, which we've gone ahead and corrected for with this article. In our original review, I added a fan mid-way through testing after experiencing some system instabilities in order to rule out overheating (it turned out to be power delivery). Consequently, some of the results from those runs with a fan were used in the final review and made the 256GB 950 Pro occasionally appear much faster than the 512GB model. So ahead of this review, I've gone back and corrected the scores in our SSD Bench database to consistently reflect a normal cooling environment without a heatsink or dedicated fan.

Finally, let's talk about pricing and availability. The Angelbird Wings PX1 has a MSRP of $75 USD/€66 EUR and comes with a 10 year warranty. RamCity is the initial distributor for the Wings PX1, which is currently listed on their website for AUD$100.90 and will also be sold through their Amazon storefront.