Today at Computex in Taiwan, Rockchip announced a ultra-low-power WiFi SoC for IoT devices. The RKi6000 promises huge jumps in power efficiency, and the ability to provide WiFi connectivity at the levels of Bluetooth Low-Energy. The RKi6000 is a 802.11b WiFi combo-chip with up to 11Mbps data transfer rates. Rockchip explains that it achieves such drastic improvements in low power in the following ways:

While Rockchip has a clear advantage in power over other LP WiFi chipsets, it's the comparison with other low-power transmission technologies that Rockchip is able to show its true strength: 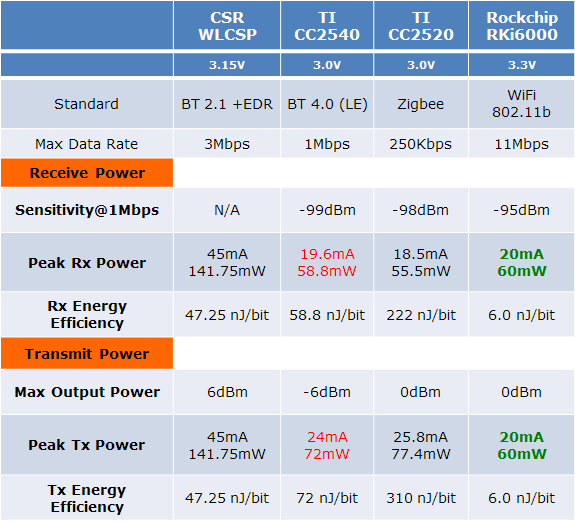 When comparing the RKi6000 running WiFi 802.11b at 11Mbps, the chipset is able to present an order of magnitude of improvement over other technologies such as Bluetooth with Enhanced Data Rate, Bluetooth LE or Zigbee. The fact that this is a WiFi technology simplifies deployment and development of IoT application as it is able to use connections provided by standard infrastructures.  Applicable product categories include wearables, home appliances, home automation and safety. The RKi6000 starts availability in Q3 2015.