Much like a smartphone, the display of a tablet is one of the most critical elements. Not only is it the only method of receiving information, it is also the primary method at input. A mediocre tablet can get by with a poor display, but unlike laptops the bar for poor displays on a tablet is much higher. A good tablet needs a good display, and Dell has delivered here.

The Venue 11 Pro is equipped with a Samsung SDC4C48 panel, which is an 8 bit model. The 10.8 inch panel is 1920x1080, for a good 204 pixels per inch. While not class leading in pixel density, everything looks clear and sharp. It is also a good compromise for desktop use, where you can pretty easily get by with just 125% scaling to keep a reasonable amount of desktop real estate available. 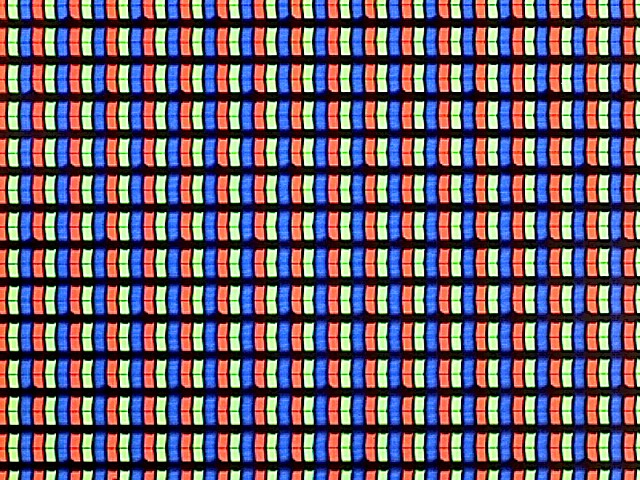 The Samsung display is a full RGB stripe, so there is no question about subpixel density like on a RGBW pentile arrangement. Color accuracy is generally better as well with RGB, and to test that, we will turn to SpectralCal’s CalMAN 5 suite, along with an X-Rite i1Display Pro colorimeter for brightness and contrast measurements, and the X-Rite i1Pro spectrophotometer for color accuracy testing. 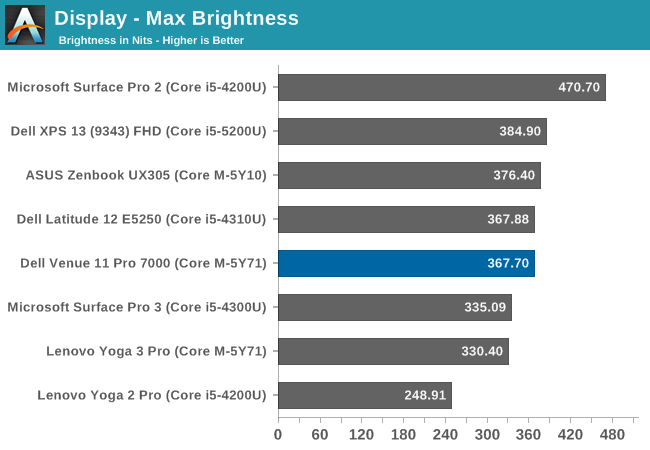 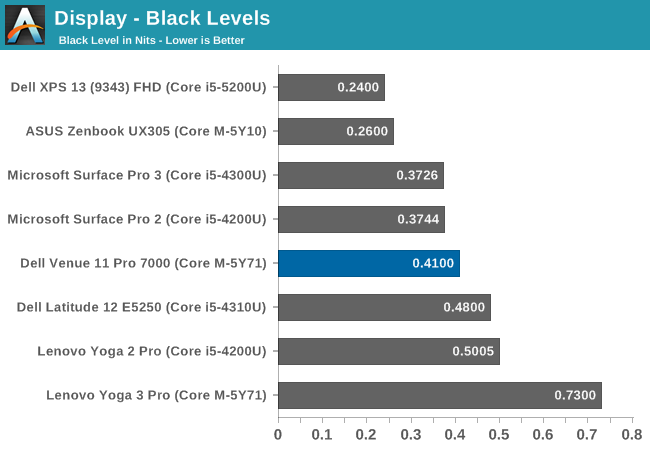 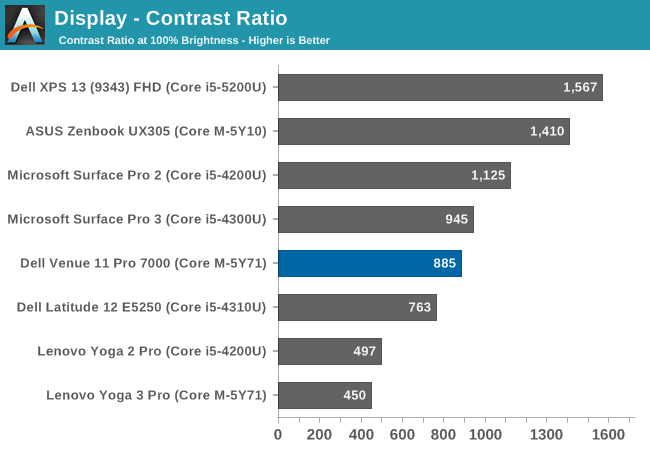 Dell’s premium Windows tablet starts off quite well, with good brightness at about 370 nits. The black levels are just OK though, which results in a good but not spectacular 885:1 contrast ratio. For those that need a dim display for use in a darker environment, The Venue 11 Pro goes down to around 18 nits so it should be no problem there. 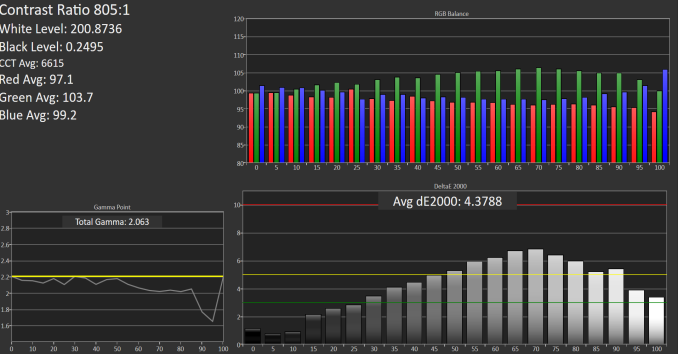 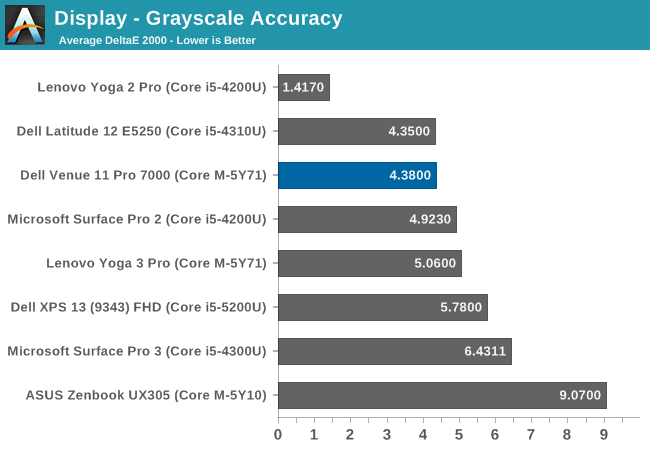 Looking at grayscale, the Venue 11 Pro has not too bad of a score out of the box, but it could use some work. Overall the dE2000 is 4.38, which is due to the greens being a bit too strong, and the gamma falls off of the 2.2 target especially at the upper brightness levels. The white point is good overall though at 6615, very close to the ideal target of 6504. 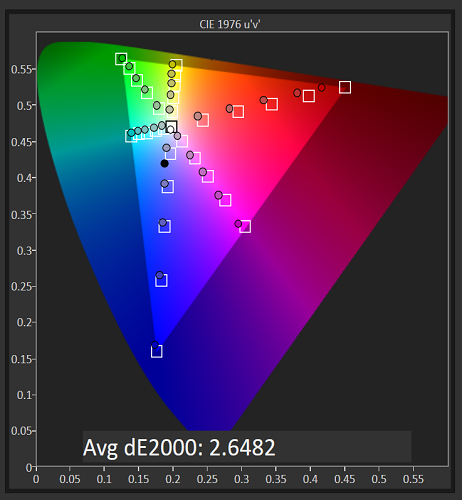 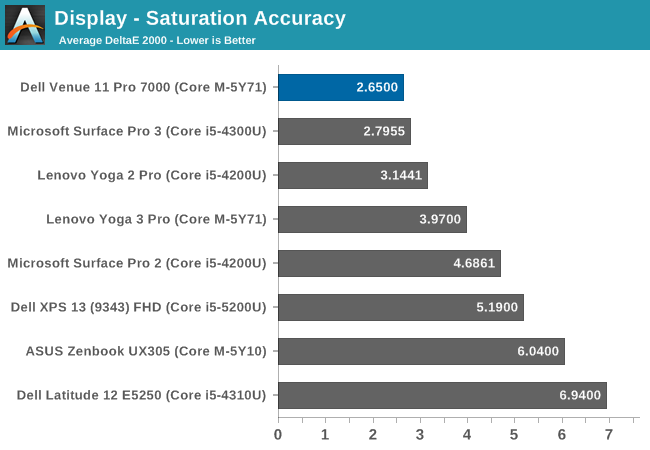 The saturation sweep is excellent, with an overall dE2000 of just 2.65, nicely under the target score of 3.0. The reds are a bit compressed though, and the 100% red is closer to 80% than 100%. The other colors are very close to their targets though. 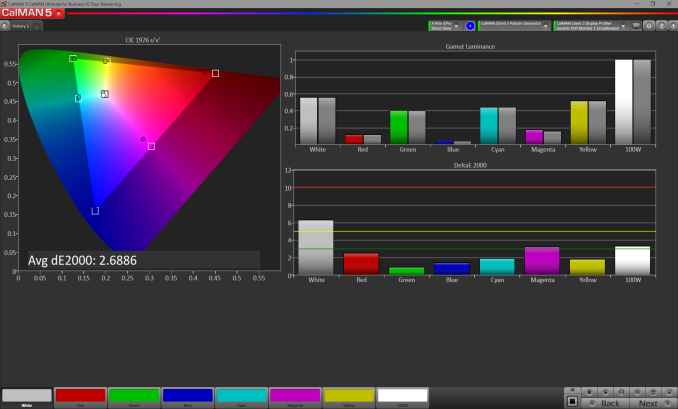 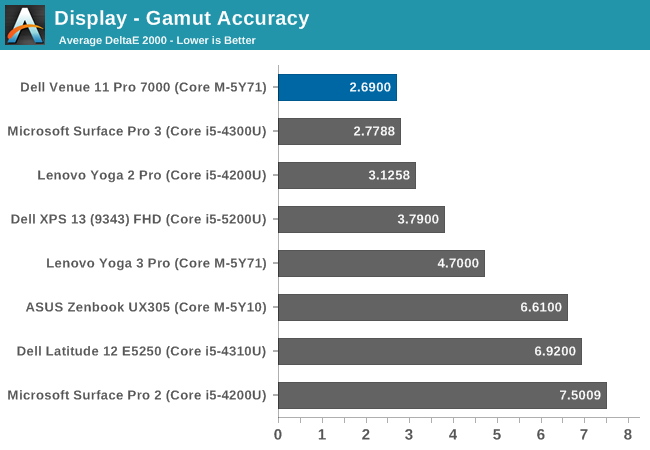 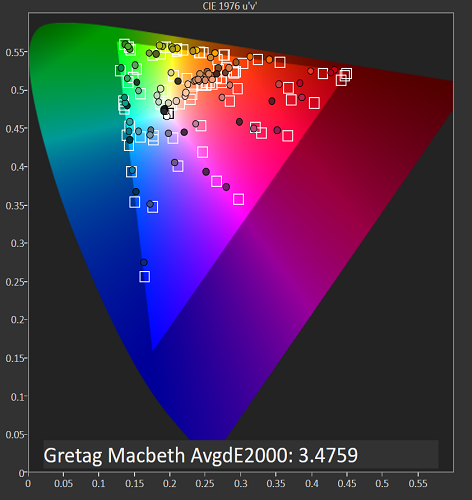 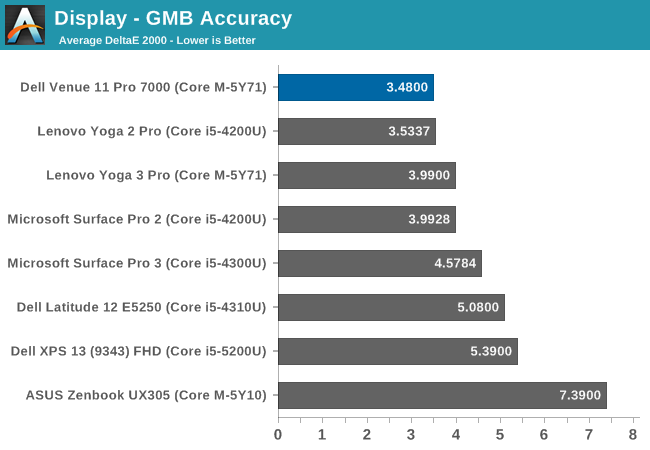 The Gretag MacBeth colorchecker is the most comprehensive test, and the overall score is 3.48, which is just above the 3.0 target. For an out of the box experience, few would complain about the Dell Venue 11 Pro tablet. Colors are generally quite good, and the brightness and contrast is also good.

Being a Windows tablet, we can also calibrate the display. Since the worst offender was the grayscale performance, calibration should help a lot to pull those scores down.

Few would be left wanting with the Venue 11’s display. It has the kind of quality display one would expect in a premium tablet. Color accuracy is good out of the box, but because it is Windows it can be improved upon assuming one has the tools to do so. Really the only issue I had with the display is the 16:9 ratio, which works great for media consumption like MLB.TV and the like, but a taller overall display would make it a better tablet for both portrait and landscape modes.