While the desktop PC industry has been reported as shrinking these last few quarters, the dichotomy rests in a drive towards the smaller form factors while the large under-the-desk systems market remains steady. This would suggest a split between mini-ITX and ATX users, leaving micro-ATX platforms stranded in the middle. Is there still room in the market for this form factor?  Today we review MSI’s take on FM2+ and micro-ATX with the A88XM-E35.

In our recent FM2+ motherboard reviews [1,2], one of the common themes has been the ability of the motherboard power delivery to cope with temperature. When the power delivery is too hot, the system may cease to function or various benchmarks fail. Over-engineering the power delivery to be efficient has benefits, but increases the cost of the product. When I pulled the A88XM-E35 out of the box and saw no heatsink present, I was worried that the same issue would rear its head, and it did. Without additional VRM cooling, the A88XM-E35 caused an instant reboot on some of our more strenuous benchmarks (Agisoft, Handbrake). Therefore it should be noted that the results of this review were taken with an additional fan on the VRM cooling, and users of the A88XM-E35 should bare this in mind.

With that aside, the A88XM-E35 sits as a $68 FM2+ motherboard with two DRAM slots, a PCIe x16, x1 and PCI slot, six SATA 6 Gbps ports, HDMI output and support for four USB 3.0 connectors. The Ethernet and audio codec are made by Realtek, and the board has three fan headers, two of which are 4-pin. Even at $68 there is some styling, with the PCB in black and single color slots except for the PCIe 3.0 x16. 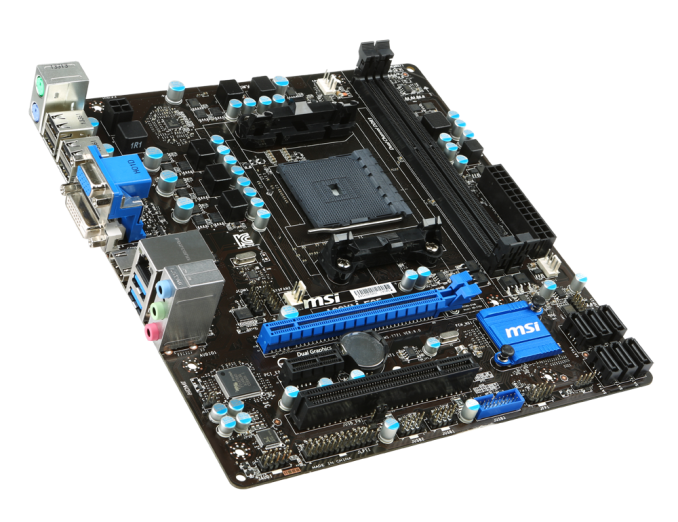 Over the last couple of MSI motherboard reviews, I have been critical of the lack of development in the BIOS and some issues in the software. These are starting to be addressed with the MSI A88XM-E35, and given the nature of software, I would imagine on other MSI FM2+ products as well. This includes navigation guidance in the BIOS, retaining the fan controls, and disabling the ability to ramp up the CPU to 1.8 volts in the operating system with a simple mouse movement. We still have access to the RAMDisk and OC Genie as part of the software, as well as the visual fan controls and system browser in the BIOS. The next stage would be better organization of the overclock options in the BIOS, however MSI has disabled voltage control on this motherboard. This is probably due to the low cost nature of the system.

MSI rated this motherboard as Military Class 4 (optimized components, better chokes and capacitors) but, rather amusingly, when installing the wallpapers from the CD, the Military Class III wallpaper shows up. With the Live Update 5 software we still have one of the best audio-updating systems, but we still need MSI to add in download sizes before selecting what to download. I mention this as the updated chipset drivers from MSI were 620 megabytes, and Live Update 5 did not recognize that I had the same ones installed. The latest version of Live Update 5 has issues with FM2+, and thus the version on the CD is recommended.

Performance (with the extra fan on the power delivery) from the MSI motherboard has it fighting each benchmark with the bigger, more expensive products. The benchmark scores overall seemed around average, although WinRAR was actually particularly low. The ALC887 audio codec shares performance with the ALC892 on the bigger motherboards, but is limited to 2.1 speaker setups. Despite being a smaller motherboard there is no reduction in power consumption at idle, and USB performance is lower than average.

Compared with the $105 motherboards we have tested previously, we have to consider if paying an extra $37 (~54%) makes sense for better power delivery and a few extra features. But for $68, as a motherboard to put an APU in, 16GB of DRAM and the MSI software ecosystem, as long as you add an extra fan, it does seem to offer good value.

The first thing I noticed when taking the motherboard out of the anti-static bag was the lack of a power delivery heatsink. Perhaps it is because I have been reviewing motherboards >$85 for the past three years, but to see a motherboard without such a heatsink seems almost alien. MSI are using a simple 4+1 phase design, but given the heat generation issues we have seen with Kaveri so far, I would have preferred at least a $0.50 effort rather than the attempt to make the motherboard look cleaner with a black PCB finish. 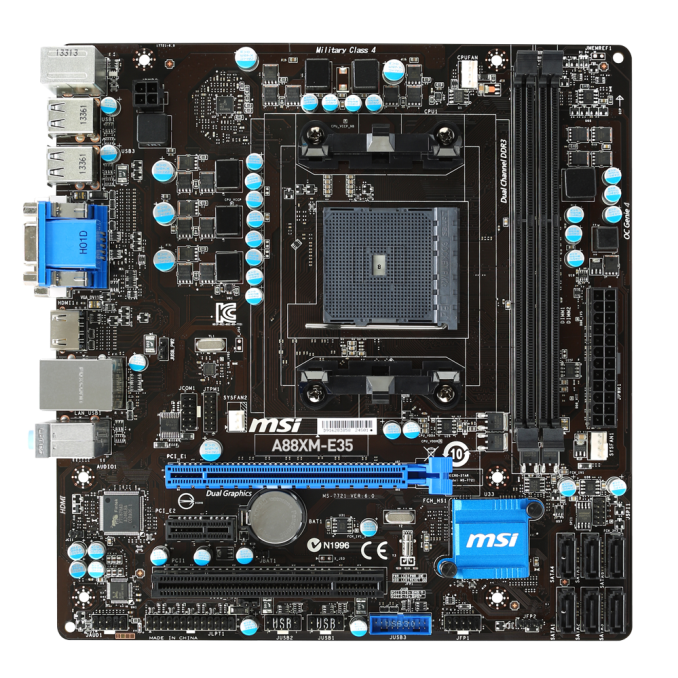 As always, the AMD socket area is actually quite big. The lack of a heatsink does offer more room for larger, more intrusive CPU coolers. At this point I would suggest one that does blow over the heatsinks, given the issues we encountered. We are right up against the two DRAM slots on the right, which both use dual-sided latch mechanisms. Normally on cheaper products we end up with the thinner DRAM memory slots, but MSI are using the thicker studier ones on the A88XM-E35.

On the right hand side of the motherboard, alongside the 24-pin ATX connector and 4-pin fan header are the six SATA 6 Gbps ports. Normally we find these arranged at right angles to the motherboard, but due to cost saving these are individually planted perpendicular. There is no alternating mechanism to allow right angled SATA connectors apart from the far edge, and users with triple slot GPUs will have issues with three of the SATA connectors, but for the intended market we have plenty to play with. 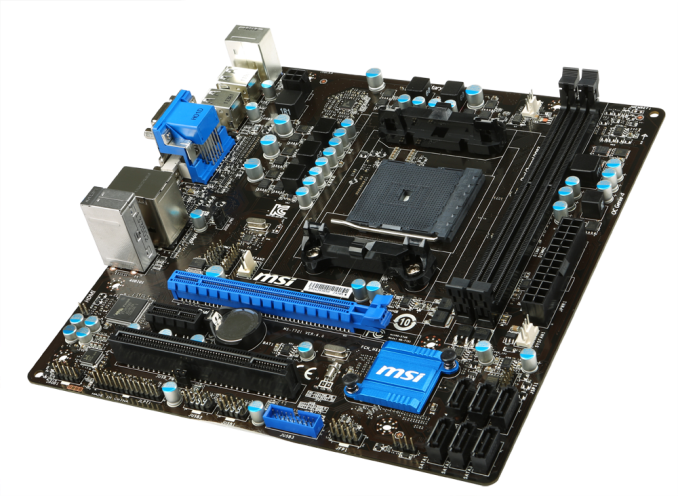 Along the bottom of the motherboard we have the audio header (Realtek ALC887), a printer port header, two USB 2.0 headers, a blue USB 3.0 header and the front panel header. The PCIe layout gives one full Gen 3.0 x16 lane in blue and a PCIe 2.0 x1 from the chipset, followed by a PCI port. Above these ports is a TPM header along with a COM header.

Given the price point of the motherboard, the rear IO is expected to be sparse, but we do get separate PS/2 connectors for a mouse and keyboard, four USB 2.0 ports, DVI-D/VGA/HDMI outputs, two USB 3.0 ports, a gigabit Ethernet port (Realtek) and audio jacks.

Given the low price point, I was not expecting anything spectacular in terms of connectivity, so the single NIC and normal chipset SATA/USB connectors are understandable. The chipset should afford eight SATA 6 Gbps ports, but only six were present – it might have been worthwhile adding a pair of eSATA ports on the back. I would have also liked to see a clear CMOS button, even a very basic one. I am sure MSI buys these in bulk and it would not have been too hard to implement.