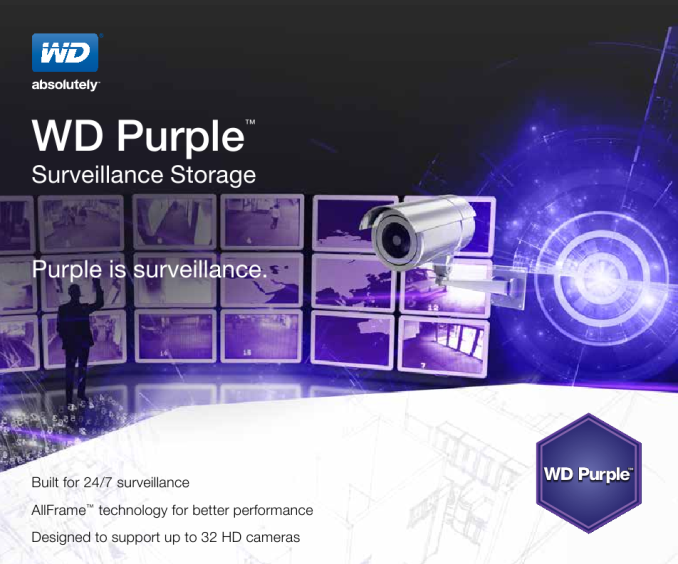 Western Digital's campaign to delineate hard drive market segments and the accompanied colour-based branding has proved to be very popular. The Red drive lineup for the SMB / SOHO NAS market and the Black drives for the enthusiast segment have been greeted with good market acceptance. Today, Western Digital is expanding this initiative with the Purple branding for hard drives targeting the growing surveillance market (NVRs and NAS units dedicated to recording feeds from IP cameras).

All SATA hard drives fulfill the same basic functionality of storing data on platters. Most hard drives use the same hardware circuitry (except for enterprise drives which have features such as RAFF - Rotary Accelerated Feed Forward - that require extra sensors on the drive to better handle vibrations in storage arrays). The scope for differentiation boils down to the firmware. The SATA protocol has a number of optional features intended to improve performance for specific scenarios. One example is NCQ (Native Command Queuing), which allows for reordering of commands to improve efficiency. Another example is the ATA Streaming Command Set, which targets A/V setups by providing features targeting video payloads. Drives targeting the A/V and surveillance markets can optimize the firmware around this optional specification.

Western Digital has been serving the DVR / STB / surveillance storage market with the WD-AV GP product line for quite some time now. Hardware-wise, these drives happen to be the same as the Green drives, but the difference happens to be in the firmware. WD's ATA Streaming Command Set implementation under the SilkStream tag supports up to 12 simultaneous HD streams.

Most NVRs are based off NAS platforms in RAIDed environments. Since the WD-AV-GP drives were not specifically geared for use in NAS devices, it makes sense for WD to develop firmware optimized for video surveillance storage using the Red drives as the hardware base. The result is the WD Purple lineup.

The Purple hard drives (WDxxPURX) are dedicated to service the surveillance market. Similar to the WD-AV GP lineup, these are also built for 24x7 operation. The SilkStream tag for the optimized firmware in the WD-AV GP lineup is replaced by AllFrame in the WD Purple. The optimizations work with the ATA Streaming Command Set to improve playback performance and reduce errors / frame loss. While SilkStream was advertised to support up to 12 simultaneous HD streams, AllFrame is designed to support up to 32 HD cameras / channels. Obviously, advantage of the AllFrame technology is possible only with the host controller support. It goes without saying that the appliance vendor must be in the compatibility list provided by WD in order to take advantage of the surveillance-specific features in the Purple drives.

Similar to the Red drives, these come with the IntelliPower feature (rotational speed of 5400 rpm) and TLER enabled. IntelliPower enables WD to provide best-in-class power consumption numbers with the Purple drives. There is no RAFF support on-board, though, as these are meant for table-top appliances with 1 to 8-bays. The drives are rated for workloads up to 60 TB/yr. For reference, recording 4 x 1080p30 streams for 365 days requires 200 TB of storage. SD streams come with lower storage cost. In any case, putting the WD Purples in RAID with multiple drives should easily keep workloads for each drive under 60 TB/yr. For SMB / SME surveillance setups requiring up to 64 cameras, WD suggests the use of Se drives, while mission-critical applications are advised to utilize the more powerful Re drives. 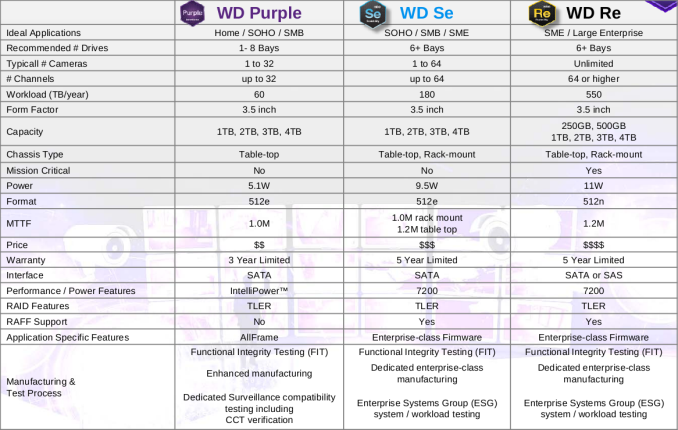 The 3.5" Purple drives come in 1, 2, 3 and 4 TB capacities. WD has a number of launch partners including, but not limited to, PELCO, HikVision, Synology and QNAP.

In other news, Seagate also announced the Surveillance HDD yesterday, targeting the surveillance market. Unfortunately, we weren't briefed extensively about it, but the specs seem similar to that of the Purple lineup (except for the addition of RV - rotational vibration - sensors for operating in multi-drive environments, which seems similar to RAFF technology).