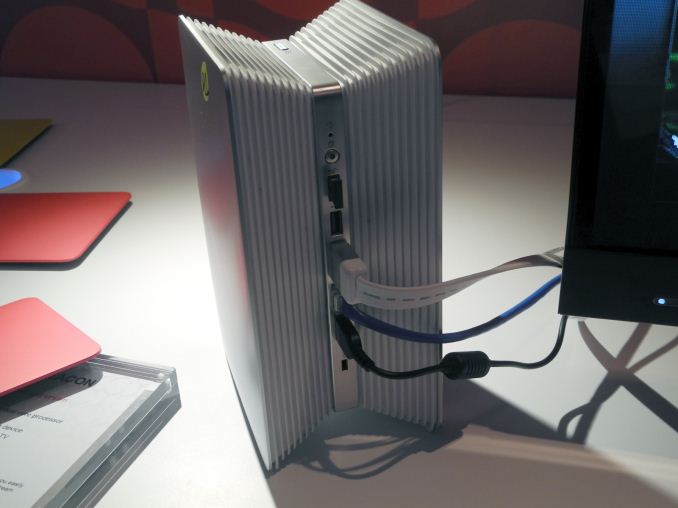 Intel's Evansport storage platform and their Berryville STB platform are, for all practical purposes, the same. Given this, it is only logical to expect an Evansport NAS to double up as a media streamer. The Evansport NAS units currently in the market (such as the Thecus N2560, Asustor AS-602T and the Synology DS214play) all come in the standard NAS tower form factor. This looks pretty out of place in the living room / entertainment center. To address this concern, Lenovo is coming out with the BEACON, a product based on the Intel CE 5315. The unit's industrial design is a work of art, as shown in the gallery below.

Two hard disks can be installed and configured in either RAID-0 or RAID-1. An XBMC app is available for media playback through the unit's HDMI port. Evansport's transcoding engine is taken advantage of to stream media to mobile devices. Currently, Android and Windows Phone are supported, with iOS support slated to come later (understandable, since Lenovo sells Android and Windows Phone devices). It must be noted that the product is from Lenovo, and not LenovoEMC. The latter concentrates on traditional-looking NAS units for home consumers as well as SMB / enterprise customers.

The Lenovo BEACON is slated to hit shelves in April at a price point of $199 for a diskless unit.