Upon first glance, you will instantly notice that Gigabyte has not used a graphical based BIOS for this motherboard. This is perhaps due to Gigabyte’s late entry into the graphical arena for BIOSes, but the feel of the BIOS could be considered somewhat backdated compared to most motherboards today.  Nevertheless, it is built on the functionality and ease of use of the past ten-plus years, so it should work.

First thing to note is the front screen, which due to the old-style nature, does not have any of the information we would generally want the minute we enter the BIOS.  We would like to see, inter alia, what CPU is in the board, what speed it is running at, how much memory is in the system (and how fast it is running), CPU temps, voltages, and fan speeds.  For any of this information, the user has to delve into the MB Intelligent Tweaker or PC Health Status options from the front menu.

The overclocking options are located under the MB Intelligent Tweaker (M.I.T) section. Within this submenu you can change everything to do with the system clocks, memory ratios and voltages. The IGX (integrated graphics) configuration is where you can tweak the onboard GPU of the Llano APUs (even if the GPU is locked – the options will actually just do nothing) and the rest within this menu is fairly self-explanatory. The one gripe I have with this BIOS is the voltage options. It does not give you the voltage which you are setting but instead it uses the offset (+/-0.0125 V) style. It is not an issue with the BIOS but more a personal preference.

The fan settings are located under the PC Health Status menu. There are not very many options for the fan settings at all. When it comes down to you wanting to choose whether you would like the system fans to be on the SMART fan option, there are only two options to choose from and they consist of ‘Enabled’ or ‘Disabled’. Just like the CPU fan, the system fans, which when set to enabled, will slow the fans down when the system is in idle and they will subsequently speed up when the system starts to warm up. The CPU fan controls are very limited as well. You can choose from either a voltage for the fan to run at or you can choose the PWM feature. In our case when the motherboard was tested, auto was used.

There are no noticeable changes between the F2 BIOS which was first installed on this motherboard compared to the F6 BIOS which was installed and used for our testing. It was easily updated via a USB stick (FAT32 formatted) by using Q-Flash, which can be started by pressing F8 whilst in the BIOS. The only major changes to the BIOS would involve the CPU compatibility codes and possible improvements to the system stability.

For the Gigabyte GA-A55M-S2V and the BIOS system, there are no automatic overclocking features available.  As a result, users will have to perform manual overclocks to increase performance – I will reiterate that the VRM solution on this board isn’t designed to dissipate heat as much as the A75 boards we’ve tested, and your mileage may vary.

I dived straight into the deep end. Due to overclocks with this particular processor being successful on other motherboards, I started off with a 125 MHz bus which is a 25% overclock and it booted straight into Windows without any issues. These overclocks were achieved using the auto settings for the voltages. I continued to push higher until the motherboard would no longer boot up and I eventually ended up on a final clock speed of 3640 MHz. This was achieved using a 140 MHz bus speed with 1.5 V on the CPU, whilst keeping the RAM as close to 1333 MHz as possible by adjusting the straps as I went along to ensure that the RAM was not holding the overclock back.  This gave a fully stable Blender test. 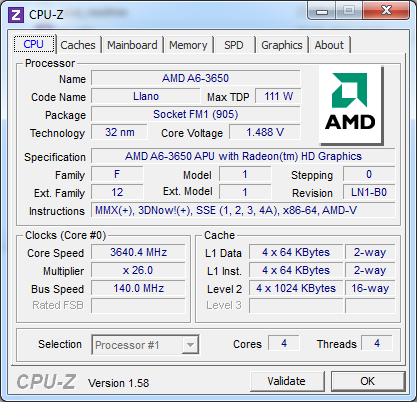 A75 vs A55, Visual Inspection In The Box, Board Features, and Software
Tweet
PRINT THIS ARTICLE
Comments Locked