Over the past 12 months I have covered a number of ECS boards, from the Sandy Bridge and Fusion range, including one with a Hydra chip.  Looking back on those, there was a distinct running theme – a willingness to offer the consumer perhaps something different. My tour of the ECS headquarters back in June, and a Q&A session with an ECS VP, gave credence to ECS pushing more into the consumer market rather than their roots in OEM.  X79 was a focal point for this, and today we are seeing the fruits of that perseverance, in the X79R-AX (Black Extreme) motherboard.

Overall, I have to say that this board performed well, after some initial teething problems.  What we have is a $310 X79 motherboard ($260 with mail-in rebate from ECS until 2/3) with dual Gigabit Ethernet, support for 12 SATA devices (and 12 SATA cables included), a USB 3.0 bracket, support for quad-SLI/CrossfireX as well as onboard WiFi and Bluetooth.  With the MIR this makes it a very attractive board, within firing line of the Gigabyte X79-UD3 reviewed previously.

However, some users will note some areas which are perhaps comparably not as desirable compared to others – a Realtek ALC892 audio rather than the ALC898 commonly on X79, both gigabit Ethernet ports are also Realtek rather than Intel (or Broadcom), and only four DDR3 DIMM slots.  Personally, while these features are nice to be upgraded, from a personal perspective, they probably are not deal-breakers unless you specifically need the upgraded component.

In terms of auto-overclocking, this is one of the best ones we've seen, giving a 4.5 GHz CPU overclock, and applying an XMP profile, with just one option in the BIOS.  However, other overclocking methods are not as easy - I had difficulty using the auto-memory overclocks, and the CPU multiplier adjustment didn't seem to work, leaving only the CPU strap and BCLK to adjust.  Visually, I like the ECS style, with the black, grey and white, and everything is laid out on the board relatively easy to get to.  The board itself comes with a 3-year warranty for parts, 2-year for labor.

There were some initial hindrances in the X79R-AX review sample I received.  I was confused about some of the SATA ports labeled SAS, given that SAS compatibility was pulled from the Sandy Bridge-E specifications, but this was remedied by installing Intel RST in the OS.  On my shipping BIOS (11/10/2011), there were also issues relating to Turbo not being applied to the CPU.  This was fixed in the latest BIOS I was shipped (12/26/2011), which should be online shortly.  I have also fired a list off to ECS for some suggested changes to default settings to help consumers, but nevertheless, with the features on board, for the price (and the rebate), ECS have a very attractive offering. 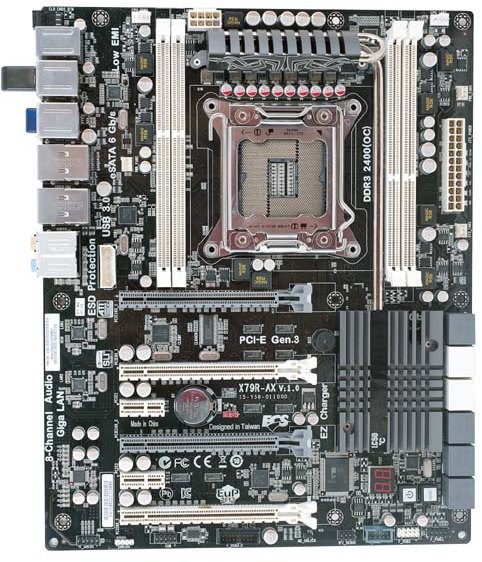 As mentioned previously, I like the ECS color scheme of black, white and grey.  Anything that cannot be changed and is in the background is black, and everything else is grey/white.  For your money, the first thing users will see is that there are only four DDR3 DIMM slots, compared to some models in this price range having eight.  The pros and cons of having eight slots over four are debated wildly across the internet, and it comes down to need – if you want more than 16 GB (4x4 GB) of memory in your system (assuming you are not willing to spend $$$ on 8 GB modules).  For most enthusiasts (gaming, overclocking), the answer is probably no, whereas for media editing, rendering, VMs or simulation, you may need more.

Around the socket itself we have a tight squeeze with the DIMMs and the VRM cooler.  The VRM cooler is connected via heatpipes to the chipset cooler, and also sports ECS' new 'Qooltech IV' technology.  This is essentially a strip (or as ECS put it, 'thermal chromic technology') with chemicals that change color (black/transparent to orange) above a certain limit, akin to what you may have had put on your head as a child to check your temperature.  The downside I found is that my CPU cooling obscured this, making it quite irrelevant to the product.  Even with the extra temperature strip on the chipset heatsink, that was obscured mainly by my dual GPU setup.

In terms of fan headers, the board has five - two four-pin CPU headers at the top of the board (one either side of the VRM), a three-pin PWR fan to the left of the socket and two 3-pin (one SYS and one PWR) straddling the 24-pin ATX power connector.  This means no fan connectors at the bottom, which is a shame.  These fans are either controlled via the BIOS, or the eSF software provided by ECS will adjust the SYS fans via a hysteresis loop.  More on that later.

Moving down the right hand side of the board are the abundant SATA ports.  From top to bottom, we have two SATA 6 Gbps from the PCH in grey, four SATA 3 Gbps from the PCH in white, four SATA ports labeled 'SAS' from the PCH in grey, then another two SATA 6 Gbps in grey from an ASMedia controller labeled EXSATA.  Officially, these last six are not supported by the chipset, but are still in the silicon.  They have to be enabled in BIOS, then again in the OS by Intel RST - this can be frustrating slightly if you just plug in your hard-drive and expect to be able to install an OS straight away.  I suggest using the top six connectors until everything is installed, or keeping the bottom six ports purely for storage devices. 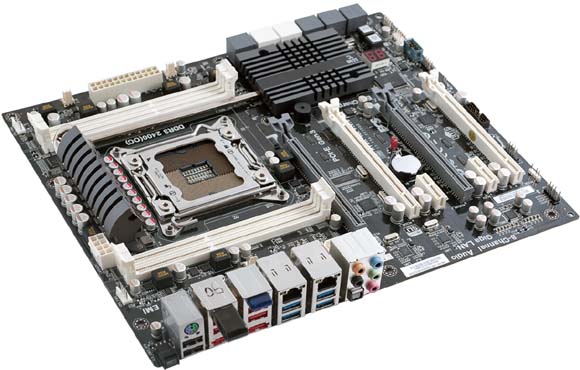 The south side of the board is relatively empty compared to others, with only two USB 2.0 header, one USB 3.0 header, a COM header, front panel connectors and SPDIF output.  One thing which does annoy me slightly on ECS boards is the lack of printing on the PCB where the connectors for the front panel should go - this is commonplace on almost every other manufacturer, so users do not need to pull out the manual.  For a reviewer, the Power/Reset buttons are a help in this regard, but for users fiddling inside a case, this info should be there on the board itself.  Also of note down the bottom of the board is the Debug LED for diagnosing issues.

In terms of PCIe layout, Simple Makes It (a) Lot Easier with the ECS board, sporting four PCIe full length slots each separated by a gap, and thus in x16/x8/x16/x8 configuration (the second x16 becomes x8 when the fourth slot is populated).  In between these are a pair of PCIe x1 slots, meaning no PCI connectivity.

The IO panel is awash with USB ports, making up for the lack of headers on the board itself.  From left to right, a clear CMOS button, PS/2 connector, two USB 2.0 ports, then the WiFi dongle (antenna is attached to this dongle and comes with the board), two more USB 2.0 ports, an eSATA 6 Gbps port, a blue Bluetooth dongle, two more USB 2.0 ports, and an eSATA 6 Gbps port.  Onto the two Realtek Gigabit NICs, and the four blue USB 3.0 ports.  Finally we have the audio jacks and SPDIF digital output.