The S23A can produce more light output than many monitors, with over 300 nits of light output possible. While in most cases I would say this kind of light output is a crazy amount that few people will use, the highly glossy screen on the Samsung might make this much light output useful if you have a lot of reflections around your work area from windows or overhead lights. Additionally, Active 3D glasses will cut the light output in more than half, as each eye only views the display half the time and they have tint to them, so ~25% of that light output would be 80 nits. It also manages 76 nits with the backlight brightness set to the minimum, so that gives you a very wide range to adjust the monitor to your preference. 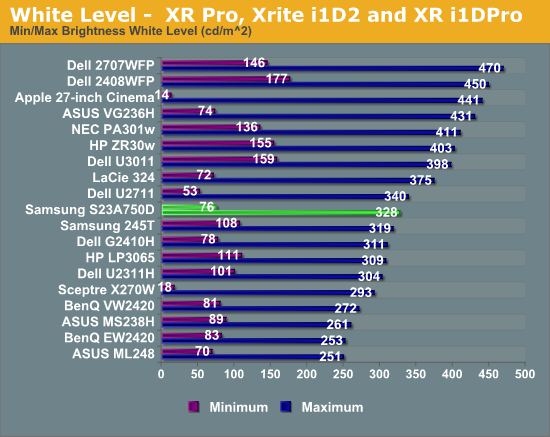 The black output level on the Samsung falls right into the expected range for the monitor. I was a bit disappointed with this as Samsung has managed to get darker blacks out of their LED edgelit TVs, so I was hoping more of that technology would copy over to their monitors. As it is, it’s a little on the bright side for a monitor of this size. 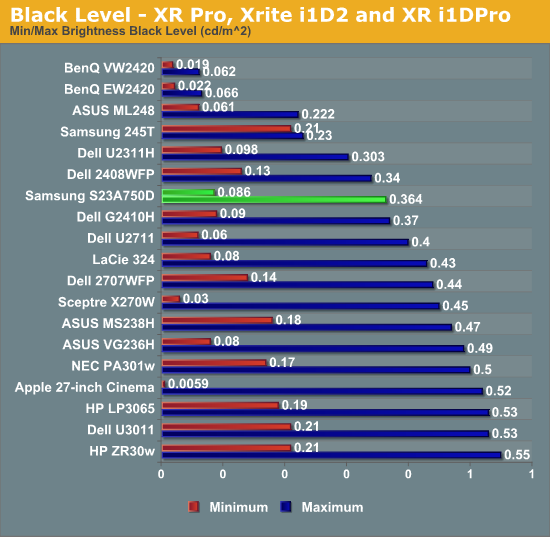 Despite the brighter whites, the black levels rise as well and so the contrast ratios are a pedestrian 900:1 on average. That's neither spectacular nor disappointing; the contrast ratio is merely average for 2011. As usual, we test without dynamic contrast enabled, as the change in backlight intensity tends to be visible and distracting, though Samsung claims up to a 5 million to 1 contrast ratio with dynamic backlighting. (I'm not sure how they'd get there, considering the maximum white level divided by the minimum black level only results in a contrast of 3813:1; they would almost need to shut off the backlight entirely to get down to the necessary 0.000064 nits black level.) 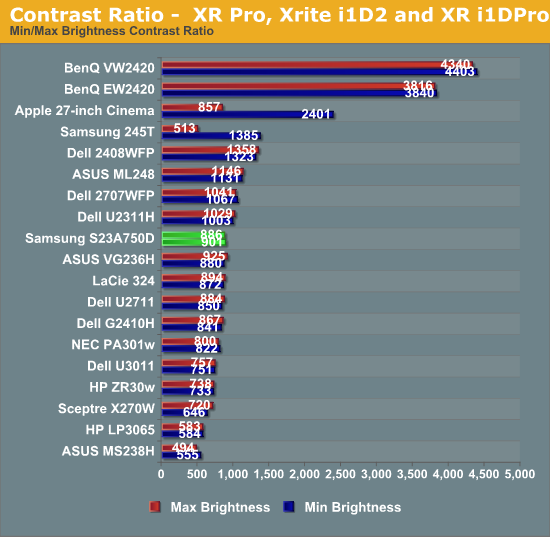 The black uniformity was a little better, though the higher black level overall meant that none of the values were spectacular. The same lower-right area that was darker in the brightness measurements was also darkest in the black measurements, so the backlight just seems to not be as powerful in that area.