Back at SIGGRAPH 2011 NVIDIA announced Project Maximus, an interesting technology initiative to allow customers to combine Tesla and Quadro products together in a single workstation and to use their respective strengths. At the time NVIDIA didn’t have a launch date to announce, but as this is a software technology rather than a hardware product, the assumption has always been that it would be a quick turnaround. And a quick turnaround it has been: just over 3 months later NVIDIA is officially launching Project Maximus as NVIDIA Maximus Technology.

With Maximus NVIDIA is seeking to do a few different things, all of which come back to a single concept: utilizing Quadro and Tesla cards together at the tasks they’re best suited at. This means using Quadro cards for graphical tasks while using Tesla for compute tasks where direct graphical rendering isn’t necessary. Ultimately this seems like an odd concept at first – high end Quadros are fully compute capable too – but it’s something that makes more sense once we look at the current technical limitations of NVIDIA’s hardware, and what use cases they’re proposing.

The fundamental base of Maximus is NVIDIA’s drivers. For Maximus NVIDIA needed to bring Quadro and Tesla together under a single driver, as they previously used separate drivers. NVIDIA has used a shared code base for many years now, so Tesla and Quadro (and GeForce) were both forks of the same drivers, but those forks needed to be brought together. This is harder than it sounds as while Quadro drivers are rather straightforward – graphical rendering without all the performance shortcuts and with support for more esoteric features like external synchronization sources – Tesla has a number of unique optimizations, primarily the Tesla Compute Cluster driver, which moved Tesla out from under Windows’ control as a graphical device.

The issue with the forks had to be resolved, and the result was that NVIDIA was finally able to merge the codebase back into a single Quadro/Tesla driver as of July with the 275.xx driver series. 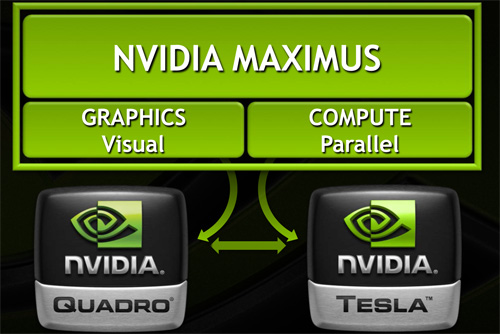 But this isn’t just about combining driver codebases. Making Tesla and Quadro work in a single workstation resolves the hardware issues but it leaves the software side untouched. For some time now CUDA developers have been able to select what device to send a compute task to in a system with multiple CUDA devices, but this is by definition an extra development step. Developers had to work in support for multiple CUDA devices, and in most cases needed to expose controls to the user so that users could make the final allocations. This works well enough in the hands of knowledgeable users, but NVIDIA’s CUDA strategy has always been about pushing CUDA farther and deeper in the world in order to make it more ubiquitous, and this means it always needs to become easier to use.

This brings us back to Optimus. With Optimus NVIDIA’s goal was to replace manual GPU muxing with a fully transparent system so that users never needed to take any extra steps to use a mobile GeForce GPU alongside Intel’s IGPs, or for that matter concern themselves with what GPU was being used. Optimus would – and did – take care of it all by sending lightweight workloads to the IGP while games and certain other significant workloads were sent to the NVIDIA GPU. 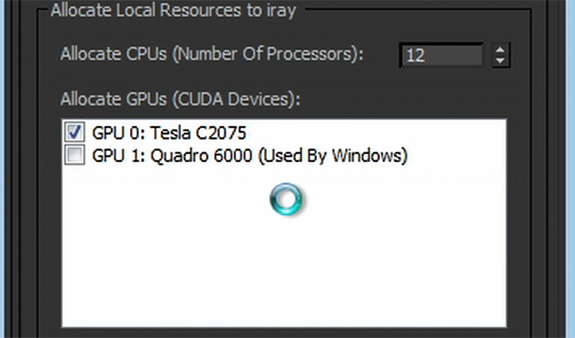 Maximus embodies a concept very similar to this, except with Maximus it’s about transparently allocating compute workloads to the appropriate GPU. With a unified driver base for Tesla and Quadro, NVIDIA’s drivers can present both devices to an application as usable CUDA devices. Maximus takes this to its logical conclusion by taking the initiative to direct compute workloads to the Tesla device; CUDA device allocation becomes a transparent operation to users and developers alike, just like GPU muxing under Optimus. Workloads can of course still be manually controlled, but at the end of the day NVIDIA wants developers to sit back and do nothing, and leave device allocation up to NVIDIA.

As with Optimus, NVIDIA’s desires here are rather straightforward: the harder something is to use, the slower the adoption. Optimus made it easier to get NVIDIA GPUs in laptops, and Maximus will make it easier to get CUDA adopted by more programs. Requiring developers to do any extra work to use CUDA is just one more thing that can go wrong and keep CUDA from being implemented, which in turn removes a reason for hardware buyers to purchase a high-end NVIDIA product.