As one would expect for a dual GPU card, the GTX 560 Ti 2Win is quite large. At 11.5” long we’ve seen larger cards, but not many. This is actually .5” longer than the dual-GF110 GTX 590, with EVGA eschewing a compact design for cooling. Similarly, while the card is technically only 2 slots wide the fans and shroud sit well above the card, and as a result the card is closer to 2.5 slots wide, making it a de facto triple-wide card.

Tearing apart the card we find the two GF114 GPUs sitting on top of EVGA’s custom PCB. Interestingly EVGA has rotated them 90 degrees each, which is a notable decision since the complete GF114 package is quite rectangular. 16 Hynix 1Gb GDDR5 modules are located on the PCB, 4 surrounding each GPU on both the front and back sides. These modules are rated for 5GHz, well over both the stock speed (4GHz) of the 2Win and what the hardware itself would be capable of. Meanwhile PCIe bridging for each GPU is provided by the ubiquitous NVIDIA NF200 bridge chip. NF200 is capable of providing each GPU with a full PCIe x16 connection, although the card as a whole is still limited to a single x16 link for communicating with the rest of the system.

Direct cooling for the GPUs and for the NF200 bridge chip is provided by a pair of individual aluminum heatsinks, with each one featuring a pair of heatpipes running out to the far edge of the heatsink. I’m not sure whether it’s intentional or not, but these heatsinks are very similar in design to the reference GTX 560 Ti heatsink, which is a good sign given the 560 Ti’s impressive cooling attributes.

Sitting above the heatsinks and mounted into the shroud are the 2Win’s 3 75mm fans, which results in an “all fan” design that has fans running virtually the entire length of the card. These fans are independently controlled, with 2 fans attached to one GPU and the last fan attached to the other GPU, allowing the 2Win to adjust its fan speeds based on the needs of the active GPU(s). In practice this means that when only 1 GPU is in use (e.g. a game that doesn’t support SLI), the 2Win doesn’t need to rev up unnecessary fans. The design of the fans and the shroud means that this is a completely open design with only a small amount of warm air being ejected outside through the PCIe bracket. So buyers will need a particularly airy case to handle the heat the 2Win will be dumping into the surrounding environment.

Looking towards the rear of the card we see that power is provided by 2 8pin PCIe power sockets. This means the 2Win can safely draw up to 375W of power, although without overvolting we’d estimate that the card draws no more than 330W. EVGA’s official specs call for a 700W power supply, which is the same as the GTX 590.

As for display connectivity, thanks to having 2 GPUs on board EVGA is able to drive up to 4 displays rather than the usual 2 for an NVIDIA card. EVGA has broken this up into 3 DL-DVI ports and a mini-HDMI port. This should efficiently cover triple monitor setups, but if you want a 4th monitor it will be limited to 1920 @ 60Hz. Meanwhile the SLI connector next to the PCI bracket is a bit of a red herring – 4-way SLI is not supported for the 2Win; given the hardware this is presumably an NVIDIA limitation as they have only ever supported 3 and 4-way SLI on their high-end GPUs.

Update 11/07: While there were some issues with this on the GTX 460 2WIn, this has apparently been resolved (the presence of NF200 shouldsatisfy all SLI license requirements in the first place). EVGA has said that the 2Win will work on non-SLI mobos, making it fully compatible with every motherboard.

Rounding out the hardware side of the package, EVGA has included the usual assortments of dongles and converters. 2 2x6pin to 1x8pin PCIe power adaptors are included for any buyers that don’t have a PSU with 8pin PCIe power plugs. Meanwhile a mini-HDMI to HDMI adaptor is provided to better utilize the HDMI port on the card, and a single DVI-to-VGA dongle is also provided.

As for the software side of the package, EVGA includes their customary overclocking & monitoring tools: EVGA Precision, and the EVGA OC Scanner. These tools haven’t significantly changed since the last time we’ve seen them, but then they don’t need to. Precision is still one of the best monitoring and overclocking utilities available thanks to its RivaTuner heritage, meanwhile the OC Scanner is a nice addition to EVGA’s tools to make it easier to test whether an overclock is suitable by looking for rendering artifacts. In practice I’m not sure how much use these tools will get with the 2Win – GF114 has a lot of headroom, but dual-GPU cards are known to be fickle about overclocking. 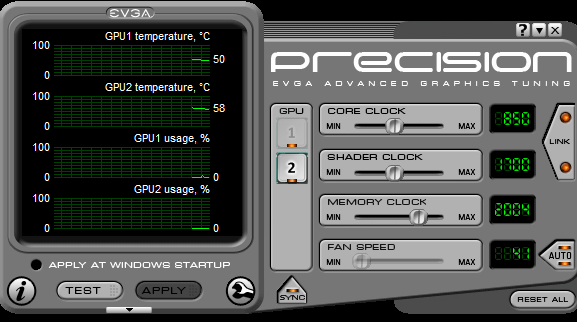 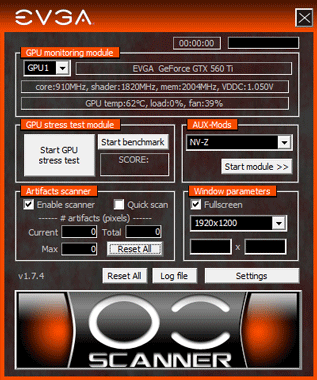 Finally, for warranty service our retail sample is a KR part, indicating that it comes with a 3 year warranty. Typically EVGA offers multiple warranties, and on a historical basis the GTX 460 2Win was available with both a 3 year and lifetime warranty.