Next up I went to calibrate the monitor using an i1D2 colorimeter from Xrite and a copy of ColorEyes Pro using a MacBook Air as the test platform. Initially I attempted to do the calibration on my Windows 7 machine, but my video card seemed to have an issue with the LUTs and ColorEyes, as the dE performance got worse after the calibration than before. Performance on the Mac seemed to be correct and more in line with what is expected after a calibration.

One downside of ColorEyes is that it doesn’t specify the DeltaE formula used and so it is generally believed to be dE 1976 instead of the more recent dE 1994 or dE 2000 formulas that take into account perceptual factors better. With dE 1976 any value below 1.0 is considered perfect for all practical considerations, while a value below 2.0 is considered good enough for print applications. Values below 3.0 are considered invisible to the naked eye and are really the target for all calibrations. 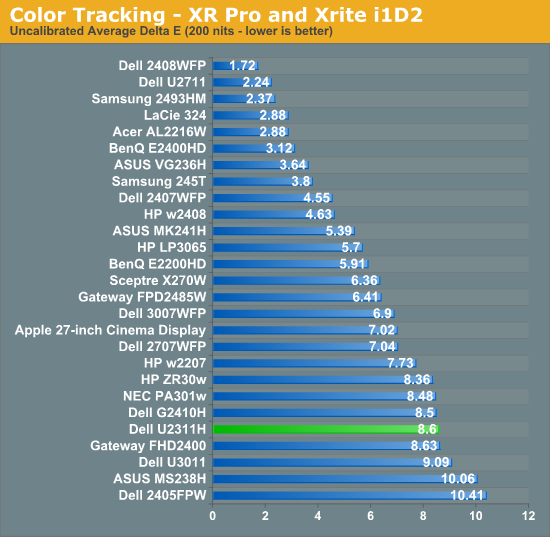 First we looked at the uncalibrated performance with the monitor set to 200 nits and using the include ICM profile from Dell. As you can see, we wind up way off our target dE of 3.0 with an average of 8.6 and a peak value of 14.85. Compared to some other displays this actually isn’t too bad, but it’s nothing you would want to use for serious color work.

For the initial calibration, we used the Custom (RGB) mode on the Dell and calibrated the 100% White Point using the RGB gain controls to be as accurate as possible. We then set calibration targets of 200 nits, D65 for a white point, and a gamma target of 2.2. Once calibrated, we compared the results using the GregTag Macbeth color checker patterns. 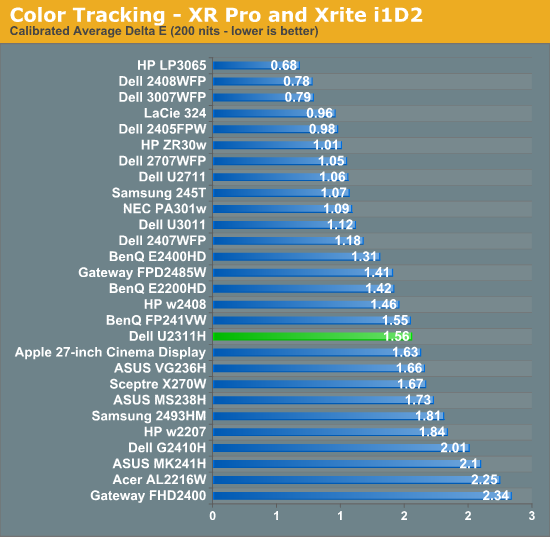 Once we calibrate the Dell, we see our average dE has dropped all the way down to 1.56 and the peak dE is at 5.03. Another thing to keep in mind is that the patches that are generating the highest dE values are ones that are made up mostly of blue. Given your choice, blue is where you want the majority of your dE to occur and green is where you want the least to occur, as the blue light is much lower in light output than red or green, and so errors are not nearly as visible to your eye as they would be in the other colors. Additionally, since the blue light output is much lower, it’s also harder for a colorimeter like the i1D2 to read and therefore more subject to reading errors than green would be. This could account for some of this error and a meter with better dark reading support could resolve that, though most people won’t have one of those for calibrating.

For print work, we then calibrated the monitor using the same specifications, only with a target of 100 nits instead of 200 nits. For a lit room most people would consider this to be too dark of an image, but for print work its much closer to what your actual output would look like. 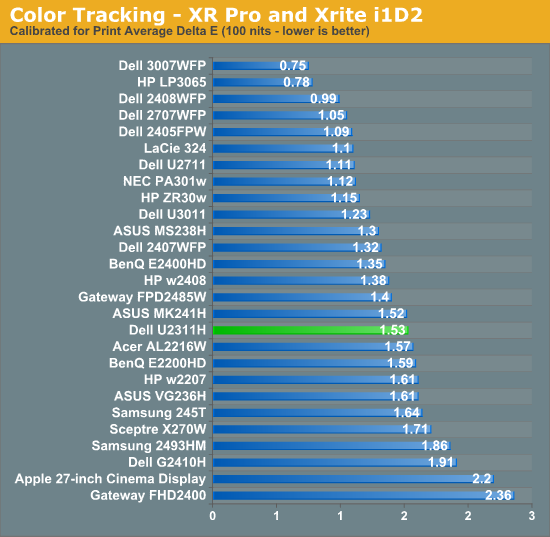 Our average dE here is almost identical at 1.56 but the peak dE is down to 4.75. Again these spikes are occurring in that range that is heavily blue and less noticeable by the human eye. There is a good chance that for the majority of your work you will not have a color error that is visible to the naked eye.