ECS P67H2-A Review: A visit back to Lucid's Hydra

Nothing too much out of the ordinary from the box bundle - at this level, the USB 3.0 Front panel should be standard (even if you can't use it with two full length GPUs in there), and ECS fill their box with enough SATA cables to plug a drive into every internal SATA port.

We’ve previously looked at ECS’ software package in our coverage of the ECS P67H2-A2 and the ECS H67H2-M.  Not much has changed - even the issues I found are still here.  For example, the BIOS Live Update utility did not detect the latest version on the website, so I had to search for it manually, the BCLK can only be changed with the right BIOS option enabled, and as the voltage continually switches between states, actually setting it in the OS can be hazardous if you set the idle state high (so the load state goes even higher) or set the load state low (so the idle state goes even lower) - this is all due to the BIOS using voltage offsets, rather than actual values. 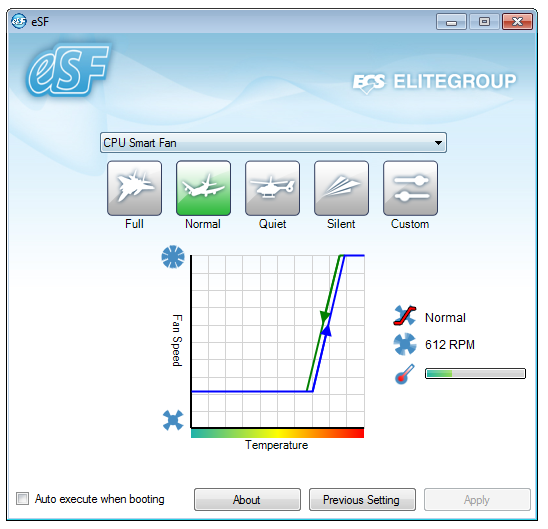 The Smart Fan utility controls the CPU fan header only for the P67H2-A, in either one of the preset modes, or the custom setting allows for hysteresis on the speed up/down modes. 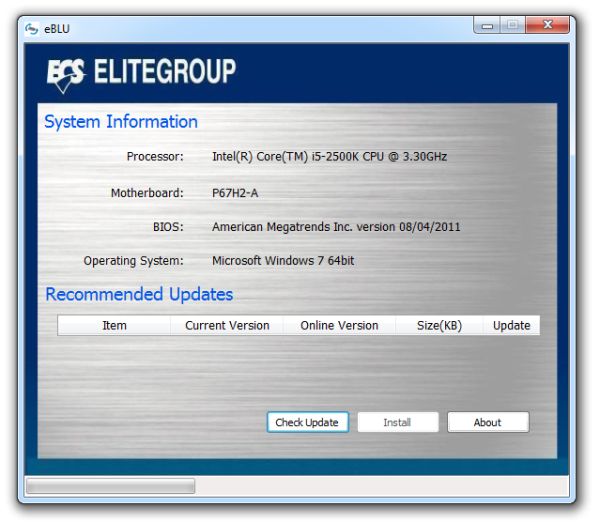 The Live Update software, as mentioned above, could not find the latest version of the BIOS on the ECS servers, and thus I had to search for the BIOS myself. 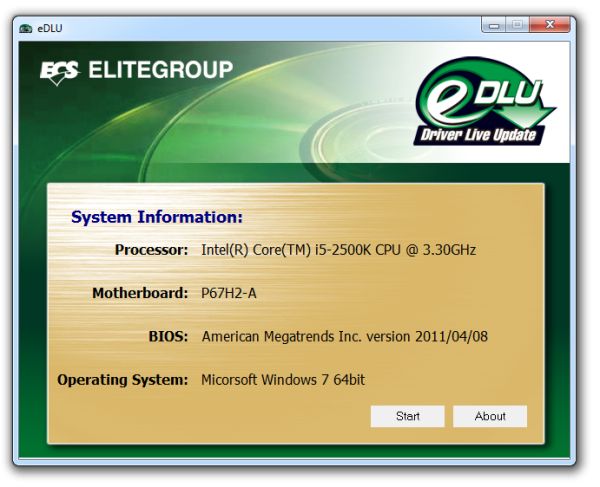 The Download Live Update system is not what you think - rather than searching your OS for the state of the drivers, and then probing the ECS servers to check the versions, and asking the user to download them from the software, eDLU is essentially just a link to the driver update page for the P67H2-A on the ECS website.

The eGS software is relatively redundant on the Sandy Bridge platform.  With this utility, the idea is that the software will reduce the CPU clock speed in idle situations.  Sandy Bridge processors do that anyway, reducing to the 16x multiplier when idle.

In terms of what we have seen from other overclocking utilities from other manufacturers, eOC is pretty low down on the ladder to begin with - it is essentially software from the socket 775 era software, modified for P67. 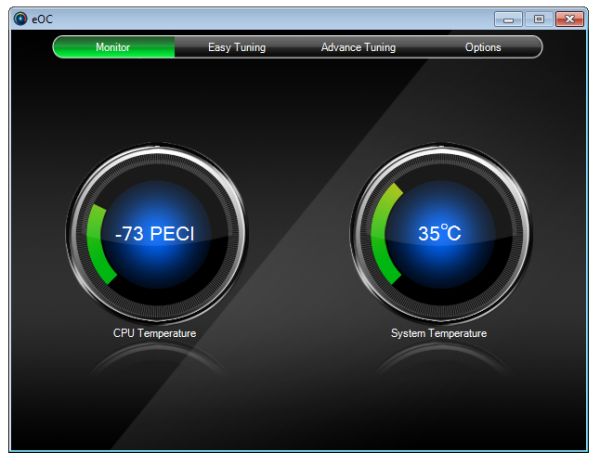 The main page is a simple temperature monitor for the CPU and 'System' temperatures. The CPU temperature is measured in terms of PECI, or the number of degrees before the CPU is throttled due to thermal limitations, rather than an absolute value. 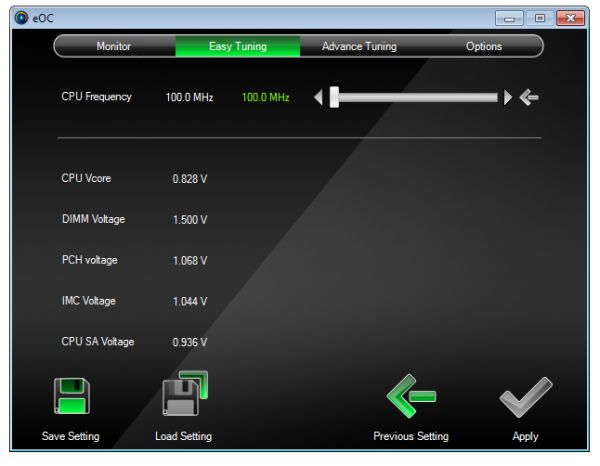 The Easy Tuning tab gives voltages and a CPU Frequency slider, allowing you to adjust the CPU frequency. This slider is the throwback from socket 775 days, when BUS frequencies could reach several hundred MHz—as such, it offers between 100 MHz and 200 MHz in 1 MHz intervals, even though a Sandy Bridge processor can only manage a few MHz due to its integrated clock generator subsystem.  Given my stress in getting this option to work when it was on the P67H2-A2, I know now that two obscure BIOS options need to be enabled (both ‘ICC Set Clock Enables’ and ‘Send ICC Lock Registers’) for the eOC software to apply a CPU frequency. As we’re limited to per MHz values, it’s pretty coarsely grained. Also, any change here directly changes the values in BIOS. 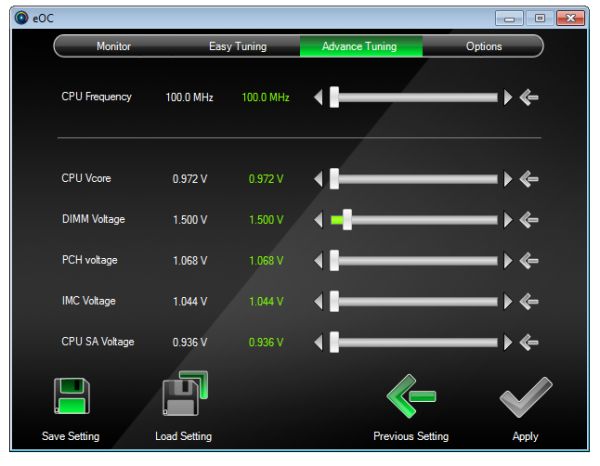 The Advance Tuning menu gives you power over the motherboard voltages. These settings work out of the box, but as mentioned previously and found on the P67H2-A2, the issue here is with the CPU voltage.  On idle, the CPU will flicker between various low state voltages, and this slider value will flicker too. So if you want to select 1.2 V, you need to make sure what state the CPU is in at the time and apply it at the right moment. If a high voltage is selected at a low CPU state, you could end up with a potentially damaging high voltage in a full CPU load scenario. 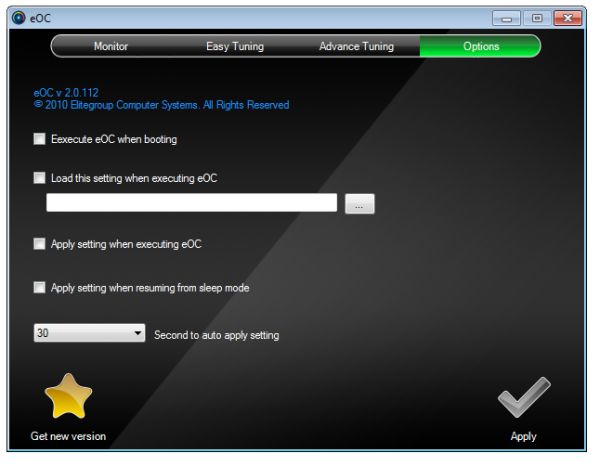 The Options menu, apart from the spelling mistake, doesn’t really do much, apart from enabling a saved eOC to enable itself at bootup.

The eJiffy software is a quick-boot technology which loads the user into a simple Linux interface through which they can access the web. Loading into eJiffy is very quick compared to an SSD and Windows combination, and gives a simple Mozilla type web browser, suitable for when a user wants nothing more than to browse. We covered eJiffy in more detail in our H67 ECS review as it is a pretty neat addition and we rather like it—read here for more details.