IBM's ThinkPad T42 LCD: A Blast from the Past

IBM's ThinkPad T42 LCD: A Blast from the Past

As a vocal proponent of improving laptop LCD quality—and LCD quality for desktops as well—the past few years have been painful. True, laptop LCDs have never been at the level of their desktop counterparts, but once upon a time there were at least a few laptops that didn't use TN panels. One of those is the vaunted IBM ThinkPad T42, launched way back in 2004. Besides coming before virtually everything migrated to widescreen displays, the T42 is one of the few laptops to use an IPS panel. As luck would have it, I recently had a chance to use a T42, and I took the opportunity to run it through our standard set of LCD tests. Mostly I was curious to see the results, but I figured some of our readers would enjoy getting our impressions of this archeological find as well. 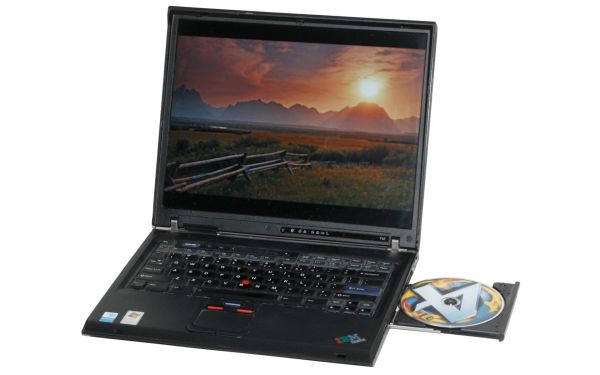 Before we get to the display, let's make a few other points about this venerable old soldier. First, it's absolutely astonishing how well a six-year-old laptop continues to hold together—a true testament to the ThinkPad engineering team. The LCD hinges are still fully intact and work well, the chassis still feels solid, and the particular T42 I had access to is even running Windows 7…and running it rather well, actually! Of course, this was no entry-level laptop back when it was purchased. It has 2GB of DDR-266 RAM, a fast 1.8GHz Pentium M 745 (Dothan) processor, and it even includes a powerful (at the time) Mobility Radeon 9600 with 64MB of RAM. You might laugh at some of those specs, but this system will still run circles around Atom and it checked in at roughly $2500 at the time of purchase. Then again, six years of use for $2500 is pretty darn impressive.

About the only area where the T42 truly struggles compared to modern laptops is in handling HD video; sadly, the Radeon 9600 has no video decode acceleration for H.264 content, so even standard YouTube content can feel a bit choppy, and forget about HD videos. Going fullscreen on SD YouTube (and other Flash videos) definitely struggles, but not to the point where I'd say it's unwatchable—but again, forget about the HD videos. Another component that fails to impress after all these years is the old 80GB 5400RPM Fujitsu hard drive, and with its IDE interface you won't be upgrading to one of the latest and greatest SSDs. Outside of HD multimedia, however, the T42/Pentium M platforms of old still run well enough for most tasks. General office and Internet use isn't a problem, and Windows 7 32-bit gets along quite well with the 2GB RAM. Where most consumer laptops from 2004 have long since retired to the scrap heap with broken hinges, casing, failed motherboards, etc. the ThinkPad keeps plugging along.

But then, you didn't come here for a review of the T42 six years after launch. My main interest in this laptop is the LCD; all it takes is a few seconds looking at the display from acute vertical angles and it becomes immediately apparent that this is not your typical TN panel. As a point of reference for just how easy it is to tell the difference, look at the shots below showing the T42 with the Dell E6410. The E6410 LCD is substantially brighter (200nit laptops simply didn't exist in 2004, let alone 300nit options), but the above and below angles are all but useless.

The sheer brightness of the E6410 can be misleading, and clearly a dim panel from 2004 isn't going to win every comparison. However, laptops are devices where you frequently view content from above or below (i.e. sitting in a cramped airplane seat), and forcing everyone to use TN panels with lousy vertical viewing angles definitely isn't in our best interest. The technology was in use over six years ago, and there's nothing to stop LCD manufacturers from offering better panels…other than the almighty bottom line.

Before we get to the charts, the other item worth discussing is the resolution and aspect ratio. I don't have a major problem with widescreen displays, but there's a limit to how far we should go, and 16:9 is either at the limit or beyond it depending on your perspective. Widescreen is nice for movies (as long as they're also widescreen), but for most other tasks regular displays work fine, and 768p in particular is a very bad resolution to standardize on. With a WUXGA or even 1080p display, there's at least enough room to view two document/web pages side by side, but drop to 1366x768 and all you get is a short display that's a bit wider than your average website. The T42 I'm looking at has a 15" SXGA+ (1400x1050) display, which works out very nicely on this size chassis. Comparing it to a modern Dell Latitude E6410, the Latitude is about .4" wider but the T42 is a good 1" to 1.2" deeper/taller. The T42 dot pitch is also slightly finer (125dpi vs. 120dpi on the 14.1" WXGA+). 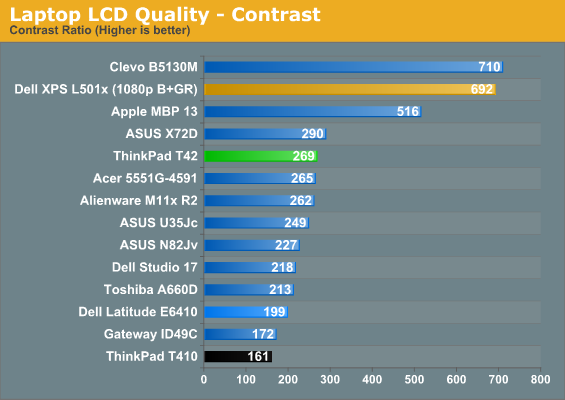 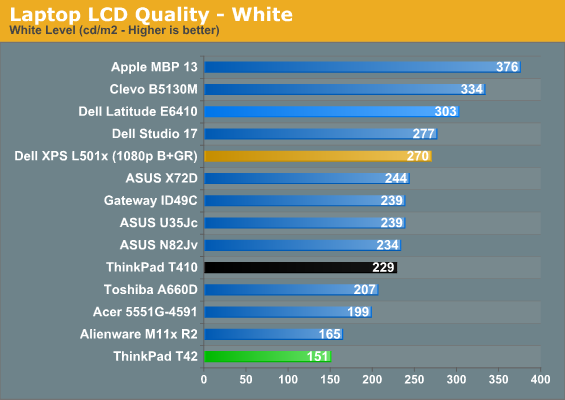 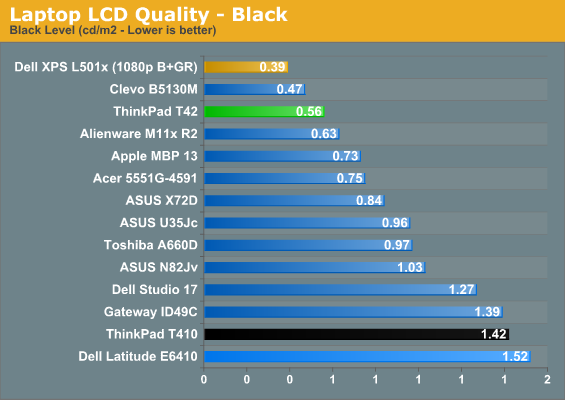 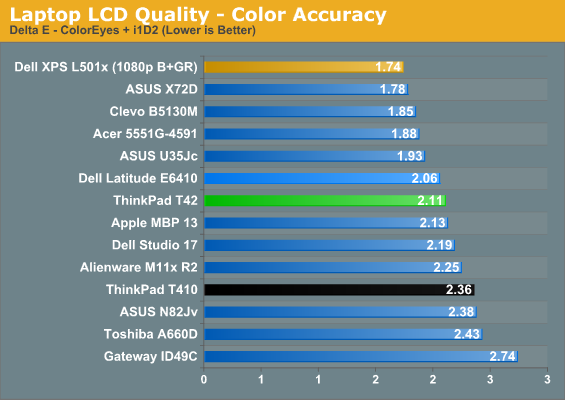 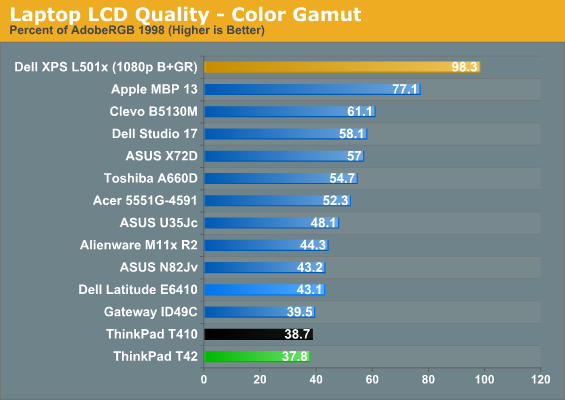 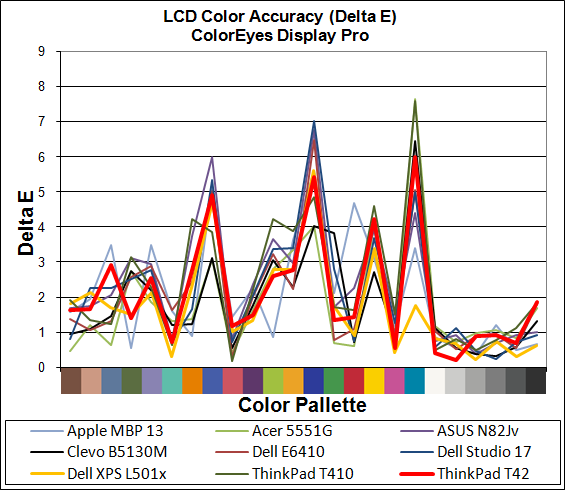 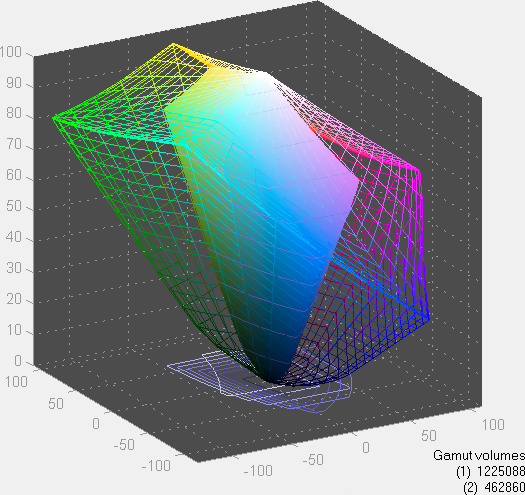 So after all the good things we've said, you might have expected this to be a clear cut decision in favor of the ThinkPad Flexview displays. While it definitely wins the vertical viewing angle comparison, in other areas it's still a product of its time. Color accuracy is good if not great, but the contrast ratio is only moderately higher than most modern LCDs at 270:1. Granted, we're looking at a matte LCD (another bonus point!), so if this were a modern glossy equivalent you'd be looking at around 325:1, but then there are plenty of other things that have changed.

One big change is the backlighting, which is why a six-year-old LCD manages a color gamut of just 39% and 150nits brightness, both at the bottom of our charts. Besides providing for potentially improved color gamut—obviously, you can still have a low color gamut as the T410, E6410, and other laptops show—modern LED backlighting is typically far brighter than any old CCFL backlight. Even at maximum brightness, there are plenty of times where the T42 LCD still feels dim.

Ultimately, what I'm most interested in showing is how viewing angles really do matter on laptops and the difference an IPS panel can make. Apple is one company that actually understands this, as they used an IPS panel in the iPad. That's something many of the competing slates are completely overlooking, with the result being a tablet that you can't look at from certain angles. And with a modern IPS display, the iPad manages a stunning near-1000:1 contrast ratio. For obvious reasons (touch screen), the iPad has a glossy, scratch-resistant coating, but even with the 20% "matte contrast tax" you can easily make matte IPS displays that achieve 750:1 or higher contrast. I would love to see some laptop manufacturers push the LCD makers to create more such panels. I don't care if they cost $150 more, provided the quality is there—just imagine something like the high color gamut RGB LED backlit displays, only coupled to a matte IPS panel.

What I have to wonder is if all of this talk of laptop LCDs only matters to a small percentage of users. Obviously IBM tried to offer IPS in the Flexview displays six years back; why don't they still have that option? HP's EliteBook 15" and 17" have the DreamColor IPS panels as a modern alternative, and we'll look at one of those shortly, but it's a costly upgrade. If there were more quality panels in use, economies of scale comes into play and prices go down, but it doesn't look like there's much interest in creating less expensive IPS panels when you can make even cheaper TN displays.

Perhaps the majority of buyers spoke, and what they said is that they don't care about LCD quality. Or more accurately, they probably said that they're okay with lesser displays as long as the price is substantially lower. Today, we're stuck with tons of low contrast, 16:9, 768p, glossy TN panels as a result, and unless/until we see OLED or some other technology move to the forefront, that trend looks set to continue. What can we do about changing the current status quo? Beyond writing articles like this and praising high quality laptop LCDs, I'm out of ideas, but feel free to join me in the comments by asking for better display options!

Update: Ironically, as I was testing this old T42 laptop, Dustin was putting the finishing touches on his HP EliteBook 8740w review. $2500 for the ThinkPad T42 back in 2004 probably sounded like an awful lot of money, but it held up well over the years. Perhaps the 8740w (or the slightly smaller 8540w) can do the same, and to the best of my knowledge HP's DreamColor laptop LCDs are one of the few current IPS panels shipping. I'm not sure if there are any others. The ThinkPad W510 is an RGB LED panel but it's still TN I believe; the W701ds uses the same RGB LED backlit panel as the Dell M6500, again not IPS. (Please correct me if I'm wrong, though!)